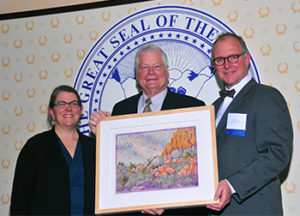 The 2015 Judith Winzeler Award for Excellence in the Humanities, presented to Trish L. Geran and UNR Professor of English Phil Boardman. Photo: UNR

Nominations are open for the 2017 Nevada Humanities Awards, which honors outstanding individuals and organizations dedicated to the humanities.

Every other year the statewide Nevada Humanities organization awards four different honors, all promoting human experience and striving to enhance opportunities for Nevadans to engage with the humanities.

Awardees, selected from the nominations and finalized by members of the Nevada Humanities Board of Trustees, are honored at a special ceremony at the Governor’s Mansion in Carson City on March 30.

“We encourage people from all across Nevada to identify individuals and organizations in their communities that have enriched their lives with literature, history, culture, outstanding teaching, and all elements of the humanities,” commented Christina Barr, executive director. “It is the important work and legacies of these Nevadans that we want to honor with these awards.”

The 2017 Nevada Humanities Awards include:

An individual or organization can choose to nominate for each award, however the Outstanding Humanities Project Award may only be nominated by the project’s sponsoring organization. Multiple nominations may be submitted in the same or different award categories. Awardees will be notified in early February 2017. The awards will be presented in a special ceremony in Carson City on March 30, 2017, and all awardees must be present to receive their awards.

For details and questions, contact Nevada Humanities at 775-784-6587 or visit nevadahumanities.org.