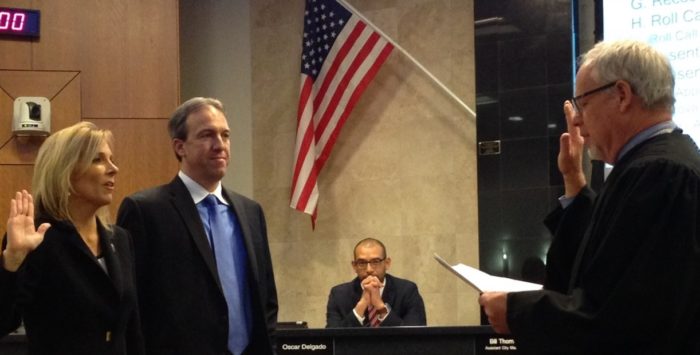 Neoma Jardon, with her husband, is sworn into her second term. Photo: Carla O’Day

The Reno City Council on Wednesday canvased election returns as four council members and three judges were sworn in during a ceremony at City Hall.

“When you run two campaigns as I have, underfunded to your opposition, your reliance is really upon a broad conglomeration of committed supporters and volunteers,” Brekhus said. “I’ve had so many and I appreciate all the investment, trust and faith you’ve put in me over the last few years now.” 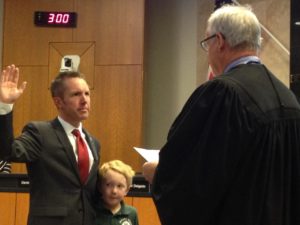 Voters retained Councilman David Bobzien, who holds the at-large seat. He defeated Sam Kumar by 68.1 percent to 31.1 percent. Bobzien was appointed to the council two years ago when then-councilwoman Hillary Schieve was elected mayor.

“This was a very special election because my whole family was involved this time,” said Bobzien, with his elementary school-aged son alongside him. “It was wonderful to have them be a part of this and be at an age where they understood what was going on—following the issues, following politics nationally and locally—and we got to knock on some doors.”

“As an elected official, particularly a judge, you’re not allowed to make a promise,” O’Neill said. “But I want to promise that I will treat everyone with respect and fairness. They will know that when they come out of my courtroom, they will have heard someone who listened to them; and even if they were ruled against, they’ll know they were treated fairly.”

Judge Dorothy Nash Holmes in Department 3 was re-elected without opposition to a second term and attorney Tammy Riggs ran unopposed for the Department 4 seat. Judges serve six years on the bench.