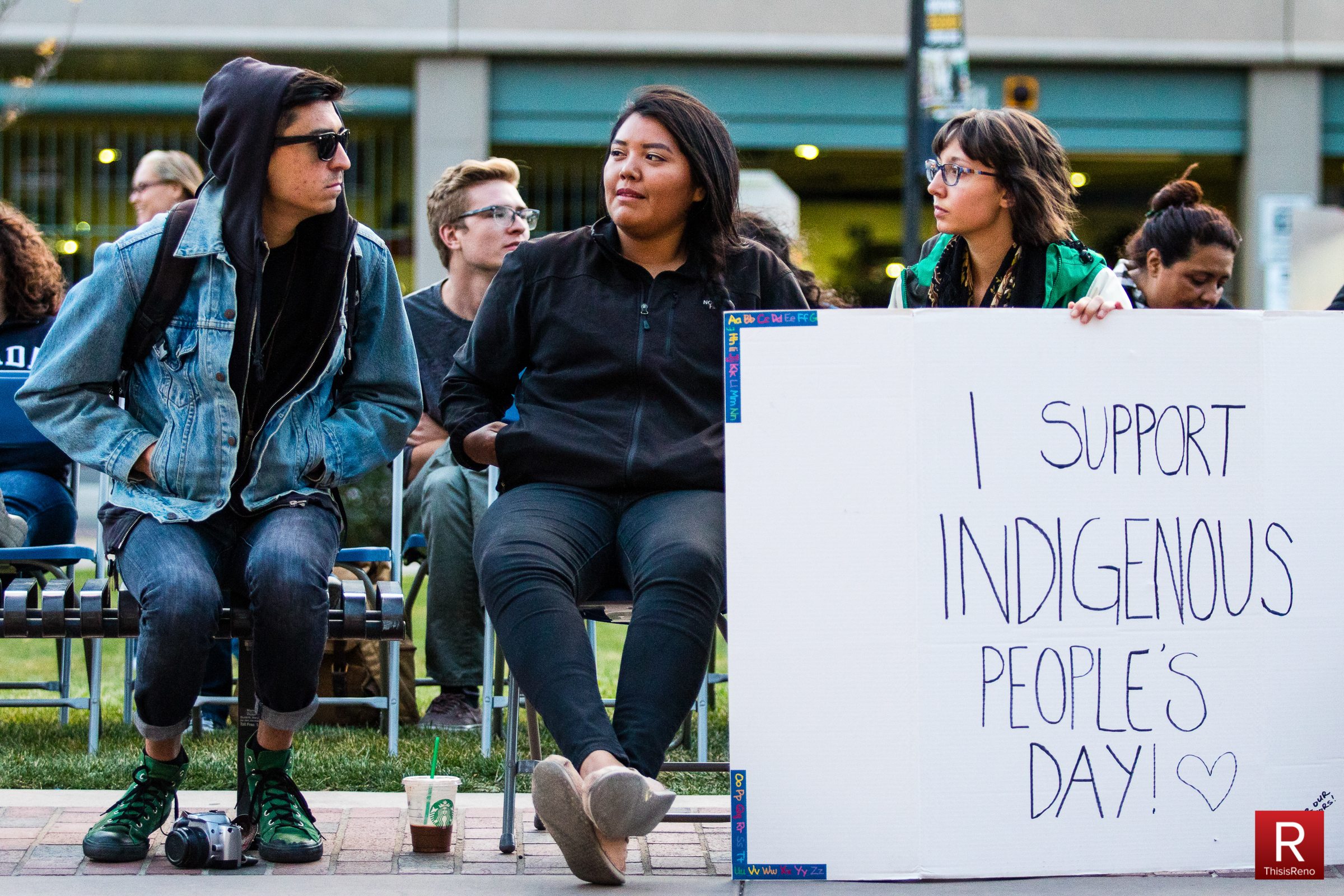 Members of the American Indian Movement of Northern Nevada called today for Reno Police Chief Jason Soto to step down in the wake of Monday’s protest clash where Nicholas Mahaffey drove his truck through a crowd of demonstrators.

“We, the Native American Indian Movement of Northern Nevada, are outraged by the actions of the Reno Police Department,” said Raquel Arthur.  “We are disappointed in the charges brought against the driver. It is unreasonable that the victims of this hate crime are being charged. We demand their release.

“It is not OK to have a double standard regarding self defense, based on race. The ‘factual account’ of events offered by the Reno Police Department did not include any of the eye witness accounts of the individuals stalking the Abolish Columbus Day Protest, the eye witness accounts of them yelling racial slurs, or the aggressive provocation that happened before the video began.”

Arthur said that the Columbus Day demonstration was to raise awareness about the historic genocide of Native Americans.

Arthur said that Mahaffey’s action were deliberate and premeditated.

“There was a group of Caucasian men sitting approximately 15 feet from our pray circle,” she said. “One of them, we now know as Nick Mahaffey, the driver, who had ill intentions from the beginning. If this was a man who feared for his life, why was he in our presence for over an hour prior to him plowing through a group of protestors with (a) total disregard to human life?

“If this was a man who feared for his life, why did he drive past once as we marched to the Reno arch, then turn around and come back, antagonizing, and being aggressive?

“If this was a man who feared for his life, why would he have his windows down to the truck he was driving?”

Soto said Thursday there were no recorded statements referencing race or religion, but the FBI is prepared to join the investigation if there is more information showing that a federal civil rights violation occurred.

He defended RPD’s response by saying it was unclear what had happened Monday when Mahaffey, 18, called RPD to say he had been assaulted by demonstrators, after he drove through the crowd.

Soto said RPD interviewed dozens of people and watched numerous videos as part of the initial investigation. Based on what he said was a factual timeline of events, Mahaffey approached the demonstrators aggressively from his truck and was punched in the face before accelerating into the crowd. His juvenile passenger was also punched in the face, Soto said.

Mahaffey was charged with provoking an assault, and James Fletcher and Samuel Harry are being charged with simple battery. Kitty Colbert, 59, was hospitalized with multiple fractures after being run over by Mahaffey.

The incident has sparked debate worldwide, with many weighing in on the videos either in support of Mahaffey or in support of the demonstrators. Many claim that the protestors are at fault for blocking Virginia Street.

Many others have said that the charge against Mahaffey is inadequate, and that Mahaffey should have been tested for drugs and alcohol when first interviewed by RPD after the incident.

“The charges being brought forth by Reno PD are an insult to the justice system,” Arthur said. “We are outraged. We are outraged by the complete fabrication that has been released by the Reno PD.”

“We’re in this for the long haul,” she said.