Married to Adventure: An Exhibit at The May Museum 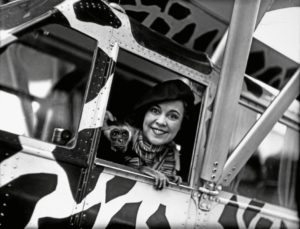 Osa Johnson with a gibbon on an airplane Date: ca. 1918-1936. Public domain image from the George Eastman House Collection.

Married to Adventure is the amazing true story of Martin & Osa Johnson, acclaimed explorers of the early 20th century.

Martin & Osa are credited with producing some of the very first wildlife and ethnographic documentaries. From 1917 to 1937 they traveled Africa and the South Seas photographing and filming the people and animals they encountered.

Their Hollywood-produced films were blockbuster successes in the States, making Martin & Osa a household name. Tragically, Martin was killed in a plane crash in 1937, but Osa continued their work, traveling abroad, making films, writing books, designing safari clothes for women. She even hosted the first wildlife themed television show!

The Married to Adventure exhibition at the May Museum tells the thrilling story of Martin & Osa through hundreds of their photographs. Visitors can also see some of their incredible films, including the first sound film ever produced in Africa!

The exhibition also features artifacts that Martin & Osa brought back from their travels, as well as ephemera from their years of Hollywood fame. Married to Adventure is a fascinating exhibition for anyone interested in the history, romance, and danger or world travel in the early 20th century.

Married to Adventure is open through October 30. Admission is $9 for adults, $8 for seniors, and $8 for children.

A Celebration of Color at the May Museum (sponsored)

May Museum kicks off holiday drive

May Museum Presents The Lost World of Dragons

Holiday Tuba Concert Set for Saturday at May Museum