Home > Featured > Critical Mass: Why a Stadium Could Never Build a School
Featured

Critical Mass: Why a Stadium Could Never Build a School

As many Nevadans watched, our legislators went into special session over a football stadium and our governor signed the bill to approve a hotel room tax to build it. Washoe County residents will be voting on a own sales tax increase Nov. 7. The lines easily blur when we think the governor should put that football stadium money into building and repairing our schools. What many residents don’t know is even if he wanted to, he couldn’t.

It’s not that the state doesn’t have the money or couldn’t generate it. Obviously, they have decided they have millions for a football stadium. Right?

Wrong. It’s been repeatedly pointed out in my past articles, how Washoe funds our own capital projects isn’t simple. A series of Nevada Revised Statutes (laws) govern every aspect of our funding, most especially NRS 387.328 which establishes by law that each county funds their own school buildings and repairs. They establish that it is separate from all other funds and budgets.

The state isn’t paying for us.

Per the NRS all counties get their primary funding locally from property taxes. Some counties get more from them based on population, as outlined in the NRS. Some counties have established new laws that apply to them, like Clark, where additional funding comes from other sources such as room taxes or impact fees.

Washoe County does not have such a law, yet. 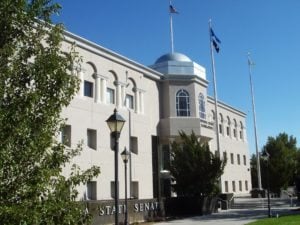 WC1 will establish a law creating a permanent and legal funding source for ONLY Washoe to build and repair schools. Other laws govern other funds like those used to pay teacher and administrator salaries. The same applies to money in the state coffers. The laws don’t let those funds mix. The state has laws governing “state money”. It is hard to keep up with the “red tape” but red tape is born when the public demands more “oversight” of public funds and accountability. Every action has a reaction.

It’s difficult to break it all down in one article or even the 12 this series will complete with. But the basic concept remains: state law dictates the money. In our case and in the simplest explanation, we pay our own way and we do it the way we are told we have to. We can’t use stadium money. We can’t use administrator salary money. We can’t create a new funding source without voting and we can’t vote on it until the legislature says we can.

We generate our own funds, we do it within the rules we have, and we spend it the way we are told.

We can be mad that our state leaders want to spend a ton of money on a football field. We can’t use it as an excuse to hurt ourselves though. We have the chance to take control of our funding situation with the passage of WC1 once and for all. It won’t stop a stadium but it will give us control over our own problems. Let’s not allow the state to take this away from us too.

CORRECTION: This article previously indicated that the special session was for a sales tax increase. The tax was actually a room tax.