By Bob Conrad October 13, 2016
Reno Police said that this photo shows Samuel Harry punching a 17-year-old passenger in the face after the truck accelerated into a crowd. Harry is being charged with battery. 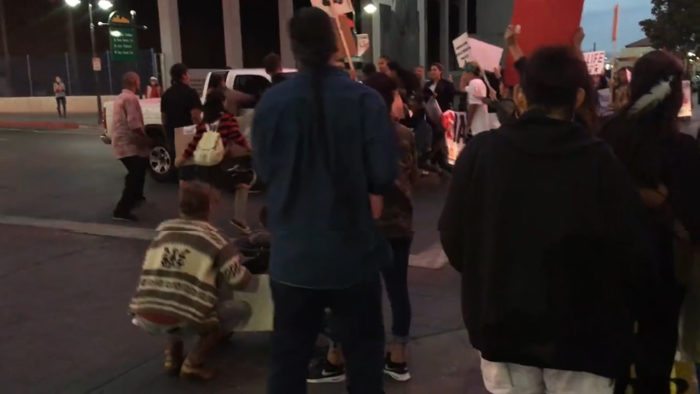 Reno Police said that this photo shows a 17-year-old passenger being punched in the face.

The Reno Police Department (RPD) announced tonight that three men will be charged in the clash that occurred on Oct. 10, 2016, Columbus Day, when a truck rammed through a group of protestors downtown.

Police Chief Jason Soto said that after extensive interviews and watching videos, some of which have not yet been made public, the decision was made to charge two with battery and the truck’s driver with provoking an assault.

“The investigation thus far has identified that some of the aggressive and combative individuals in the demonstrators’ group were not part of the original group who gathered to peacefully protest in the plaza,” he said. “They were individuals who were in the area of the arch who chose to become involved in the incident with the vehicle.” 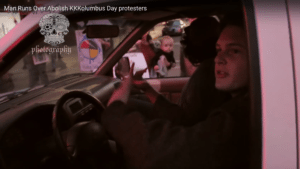 Image: Youtube screen grab from Camera With The Band’s video. Pictured is Nick Mahaffey, 18, and an unidentified 17-year-old.

Soto said that Mahaffey, 18, attended a portion of the peaceful protest at city plaza but then later confronted the crowd when they were blocking Virginia Street under the arch.

“Mr. Mahaffey is recorded as saying expletives, and Mr. Mahaffey does not stop during (an) exchange (before confronting the demonstrators at the arch),” Soto said. “The group of demonstrators from the plaza, and several subjects who joined the march along the way, gathered under the Reno arch for approximately two minutes….

“Although some members of the group expressed to investigators they had intended only to take a photograph under the arch, another participant indicated that the plan was to block Virginia Street under the arch for two hours.

“Mr. Mahaffey approached … in an antagonistic manner, revving his engine and repeatedly honking his horn. Some of this behavior is readily visible on the videos which have been posted on various social media sites.

“Mr. Mahaffey’s vehicle was approached by several individuals. Some of those individuals can be heard telling Mr. Mahaffey to take a different route, while others are heard making threats to remove him from his vehicle and/or to perform acts of violence upon him.”

Soto said there were no recorded statements referencing race or religion, but the FBI is prepared to join the investigation if there is more information showing that a federal civil rights violation occurred.

Fletcher was observed attempting to open Mahaffey’s vehicle and later punching him in the face, Soto said, actions that were corroborated by independent witnesses and demonstrators. After being punched, Mahaffey accelerated forward and his juvenile passenger was punched by Samuel Harry in the face, Soto added.

RPD said that the investigation is ongoing but is being turned over to the city attorney’s office. The three being charged have warrants for their arrest and are being asked to surrender.

Mayor Hillary Schieve said: “I would like to stress that this is still an ongoing investigation and we are devoting all necessary resources available to the swift application of justice.”

Watch a full video below of the press conference.