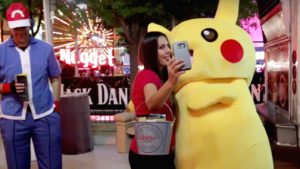 More than 20 stops and 3,000 cups attracted thousands of people last night to play and party in celebration of this Pokemon craze.

For me, this was a very fun evening interacting with the Pokemon Trainers as they gathered downtown for a night of fun. Everyone was friendly and eager to talk about the game.

Outside of the bars, there were thousands more gathered playing Pokemon Go as they do most every night in downtown Reno.

If you don’t know about Pokemon Go, here is a very brief description. This is a game played on a smartphone or tablet that gets people outside to play in a virtual world.  The object is to capture Pokemon or Pocket Monsters, and evolve, raise and train them. You can just collect them or go to places to do battle with them, these places are called gyms.

This is all done in a virtual world that interfaces with the real world around us. This is all based on a series of TV shows, cartoons, trading cards and video games that build the very complex back story.

The kids who grew up watching Pokemon are now of legal drinking age, and with the advent of Pokemon Go they are recharged and perhaps just a bit obsessed with the new mobile game.

In come Heidi and Ed Adkins and their talent for organizing events, especially the crawls that Reno is well known for, and here is the Reno Pokecrawl. From what I saw this was a very well-organized and inspired event that helped to bring a community of gamers together for a night of fun.

Check out the video below.