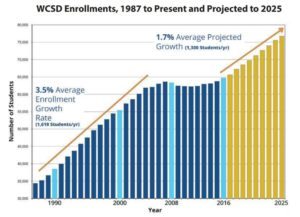 Issues of school crowding, repair needs and expected growth were shared Tuesday with Washoe County school trustees by district communications staff, which has been fielding questions from the public and speaking at meetings on the topic.

Voters will decide Nov. 8 whether to approve Washoe County’s question 1, a half-cent sales tax increase that is expected to raise $781 million during the next nine years to build 15 new schools. Funds would also expand existing schools and refurbish aging schools. Washoe County currently has 93 schools and enrollment is expected to increase 1.7 percent annually through 2025.

The Board of Trustees and the school district cannot take positions publicly on ballot initiatives but can discuss circumstances.

Communications staff has taken part in at least 100 meetings at sites such as schools, service clubs, home owner association meetings and people’s homes.

“Every request we get, we go out and talk to folks,” Payne said. “We respond to every question and every email, and we get a lot.”

“It’s our goal to respond as quickly as possible to everyone who contacts us,” Sutton said. “We’ve done a good job at going out and being available.”

School calendars have been a hot topic with the public.

Once a school’s enrollment is 20 percent over capacity, it triggers year-round schooling. An elementary school continues to operate with staggered break times for four tracks of students. Brown, Double Diamond, Spanish Springs and Westergard elementary schools are projected to go to the multi-track year-round system in fall 2017. Without additional funding, a total of 22 schools will be at or above 20 percent capacity by 2025, according to district projections. An additional 43 schools are forecast to be between 10 and 19 percent above capacity by then. 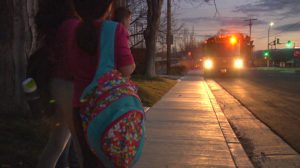 Middle and high schools that reach 20 percent over capacity would go to double sessions. Two separate schools would run out of one building, likely from 5:55 a.m. to 11:55 a.m. and from noon to 6 p.m. This is predicted for several schools in the next five years if the ballot question fails. Sports and extracurricular activities would be affected and it could potentially leave preteens and teens unsupervised several hours before or after school. A failed ballot initiative would also mean that aging schools fall into further disrepair.

Trustee Lisa Ruggerio said thoughts of having children endure such issues are concerning, but she complimented the district’s communications staff on efforts to educate the public.

“It’s so sad we have to spend so much time on this,” Ruggerio said.

A Plan to Repair, Maintain and Build

Passage of question 1 would provide funds to rehabilitate aging schools and allow for the building of new high schools in the Cold Springs, South McCarran and North McCarran areas. Additionally, Damonte Ranch and Sparks high schools would be expanded and Hug High re-purposed. New middle schools would be built in the Sun Valley, Spanish Springs and South Reno areas. New elementary schools would go in the South Meadows, Spanish Springs or North Valleys and seven other areas dictated by growth.

If approved, an appointed citizen oversight committee must authorize all new capital projects and another independent group must certify that debt is only being issued to build or repair schools. All meetings would be open to the public. This money cannot be used for teachers, school administrators or other school operations.