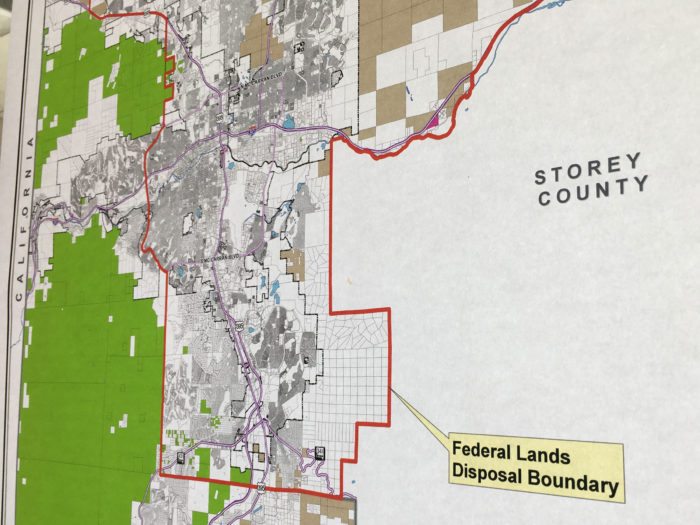 A federal lands bill could mean Washoe County will acquire federal land, but some who could be impacted by the changes have questions.

The legislation is called the “Economic Development and Conservation Act.” A draft of the bill is not yet public, but two recent open house meetings held by Washoe County drew dozens to learn more about the federal bill.

County planning director Bill Whitney said the bill is 15 years in the making.

“The federal lands bill comes in two pieces,” he explained. “There’s the economic development portion and there’s the wilderness part of it. There’s new wilderness areas being proposed in northern Washoe County.”

Representatives from non-governmental organizations, the county, city and Sparks are meeting to discuss potential concerns about the bill such as how economic development is defined or how cattle grazing rights may be impacted in northern Washoe County.

Doug Busselman of the Nevada Farm Bureau said: “Our main concern is making sure that while livestock grazing is permitted in wilderness under the wilderness designation but there’s necessary infrastructure, access roads and things like that that need to be factored in and written into the language….”

If Washoe County gains land previously designated as public and managed by the Bureau of Land Management, how will it be used? That’s a question that the county’s Whitney said should be addressed as part of the process to develop the bill.

New land gained by the county could be developed, used for recreation or kept as public land.

Shevawn Von Tobel of Friends of Nevada Wilderness said the bill should strive for a balance among uses.

“The goal is to strike a good balance between conservation, development and preserving our great outdoor recreation that we have here in the county,” she said.

Whitney stressed that the lands bill is still being developed and getting public feedback is the start of the process.

CORRECTION: This article was edited to correct an error that said that Washoe County’s boundaries would change. The county would gain new public land already within the county’s boundaries.