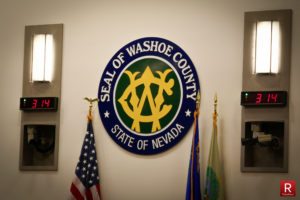 The Washoe Board of County Commissioners approved today three people to serve at the Nevada Legislature for an upcoming special session.

Commissioners named Jesse Haw and Julia Ratti for state senate and Dominic Brunetti for the assembly.

The term of the appointments is just for the special session. The lawmaking body is slated meet in October to consider approval of a stadium in Las Vegas for the Raiders football team.

The Las Vegas Review-Journal reported that the Nevada Taxpayers Association is opposed to the stadium, citing uncertainties in the deal and data that show that subsidized stadiums can be detrimental to communities. Others see the stadium as enhancing economic development.