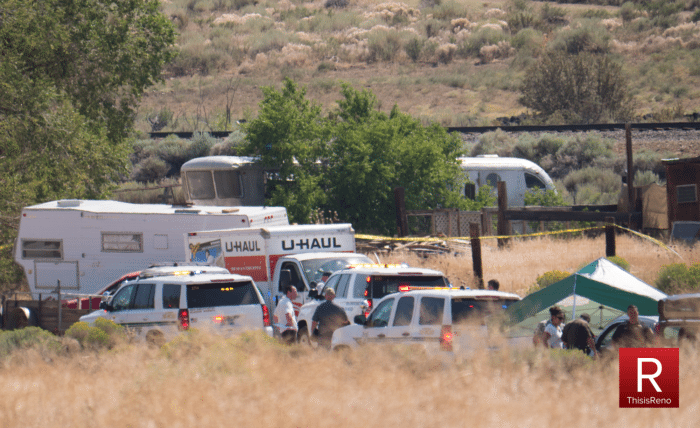 At about 12:20 pm on Friday, August 19, 2016, Deputies with the Washoe County Sheriff’s Office and Troopers with the Nevada Highway Patrol attempted to stop a U Haul cargo van, occupied by two males, near I80 and the USA Parkway.  The vehicle continued to elude law enforcement as it went from I80 westbound to northbound I580 towards Stead.

The vehicle exited I580 near Stead and led law enforcement onto a dirt road on the west side of North Virginia Street where Officers attempted to block the vehicle.

At some point shots were fired and the male driver of the vehicle was declared deceased on scene.  A Washoe County Sheriff’s Deputy was transported to a local hospital with non-life threatening injuries sustained during this incident.

The driver has been identified as 29 year old Reno resident Kyle Zimbelman.

As part of the Washoe County Officer Involved Shooting (OIS) protocol, Reno Police Robbery Homicide Detectives responded to the scene and will be the lead agency in this investigation with the assistance of Detectives from the Sparks Police Department.

An attempted traffic stop on I-80 this afternoon lead to one man being shot dead and a Washoe County Sheriff’s deputy in the hospital with non-life-threatening injuries.

Reno Police Department spokesman Tim Broadway said that Nevada Highway Patrol Troopers attempted to pull over a cargo van on I-80 near the Patrick on-ramp, but the driver refused to stop. A pursuit followed into a mobile home park near Stead Boulevard and North Virginia Street.

Gunshots were fired, and the driver of the vehicle is dead, Broadway said. A passenger was detained and is being questioned. A deputy was injured in the incident. It is unknown if the driver or passenger were residents of the trailer park.

A Washoe County deputy district attorney was on scene in accordance with protocol. Broadway said that more details would be released in the coming days.

Watch the video for more information.