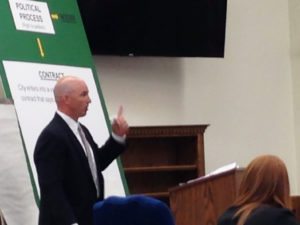 An antitrust lawsuit alleging Waste Management conspired with another trash hauler to acquire it and monopolize the Reno market was dismissed Thursday by District Court Judge Patrick Flanagan.

The case, filed in Second Judicial Court in March 2015, claims Waste Management mislead the city of Reno into approving a franchise agreement. Nevada Recycling & Salvage and Rubbish Runners alleged they were being squeezed out of the market and sought to recover loses.

Plaintiff attorneys said Waste Management and Castaway Trash Hauling conspired to merge and form a monopoly months before the Reno City Council approved an agreement in late 2012 with both entities.

“This court can find no evidence to support that characterization,” Flanagan said after hearing attorney arguments.

Waste Management’s acquisition of Castaway was finalized less than a year later. Some then-city staff and council members were reportedly unaware of the planned takeover when the contract was voted on.

Mark Simons, representing Waste Management, said the contract between the city and his client is valid, unambiguous and enforceable. Reno held meetings as early as 2007 when it wanted to expand its recycling program and neither of the plaintiffs made efforts to get contracts then or in following years, he said.

Simons said the city didn’t dispute Waste Management acquiring Castaway and that this case sounds like an “I want something someone else has, and I’ll say and do anything to get it” situation.

“But now, because of human nature, they want hundreds of millions of dollars,” Simons said. “You don’t go to a jury with that, in my opinion.”

Also, Simons said the lobbying process is exempt from antitrust laws because the political system governs itself.

“This has nothing to do with the political process,” said Stephanie Rice, representing Nevada Recycling & Salvage and Rubbish Runners. “Castaway and Waste Management used the political process several months later. Clearly, the city wasn’t in the loop on this agreement.”

Rice said the defendants violated the Nevada Revised Statutes that address unfair trade practices. Nevada Recycling and Rubbish Runners did speak to city officials about not getting a fair opportunity to compete for a contract, she said.

“Could your client have performed under terms of agreement as a qualified contractor?” Flanagan asked.

“We don’t know because there were no qualifications in place as stated in the franchise agreement,” Rice said. “They weren’t at the table until after two (trash hauling) zones were already established.”

“They jointly conspired to orchestrate a buyout,” Rice said.

Simons said Nevada Recycling and Rubbish Runners were okay with not getting a zone 4 years ago because they were classified as “small haulers” and couldn’t have done the work.