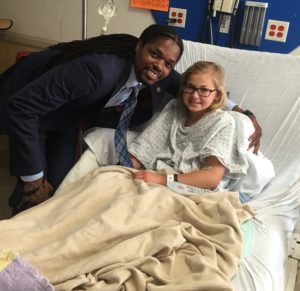 Landau Murphy with a patient at the Renown Children’s Hospital.

Smooth melodies glided through the halls in the Tahoe Tower of the Renown Children’s Hospital on Monday as Landau Eugene Murphy, the season six winner of America’s Got Talent, visited the children being treated in the hospital.

Murphy, who was the closing performer for Artown the night before, chatted with patients and crooned easy listening classics such as Sinatra’s “Fly Me to the Moon.” Before the visit, members of the ‘Talent’ winner’s band bought stuffed bears from the gift shop to give to each child whom Murphy was able to see. As the singer took photos and joked with the families, smiled beamed and giggles bounced off the walls of rooms where laughter can too often be hard to come by. “This was the happiest I’ve seen [my daughter] in a long time,” one patient’s mother said.

“Kids just want to be kids, and they want to play, and they want to be who they are,” Renown Children’s Hospital Administrator Lawrence Duncan said. He added that “When they’re in a hospital…they’re limited in what they can do. The more activities we can bring in…especially people who want to be here and are excited to entertain them, it just makes their day that much better and it takes their mind off of what they’re going through.”

When it came to spending time with the children at the hospital, Murphy was more than happy to oblige. The singer is no stranger to hardship in his life, moving from poor areas of West Virginia to gang-heavy neighborhoods of Detroit as a child, and even facing homelessness at one point as an adult. During his visits, he shared stories of his own struggles growing up and how music helped him to push past them. Mainly, he wants to take the joy that music gives him and spread it to others who need it just as much as he once did.

“The blessing is what it’s all about.” Murphy said, explaining that “[When I] receive a blessing…[I] always want to be able to pay that forward…I mean you can see the smiles on these kids’ faces.” As somebody who feels as though he has been given a gift, Murphy believes that he has a responsibility to do what he can to make the world a better place. “In my eyes, I have to spend time with them, because that’s the reason I was blessed…I don’t want to be selfish with it…I want to rest my head knowing that [a] kid’s day is brighter,” he said.

The word “hope” is framed on a wall outside of the children’s ward, during his visit to the Renown Children’s Hospital, Landau Murphy brought a little more of it. 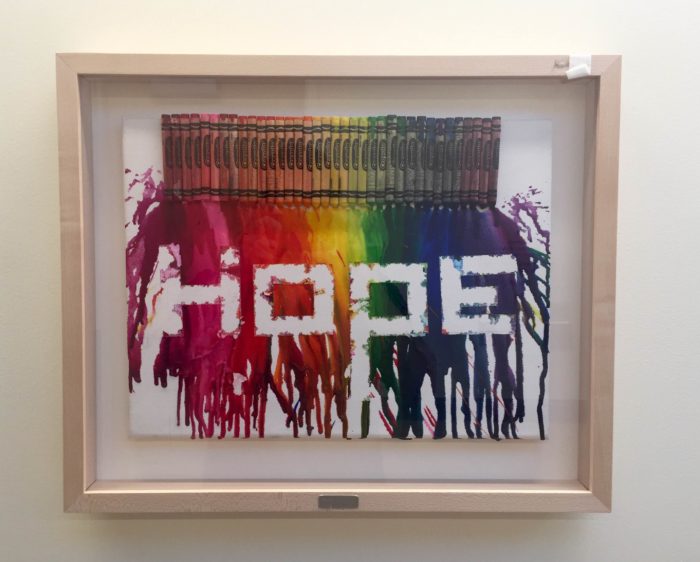 Luke Keck is originally from the Bay Area in California and has been living in Reno for over three years.  He is currently a senior at the University of Nevada and will be graduating with bachelor’s degrees in both journalism and English writing.  When not working or in school, he can be found watching Netflix, keeping up with the news, or reading

Renown to re-deploy temporary medical structure in anticipation of new...

PODCAST: Transparency takes a hit during the COVID-19 pandemic