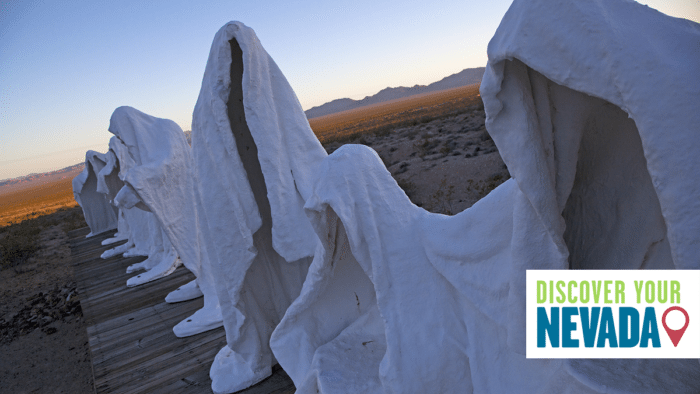 Calling all art and nature lovers. Venture from Goldwell Open Air Museum, chalked with uncommon statues, to a beautiful state park to picnic or hike in. Ranked among some of world’s most unique places to experience art is the one-of-a-kind Goldwell Open Air Museum located in central Nevada features seven colossal sculptures, including a ghostly life-size version of Leonardo Da Vinci’s painting of the Last Supper. Additionally you’ll find a 25-foot pink woman constructed from cinder blocks, a 24-foot steel prospector and penguin, a gleaming tangle of chrome car accessories, and a finely-carved winged woman who reaches for the sun from her perch atop a wooden pillar.

The sculpture park covers nearly eight acres. It was created by a group of well-known Belgian artists, led by the late Albert Szukalski, who were drawn to the remote upper portion of the vast Mojave Desert to pursue artistic vision free from convention. One bit of information to note, is that each piece on the property was designed within the context of the landscape. The park is open to the public all day, every day, and there is no admission fee.

The Goldwell Museum also features an on-site visitor center, seasonal events, and a gift shop. The center is open certain weekends during the summer, but visitors can explore the sculpture park anytime.

Whether you’re an art connoisseur, or just looking for something uncommon to witness, you’ll find intrigue and perspective at the Goldwell Open Air Museum. 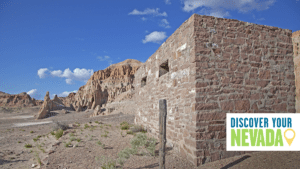 After admiring the bizarre and beautiful, who wouldn’t love a picnic in the park? Or maybe just a long stroll through large canyons with the Nevada sky as your backdrop? Cathedral State Park in Lincoln County about 2.5 hours outside of Las Vegas is known for its dramatic, carved cliffs. The space was designated a State Park in 1924 and became official in 1935 with the help of the Civilian Conservation Corps.

Since, parkgoers have enjoyed picnicking facilities while soaking in the buff-colored cliffs and stunning view. The view is a result of millions of years of geologic activity. Originally, volcanic activity occurred throughout this region, dispersing layers of ash hundreds of feet deep throughout the area.

The source of the ash, the Caliente Caldera Complex, lies south of the modern day park boundaries. After these violent eruptions ceased, a fracture in the bedrock occurred, allowing the two sides on either side of this fault to move. This faulting formed what is now known as Meadow Valley. Over time, Meadow Valley filled with water, resulting in a freshwater lake. Over centuries, the lake began to gradually drain and the erosion process continued to occur, exposing ash and pumice left behind from former volcanic activity. Today, you will see  formations that occurred as a result of the lake drying up. Occasionally as rain storms pass throughout the region, the canyon’s walls, made of Bentonite clay, will become very soft and even impressionable. Footprints can even be found throughout the canyon floor.

What are you waiting for? Head to Cathedral Gorge to camp, picnic, hike, study nature, or to capture mesmerizing photos. Be on the lookout for black-tailed jackrabbits, cottontail rabbits, packrats, kangaroo rats, mice and gophers. Other nocturnal animals, including mule deer, coyotes and kit foxes are know to roam the area in the evening and early morning hours as well.

Be sure to “check-in” on Facebook, Instagram, or Twitter between Memorial Day and Labor Day. For every check-in that uses #DiscoverNV16, TravelNevada will donate $1 toward a Field Trip Fund that sends one deserving Nevada student on a Silver State field trip of a lifetime.

Visit Tonopah, Lamoille Canyon and other sites through Travel Nevada’s...