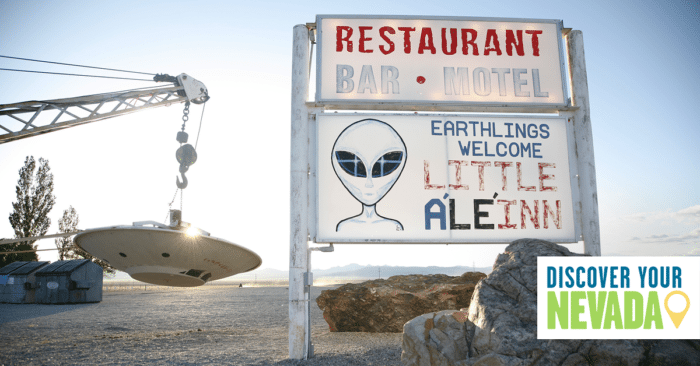 Exploring a historic opera house on your way to explore the beyond at Little A’le’inn is the perfect summer trip. From Eureka to Rachel, you’ll see parts of Nevada you may not have before. Many consider the Eureka Opera House a prime example of the American West. Nestled atop a hill on Main Street, the opera house is a must-see art venue.

After a fire ripped through the Odd Fellows Hall, the Eureka community decided they needed some culture and erected their very first-and seemingly last-opera house. The official grand opening, a New Year’s Eve gala masquerade ball held in 1880, was just days later in January 1881, where they toned it down with the showing of silent film drama, “Forget Me Not.”

Throughout the years a series of regular live performances and events were held, including plays, masquerade balls, dances, operas, concerts and social events. Motion pictures were shown starting in 1915, and the Opera House was renamed Eureka Theater, lasting up until the 1958 when the movie house was closed.

It remained vacant for over 30 years until its renovation in 1993. Today, the Eureka Opera House welcomes visitors, is a stop on the Loneliest Road Survival Guide, and serves as the Cultural Arts Center of Eureka.

After stopping through Eureka, you can motor through the Extraterrestrial Highway stretching from Tonopah to Hiko. You’re sure to run into Rachel’s Little A’Le’Inn. Family owned and operated for over 25 years, Little A’Le’Inn is a central Nevada landmark.

The inn offers a bar/lounge, high-speed internet, fuel, an on-site restaurant, and is pet friendly. Whether you’re just stopping through or Rachel, Nev. is your ending location, , it’s a destination you won’t forget.

Be sure to “check-in” on Facebook, Instagram, or Twitter between Memorial Day and Labor Day. For every check-in that uses #DiscoverNV16, TravelNevada will donate $1 toward a Field Trip Fund that sends one deserving Nevada student on a Silver State field trip of a lifetime.