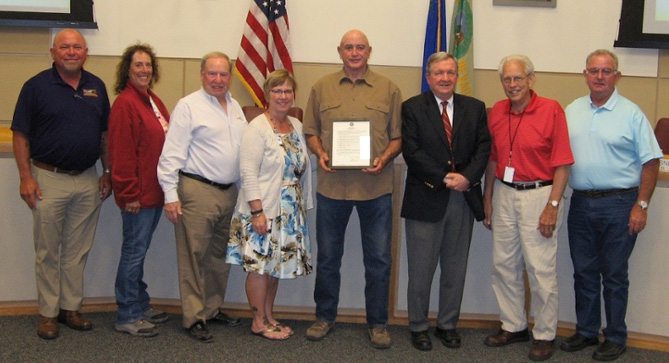 Washoe County is taking steps to remove one of its planning commission members.

County Manager John Slaughter said the opinion article, and failure to recuse himself from a subsequent meeting, was just cause to remove Daly as a commission member.

“To ensure there was absolutely no lack of clarity on the advice being given to you about your need to recuse yourself, legal counsel …stated into the record … the unequivocal opinion that you were disqualified from legally participating, that you should recuse yourself, and that you should leave the meeting room for the duration of the hearing to avoid exerting any further influence in the matter.”

The Board of County Commissioners was scheduled to consider Daly’s dismissal today, but an attorney, Courtney Forster, representing Daly, asked for a delay in order to present a defense. She said Daly would not be available for the next two commission meetings.

That request miffed commissioners who noted that Daly had been given more than required notice about today’s commission agenda.

“I feel that the chair makes a very valid point that we are prolonging an issue well beyond what we should,” he said.

A request for comment was emailed to Daly, and a phone message was left for Forster requesting comment. In county meeting minutes, he is cited as participating in the May 3 hearing for the development.

Commissioner Daly said that the night’s presentation was materially different from what they heard on April fifteenth, what he heard on March fourteenth, and what he read in the additional application. He thought that what they heard was an improvement. He said that he was taking a fresh look at this, objectively, passionately, because he had new information; new conditions, changed conditions, a new traffic study, an NDOT review of the new traffic study, a potential Truckee Meadows Fire standard of cover study, which evaluates their capabilities to respond to growth. Most of this he had received within the last hour. He said that he was not prepared to vote one way or the other, because the amount of information they had received that evening, he could not evaluate in 60 minutes.”

He voted against project subdivision maps at the meeting, according to the meeting minutes.

The fires occurred in Red Rock Rancho Haven, Palomino Valley, Fish Springs, north of Gerlach and Pyramid Lake. Voluntary evacuations were called for and places for shelter opened as firefighters battled high winds, fire and heavy smoke. Additionally, the Jackpot Fire burned about 1,700 acres in the Silver Knolls area on August 6. Firefighters are mopping up the burned areas and remain on alert as preliminary disaster assessment teams are determining actions needed to stabilize the burned areas from these seven wild land fires.

“Due to the high volume of wild land fires this summer and the expectation that our area will remain extremely dry moving forward, I decided to declare this State of Emergency for the northern areas of Washoe County,” Slaughter said. “Declaring this State of Emergency does not mean our county or citizens are in any immediate danger, but it does allow our Public Safety responders to more quickly access additional resources that may be needed from outside of Washoe County to respond in case of a high scale fire emergency. The State of Emergency will remain in place at least through next weekend when the region is expected to experience extreme temperatures.”

Washoe County Code 65.320 allows the County Manager to declare a state of emergency when any man-made or natural event or circumstance is causing or threatening loss of life, injury to person or property, human suffering or financial loss to the extent that extraordinary measures must be taken to protect the public health, safety and welfare.

County Commissioners also approved a ratification of a license agreement with the University of Nevada, Reno (UNR) for livestock sheltering. The agreement provides the UNR Valley Equestrian Facility as a temporary shelter residents can take their animals during an evacuation.

“When neighborhoods are threatened by wild land fire and other disasters, we must make provisions to provide shelters for residents, their small pets, and safe refuge for livestock,” Washoe County Emergency Manager Aaron Kenneston said. “We are grateful to UNR for agreeing to provide temporary sheltering for livestock upon request of County Officials during times when the Livestock Event Center is not available.”

“It is our duty to oversee the use of this land and future use of this land for economic development and other purposes,” said Washoe County Commissioner Bob Lucey (Dist. 4). “I am happy with the boundary lines in these maps that have been proposed by staff. Thank you to our Washington D. C. Delegation and County staff for working so diligently on this. The delegation has assured us that they are going to fast-track this so land can be transferred in time to meet demand.”

At the Feb. 16, 2016, Board of County Commissioners meeting, Commissioners adopted a Resolution of Support of comprehensive Federal Public Lands Bill.

The Federal Public Lands Bill will make the following a priority:

Seniors Services teams up with Catholic Charities of Northern Nevada offer more than 1,100 seniors free, nutritious meals every day. Many of those meals are delivered to seniors at home through the Meals on Wheels program.

“We are appreciative and extremely grateful for our community partners, like Catholic Charities, that have teamed up with us on this very critical service need in our community,” Director of Social Services Amber Howell said. “Providing nutritional services and meals to our seniors is a top priority for Washoe County and we are excited to begin our second year collaborating on this vital service for our seniors.”

“The Justice Court is pleased to accept the Violence Against Women Grant awarded by the Nevada Attorney General’s Office which will enable the Court to provide better monitoring on these important cases by having a Domestic Violence Compliance Monitor, Justice of The Peace Patricia Lynch,” said Court Administrator Dexter Thomas.