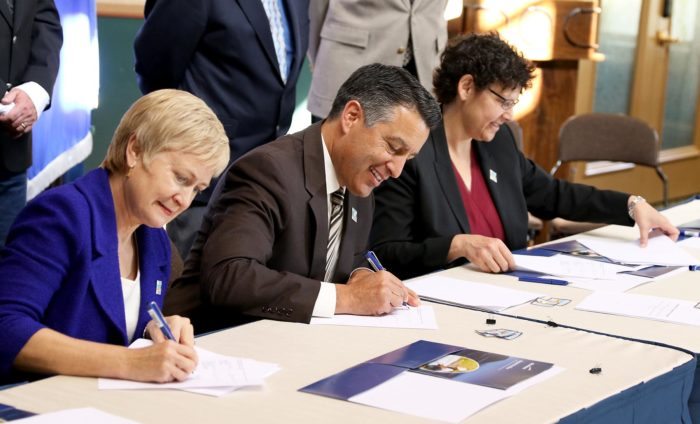 The habitat is under Newmont’s management, and the company said that it will begin improvements on the land, along with BLM-managed lands.

“Through this historic agreement, Newmont has committed to implementing a wide-ranging, landscape-level conservation plan that includes voluntarily managing certain areas of its private rangelands and ranches in Nevada to achieve net conservation gains for sagebrush species,” said Nevada Gov. Brian Sandoval. “This good-faith, public-private partnership represents a significant and meaningful achievement in the cause of sagebrush habitat and species protection in the western United States.”

The agreement allows the state to work with federal agencies and Newmont to implement a conservation credit system (CCS), which Newmont can use for habitat conservation projects to offset impacts from mining activities.

“Newmont looks forward to embracing this historic opportunity and building upon our 50 years of responsible mining and environmental stewardship in Nevada,” said Dr. Elaine Dorward-King, Newmont’s executive vice president for sustainability and external relations. “We appreciate the good-faith demonstrated by all the parties involved to achieve this historic agreement which will advance sagebrush habitat management in Nevada while supporting continued sustainable mining practices over the long term.”

“Along with a majority of Nevada counties, my office has been pushing back against the federal government’s overreaching sage-grouse land plan for almost a year,” Laxalt said. “As our latest brief again demonstrates, the Bureau of Land Management’s rushed, one-size-fits-all sage-grouse plan not only violates multiple federal laws, but also the agency’s own regulations. The BLM blatantly disregarded the many Nevada experts and stakeholders, and failed to consider how its plan would impact Nevadans.”

ThisisReno filed a public records request regarding sage grouse in March with the Governor’s Office. The request remains mostly unfilled despite repeated requests and sending to Joe Reynolds, the governor’s legal counsel, nearly $200 for the records.

Reynolds said the office is understaffed and that the records request, amounting to 288 pages, is larger than most. He added today that the records will be sent next week. He has threatened to redact the records, citing attorney-client privilege and “pre-litigation.”

Gov. Sandoval’s spokeswoman, Mari St. Martin, said that Sandoval has not ruled out joining in on litigation, even though Sandoval criticized Laxalt last year for joining the suit, saying the Attorney General did not represent the state of Nevada.

Barry Smith with the Nevada Press Association said “pre-litigation” is not a legal reason to redact public records.

“As far as I know, there’s no such thing as an exemption for ‘pre-litigation,'” he said. “They need to cite a statute that would allow them to redact. I don’t think they can.”