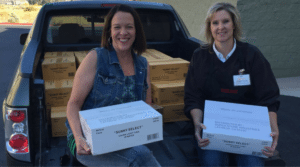 Honoring Hunger Action Month, the annual Run on Tuna benefiting Food Bank of Northern Nevada is Sept. 1 through Sept. 30. This year’s goal is to collect over 10,000 cans of tuna.

Both individuals and businesses can participate. Local organizations and businesses such as Chase International, Lyon and Lamb School, OHL Contract Logistics and PK Electrical have had their own ”Run on Tuna” drives in the past, making significant contributions to the overall efforts.

“Once again, we are so excited about this year’s Run on Tuna,” said Joceyln Lantrip, marketing director for the Food Bank of Northern Nevada. “Every year we are amazed at the size of the donation and with a goal of over 10,000 cans, we are already thrilled! The number of our neighbors in need in our community is still so very high and with over 95,000 people being served each month, a donation of protein like this is so valuable for these families.”

“Last year’s Run on Tuna collected 15,063 cans of tuna with the help of many people in our community,” said De De Rosene, founder of Run on Tuna, “so we anticipate exceeding our goal again this year. We would not be able to reach the number of cans collected without the help of Michelle Sturge and Chase International. Michelle’s efforts have earned her the title of Tuna Princess.”

Cash donations can also be made via PayPal through the Run on Tuna Facebook Page.

Greater Nevada donates over $17K to Food Bank of Northern...