$140,000 Raised at Save Our Schools Fundraiser Last Week 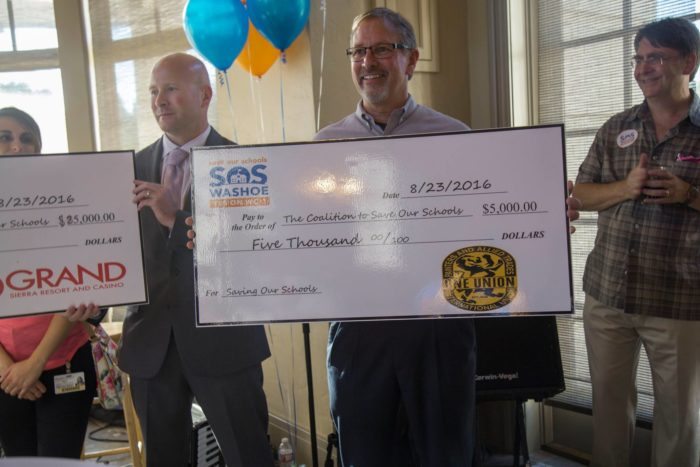 Last week, Reno Land, Inc. along with Western Nevada Supply, Q&D Construction, and SOS Washoe hosted a back-to-school fundraiser at Rancharrah Mansion. Throughout the fundraiser, $140,000 was raised with all proceeds going towards The Coalition to Save Our Schools, a citizen-led effort to pass Washoe County Question 1 (WC-1).

Although Chip Bowlby, managing partner at Reno Land, Inc. has already donated $100,000 to the campaign, he pledged to match every donation made at the event.  The fundraiser raised $70,700, which Bowlby matched bringing the grand total to $141,400. Western Nevada Supply and Q&D Construction have both donated $15,000 each to the cause.

Continuing his efforts, Bowlby has challenged the community to help raise the money needed for the campaign. If the community raises $1.3 million, Bowlby will give an additional $50,000.

“This contribution is going to further this important cause,” said Bowlby. “Passing WC-1 will build fifteen new schools and make critically needed repairs to existing ones. Investing in the Coalition to Save Our Schools is a long-term investment in our kids, community and in our economy.”

For details on Coalition to Save Our Schools, visit www.SOSWashoe.com.

The Village at Rancharrah kicking off holidays with tree lighting...

New shops and restaurants announced at The Village at Rancharrah...

Tolles Development Company hosts Holiday Pop Up at The Village...