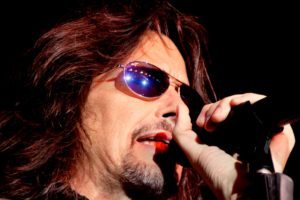 Known as your Juke Box Heroes, international band Foreigner came to rock Silver Legacy’s Grande Exposition Hall on July 2nd. They heated up the already hot night by performing their biggest hits: “Cold as ice,” Hot Blooded,” “Long Long Way From Home” and more with a special acoustic rendition of song written by bassist Jeff Pilson “Say You Will.”

Fans got the ultimate treat but were able to interact with the band near the end of the concert where we were allowed to go up in front of the stage for the remainder of the show. Foreigner formed by Mick Jones, Ian McDonald and Lou Gramm (former vocalist) but are now made up of Kelly Hansen (lead vocals) , Jeff Pilson (bass), Tom Gimbel, Mike Bluestein (keyboards), Brian Watson (guitar) and Chris Frazier (drums).

Mick Jones re-joins the band on select concert dates but in Reno he was missed.

I personally met a lot of loving dedicated Foreigner fans who wanted pictures and even some Foreigner fans in the making with a father bringing his daughter for her first live concert.

This tour of 2016 through 2017 marks the band’s 40th anniversary of being a top selling artists from the 80s. All of us in the building did feel those “Dirty White Boy(s)” make us ladies “Hot Blooded.”

Thank you to the Reno High School Choir for fundraising for the Grammy Foundation and joining Foreigner for their song “I Want To Know What Love Is.”

Employees from Eldorado, Silver Legacy, and Circus Circus Register as...

Share love of food and more at Silver Legacy this...