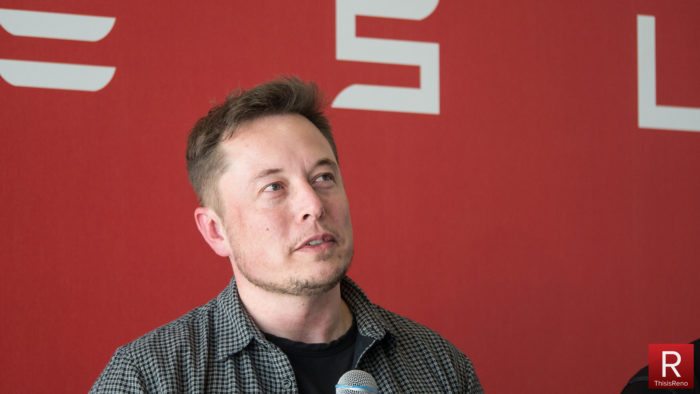 Elon Musk is philosophical about his business. At this week’s press event at the Tesla Gigafactory east of Reno, Musk described the factory as a “machine that builds the machine.”

“The factory itself we consider to be a product,” he said yesterday. “It actually deserves more attention from creative, problem-solving engineers than the product that it makes. A … majority of our engineering effort will go into designing the factory as a product.”

In other words, factory efficiency will inherently lead to product improvements. 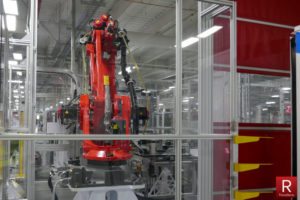 Musk spoke openly about economics, engineering challenges and mentioned a recent favorite book. (Twelve Against The Gods: A Story of Adventure by William Bolitho and R.J. Gurney — “It’s really quite good,” he said.)

The press event allowed select reporters from across the country and local media on a tour of the factory, which is only about 14 percent of its projected size, in advance of a private customer event scheduled for Friday.

The factory is ramping up production ahead of projections. It is designed to streamline domestic battery production to be shipped from Reno to Fremont, Calif. rather than importing the batteries from overseas. Musk said that the factory is gearing up for about three times the production than originally anticipated.

“We need to get to roughly a third the size of the original building in order to support half a million cars a year (by 2018),” he said. The original date was 2020 — hence, the ramp-up of construction.

Musk wants to transform transportation and energy infrastructure, a tall order in a country that relies on automobile-based traffic.

Rather than remedy infrastructure design that brings convenience at the expense of environmental impacts, Musk wants to change the system from the ground up with the units that support it in order to tackle one aspect of energy consumption with negative externalities: fossil fuels. 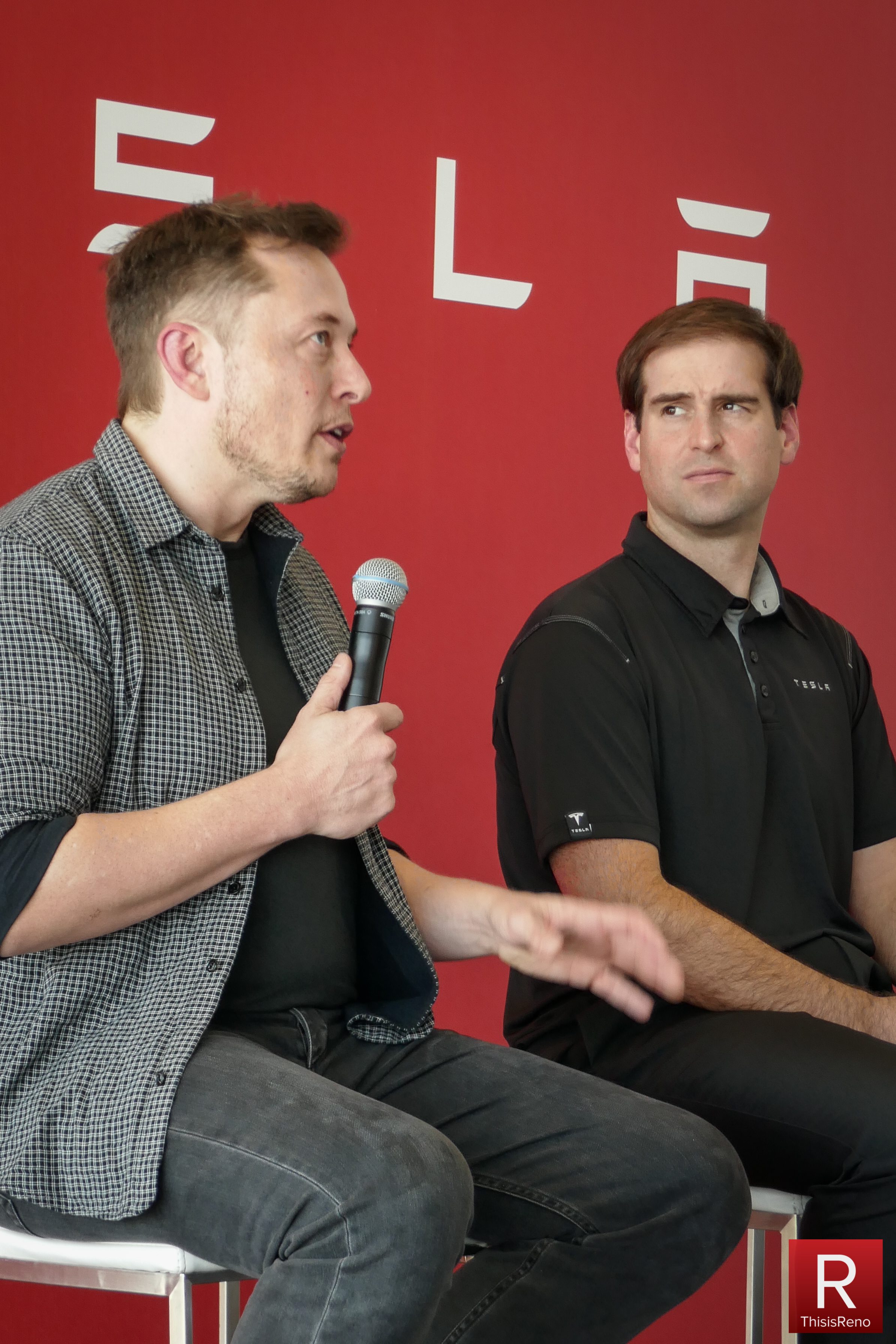 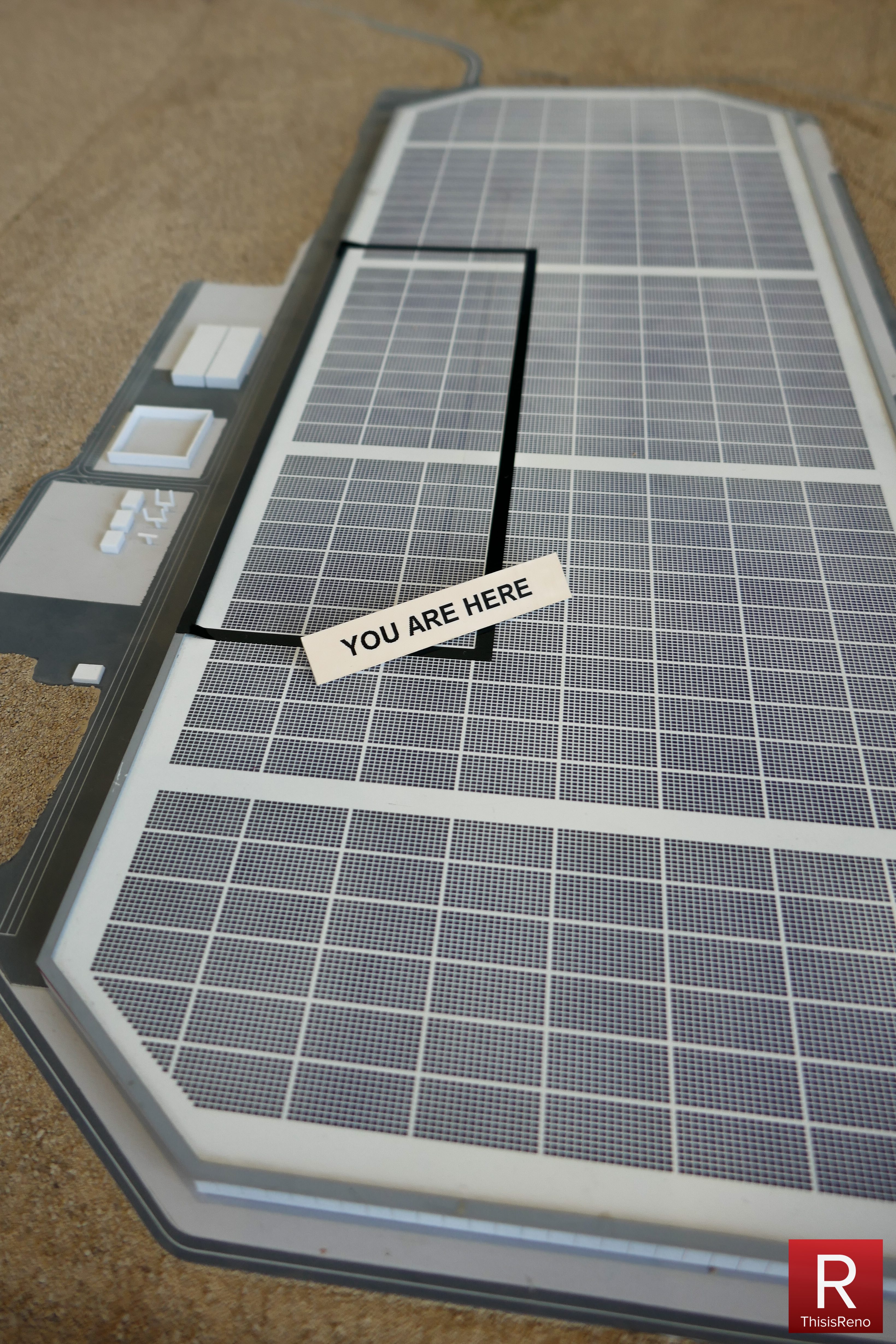 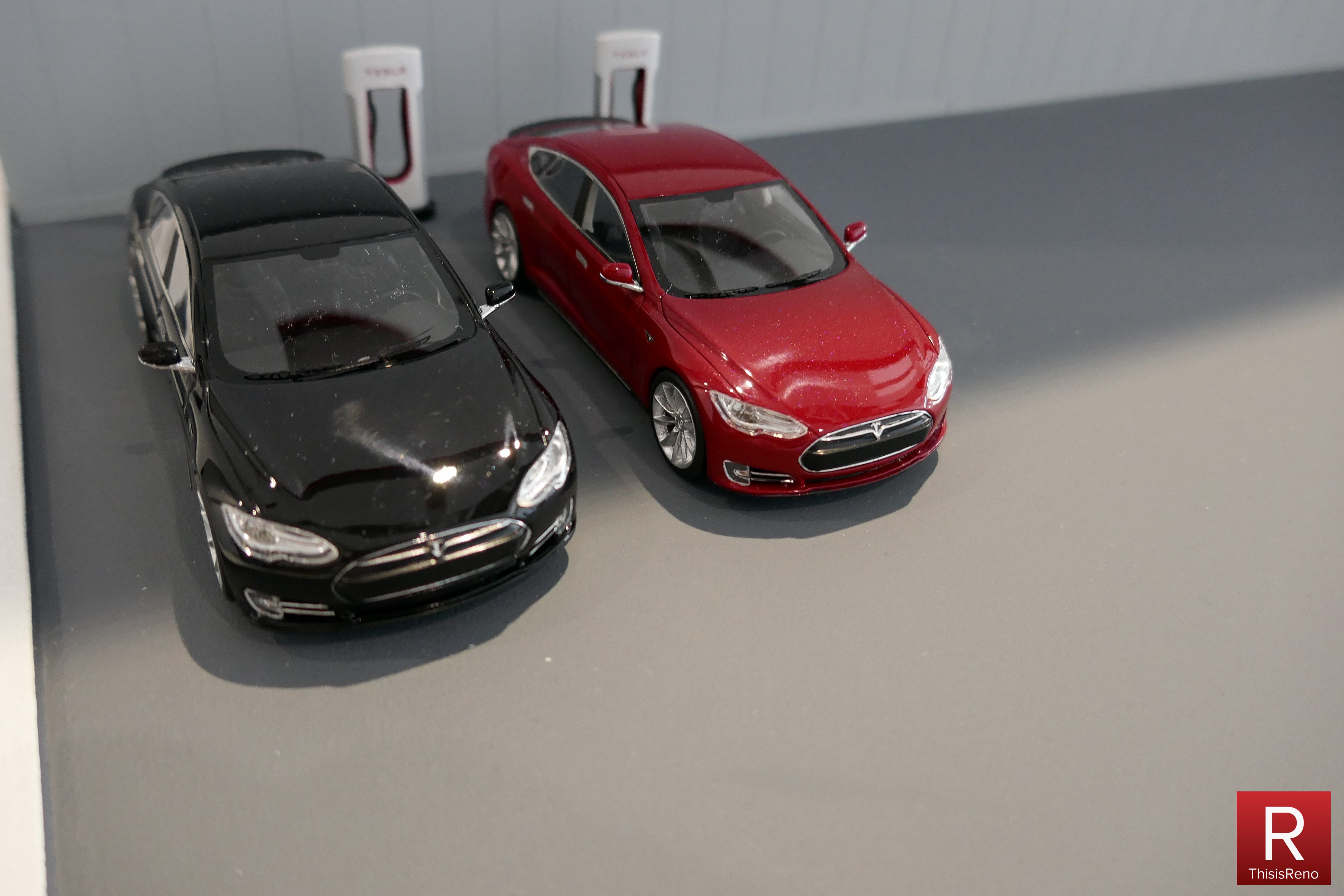 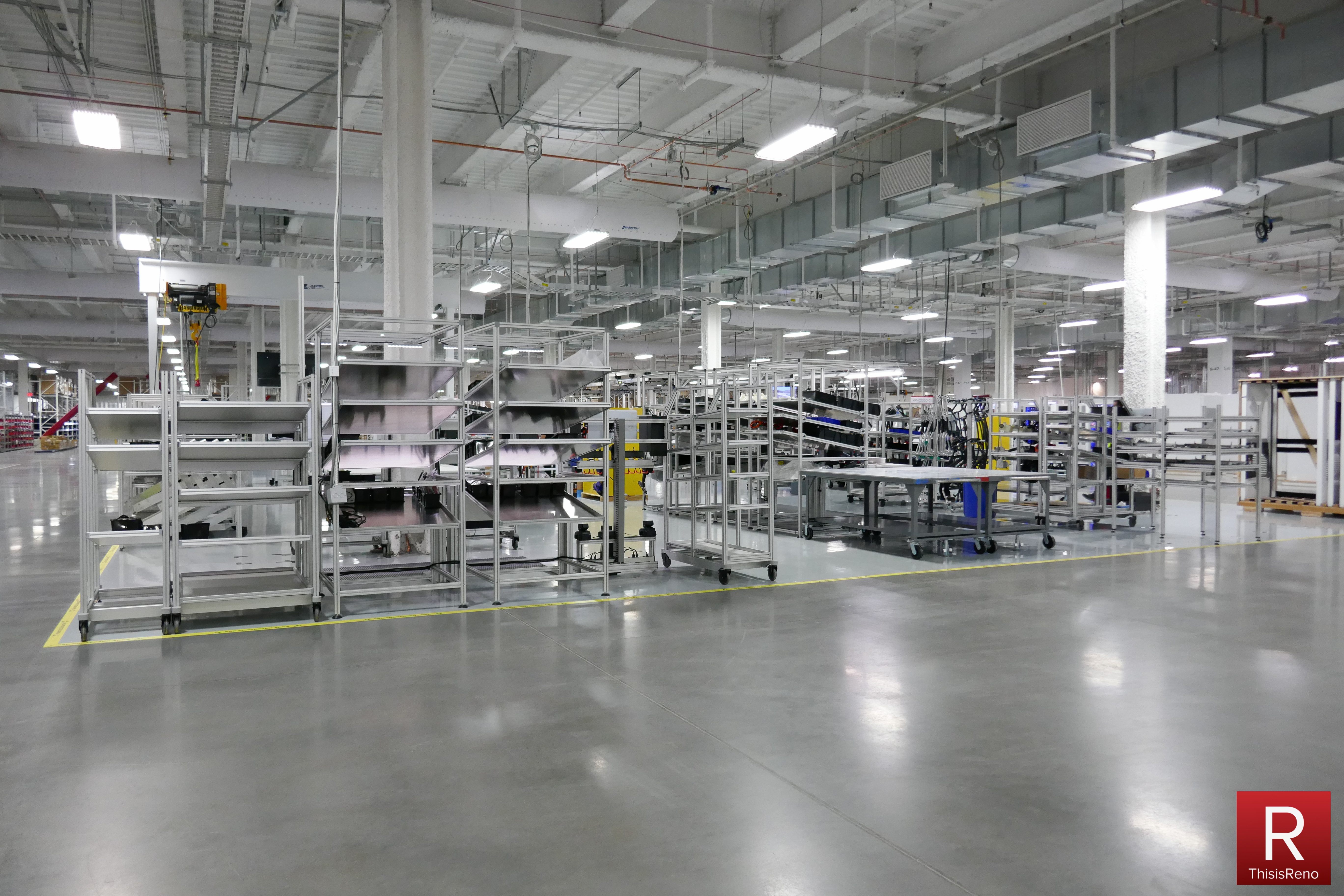 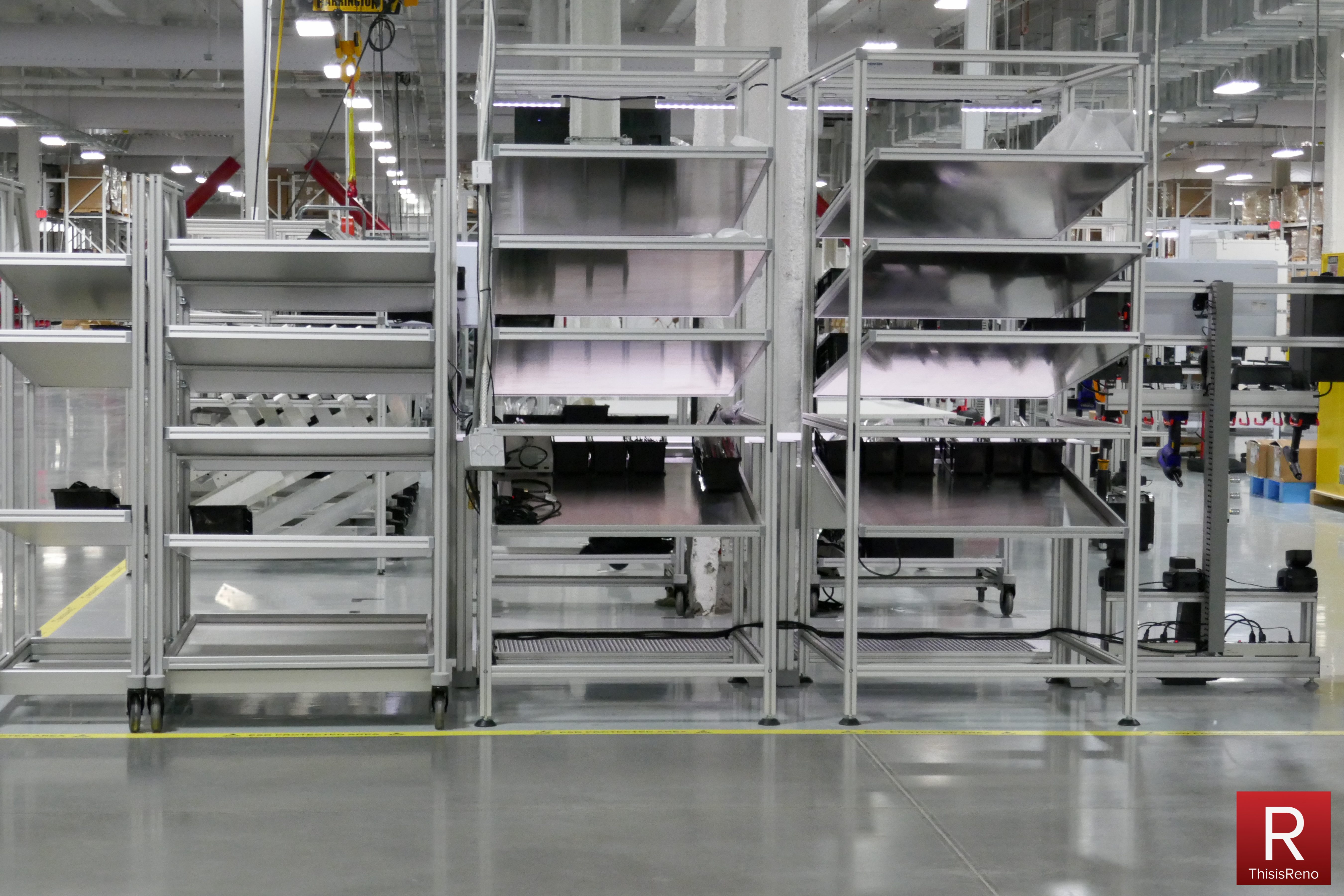 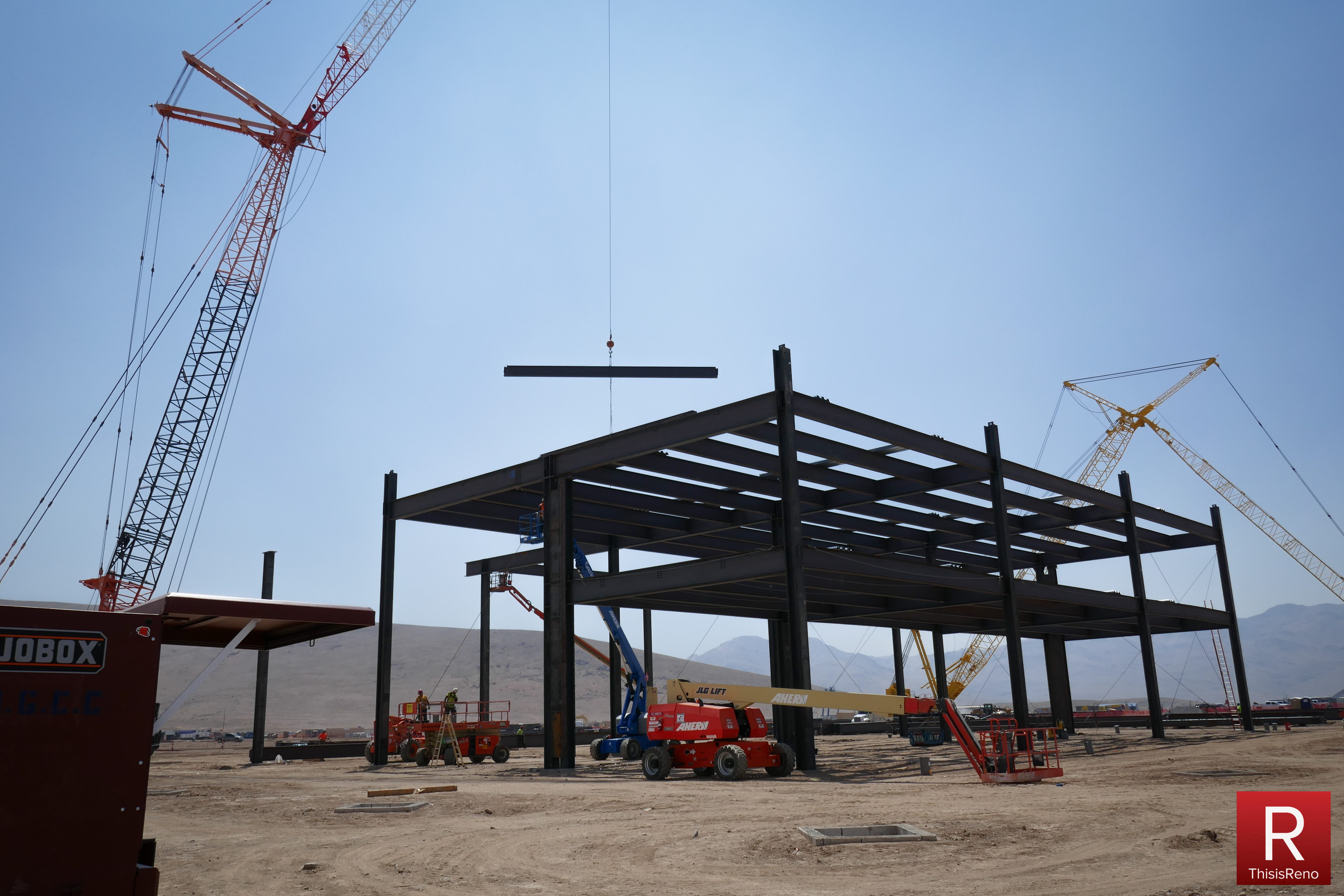 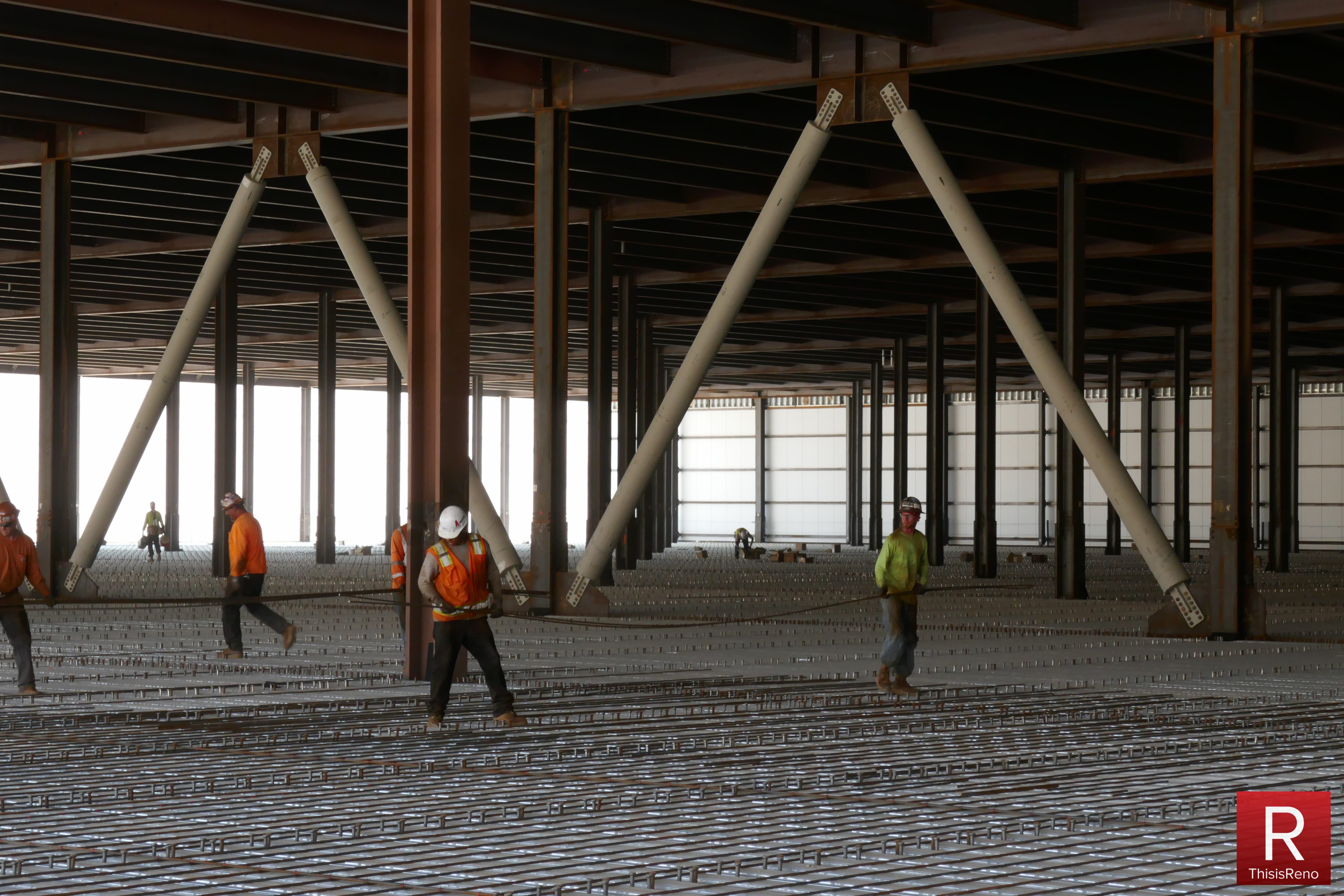 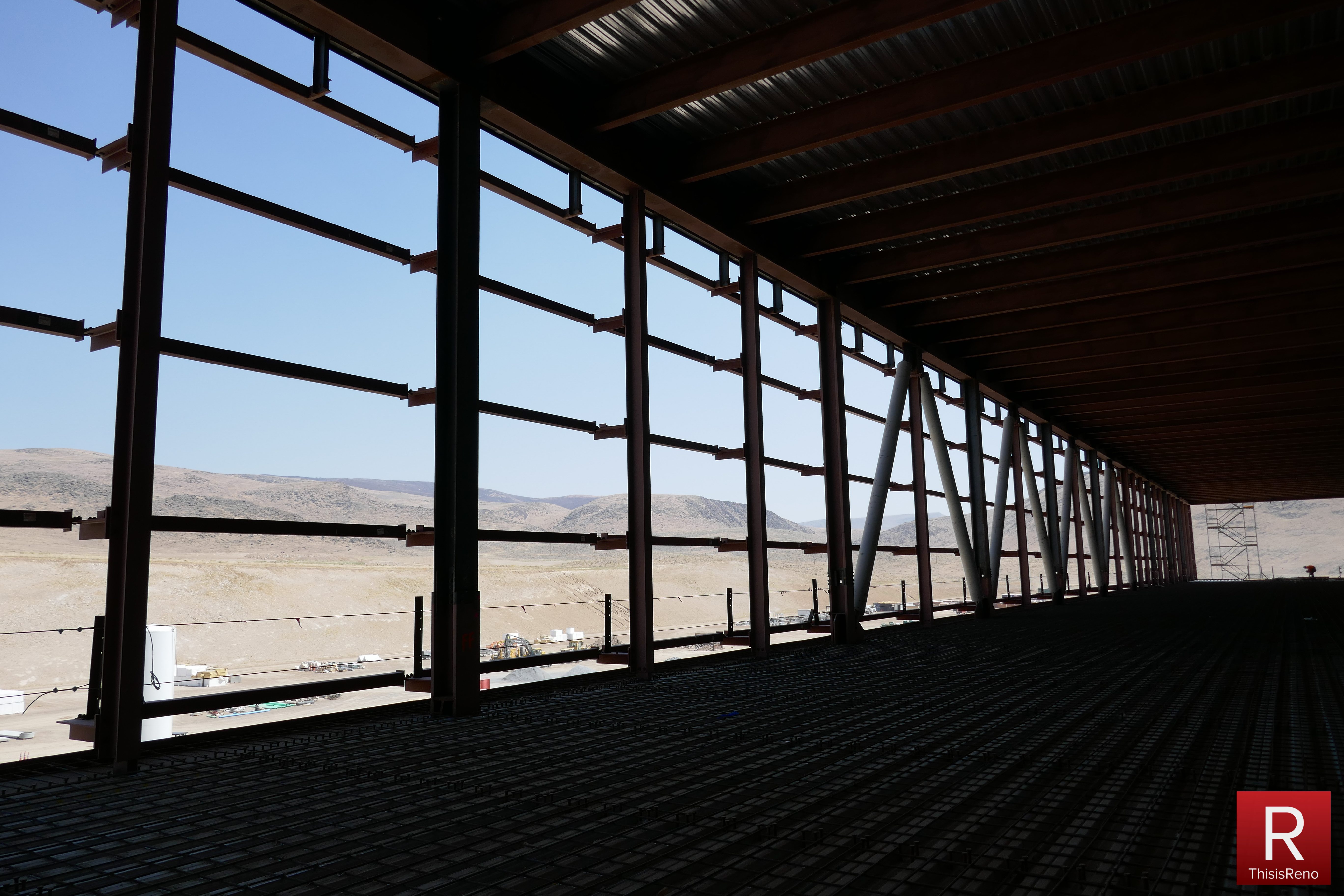 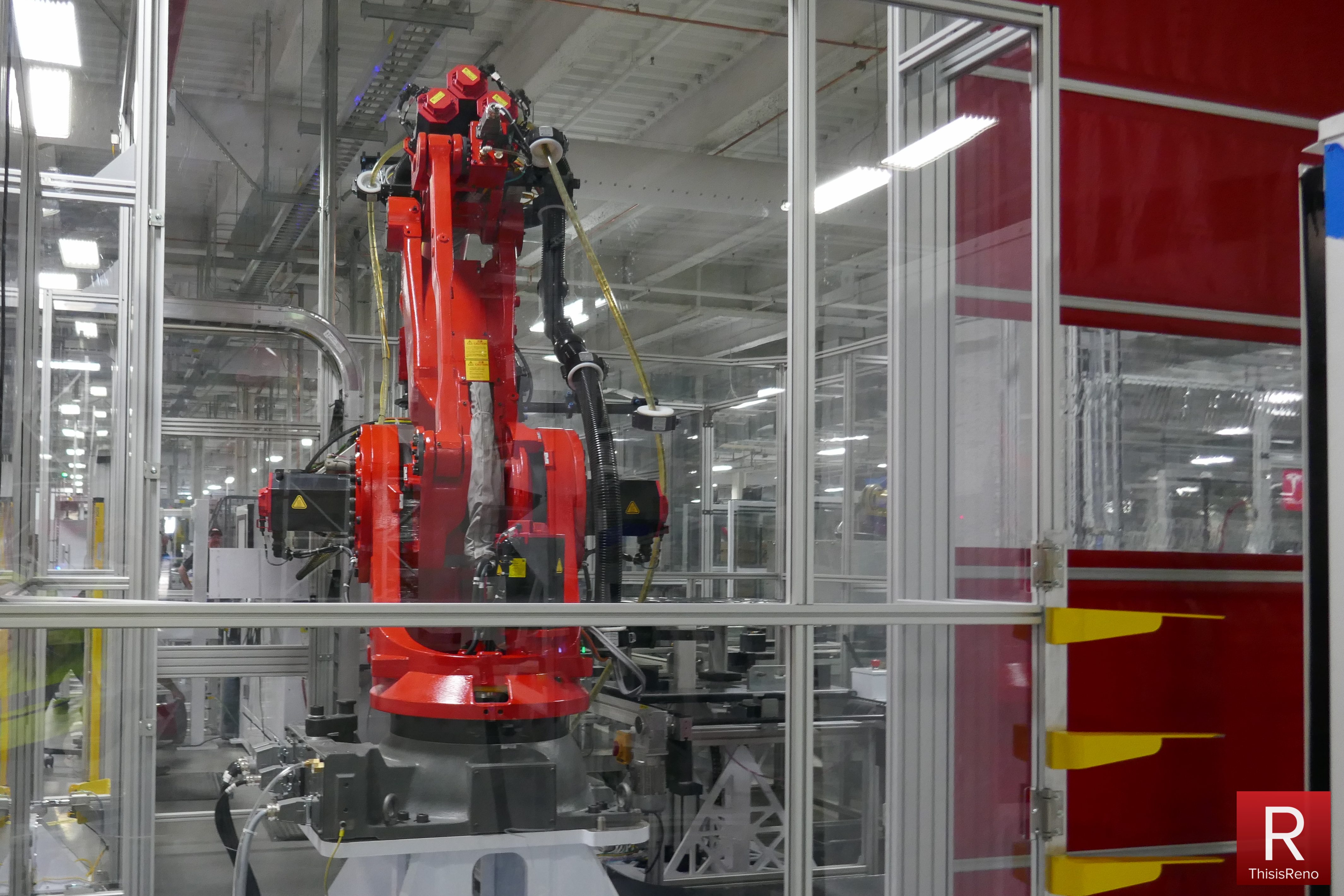 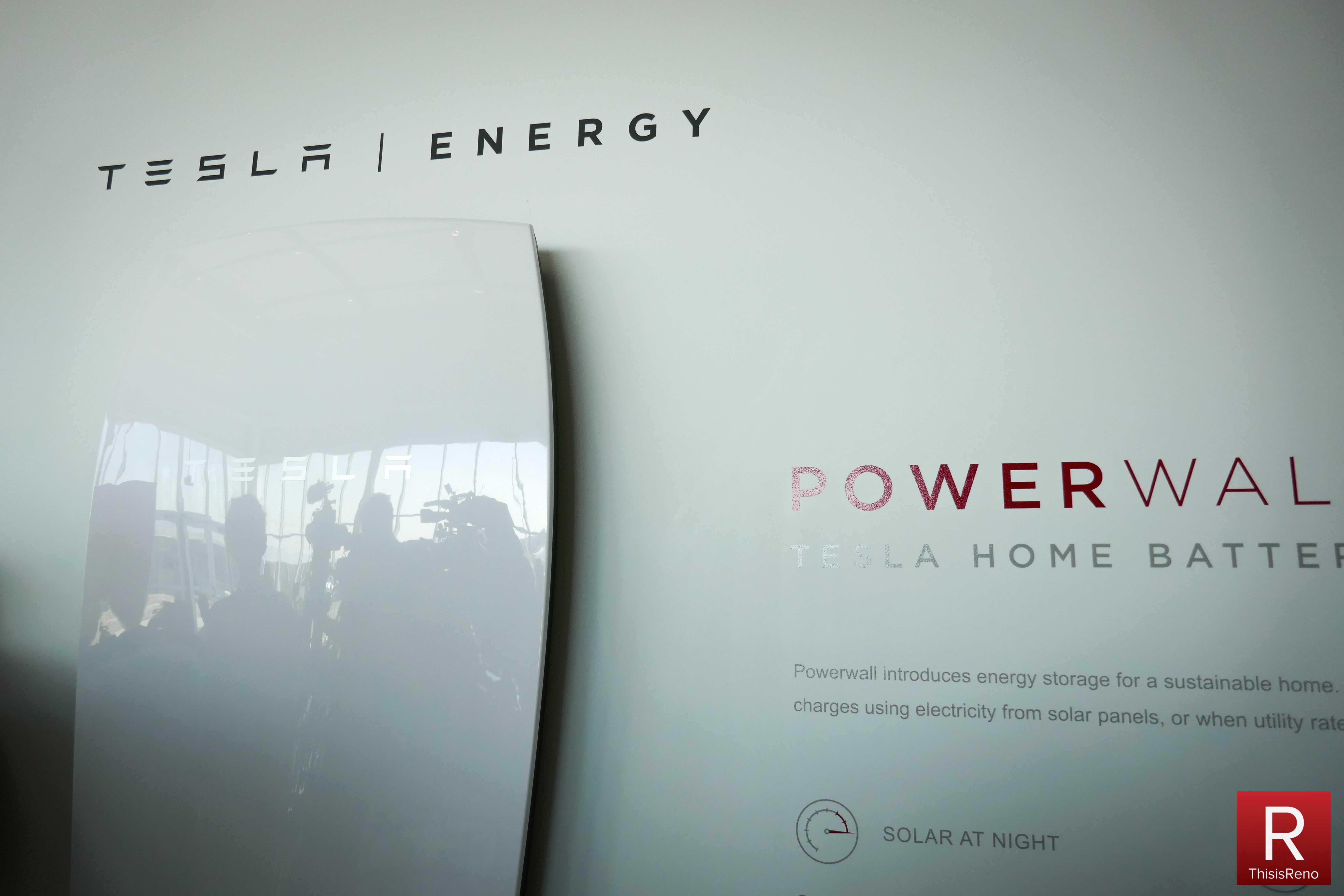 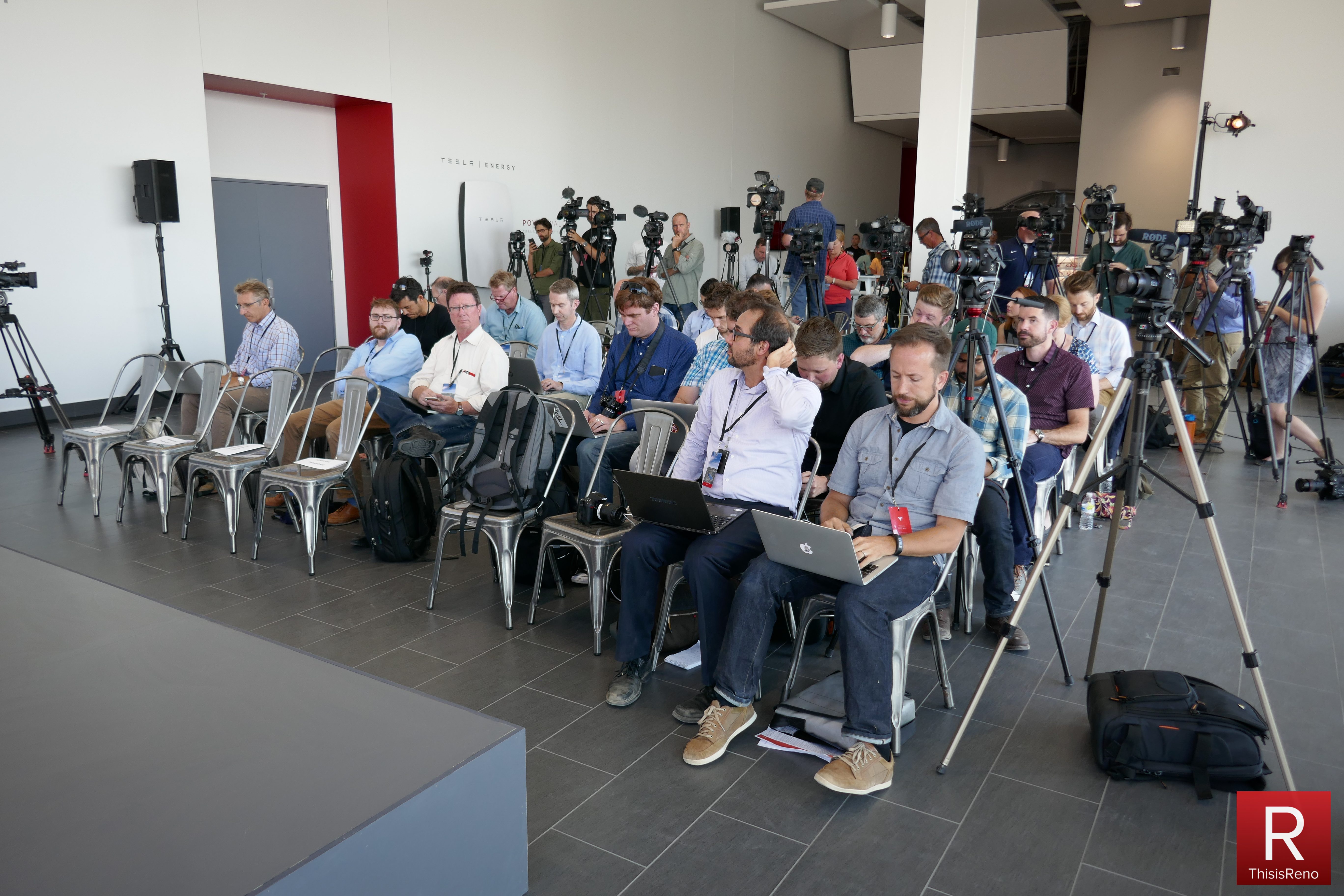 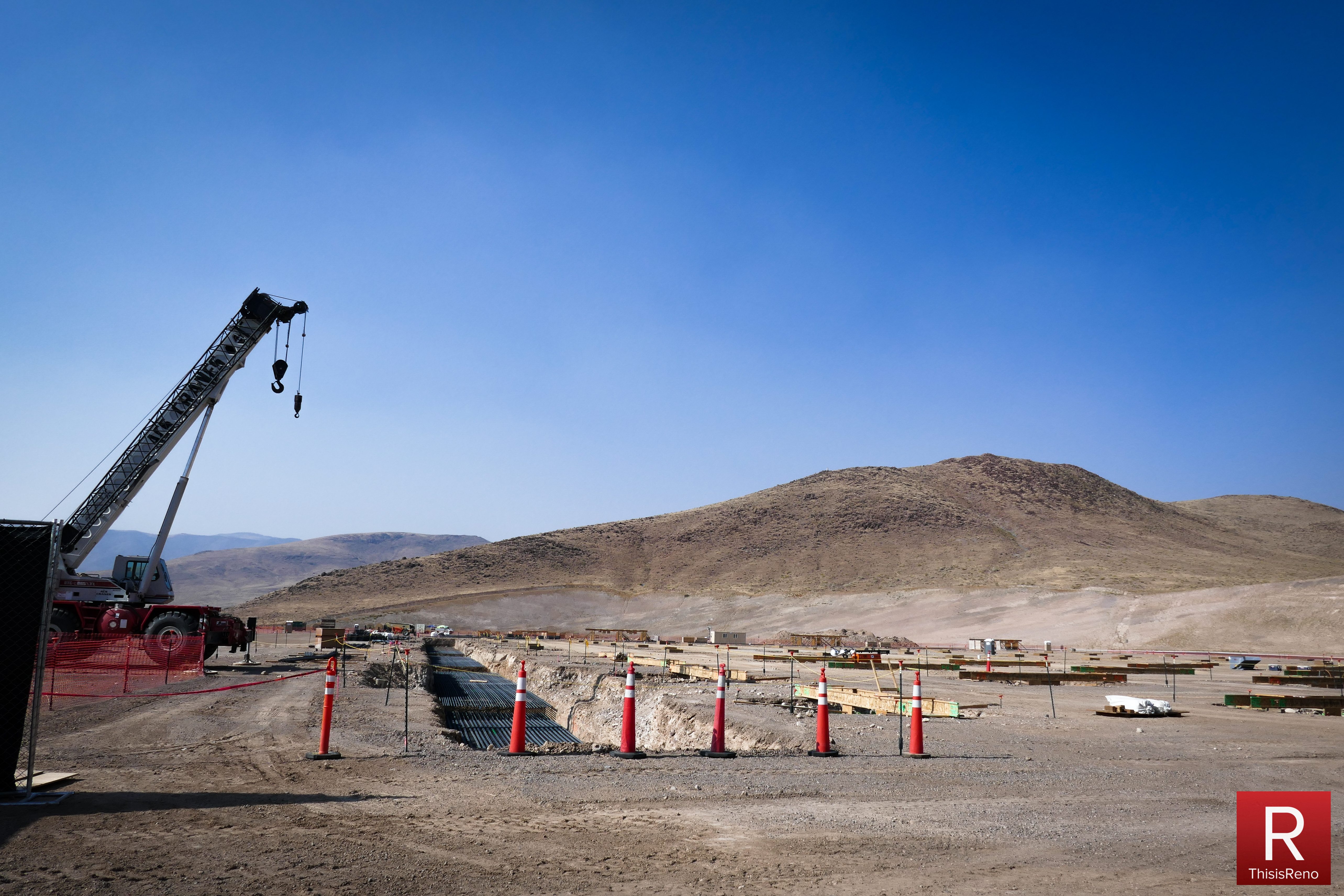 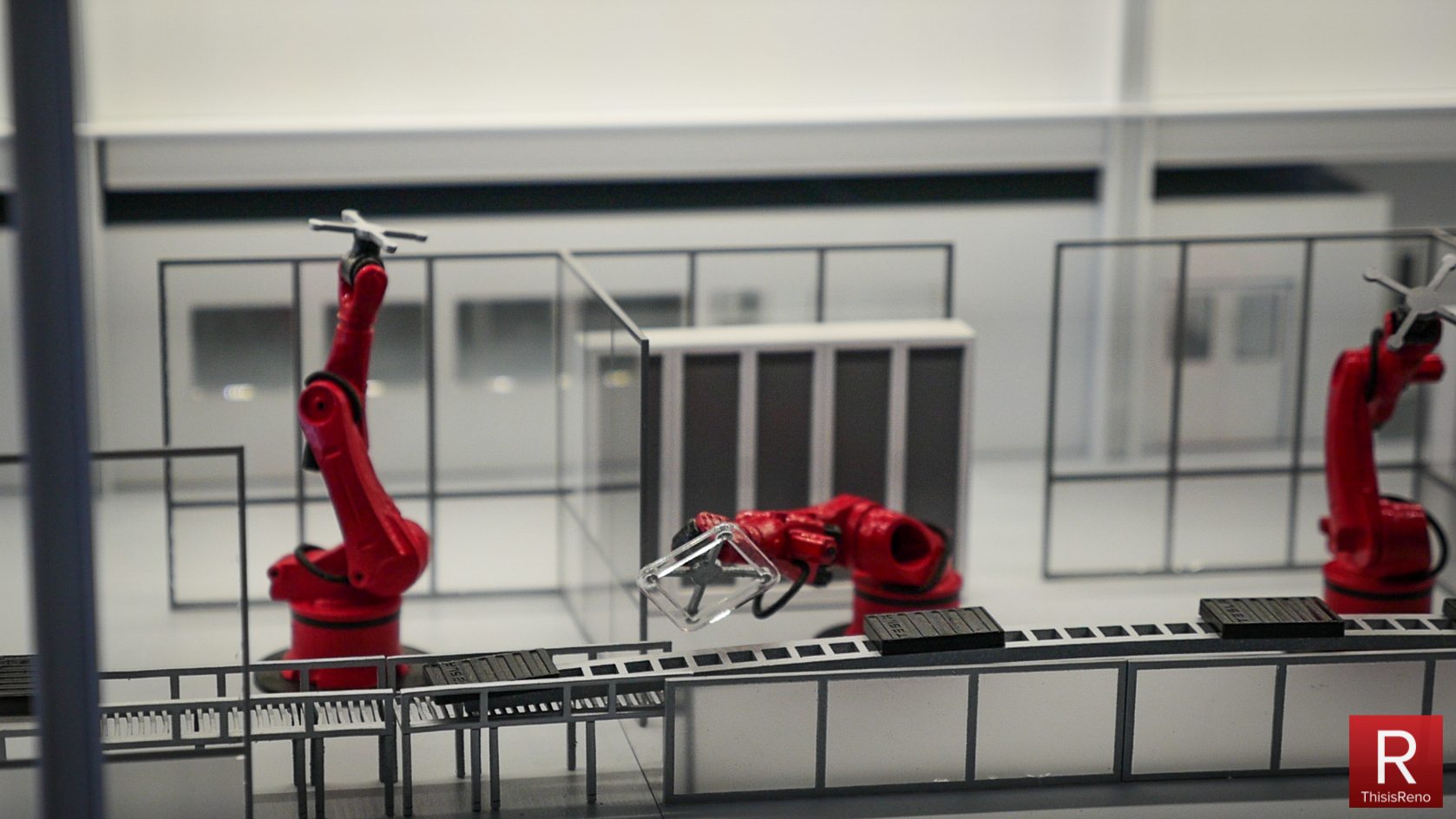 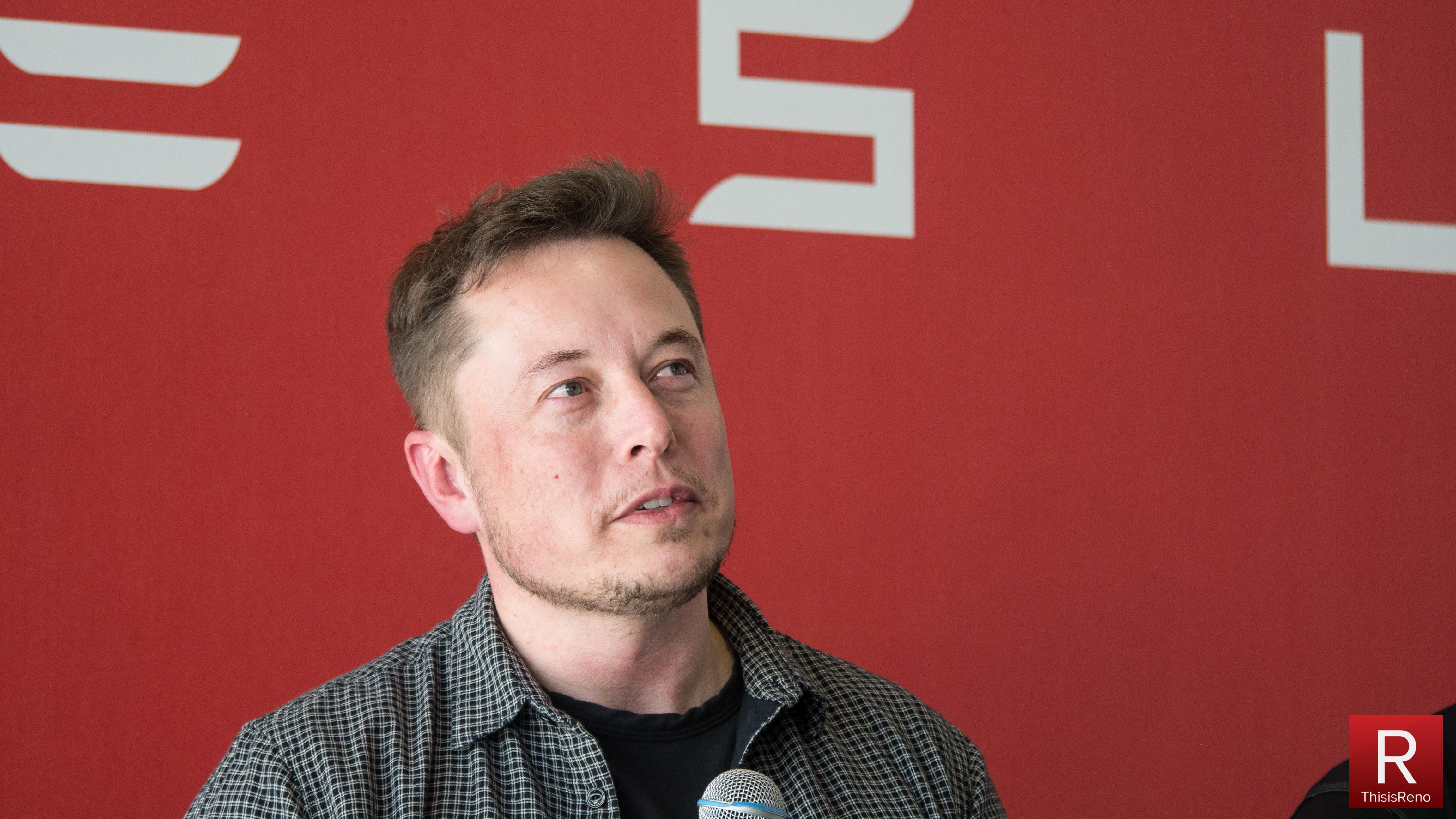 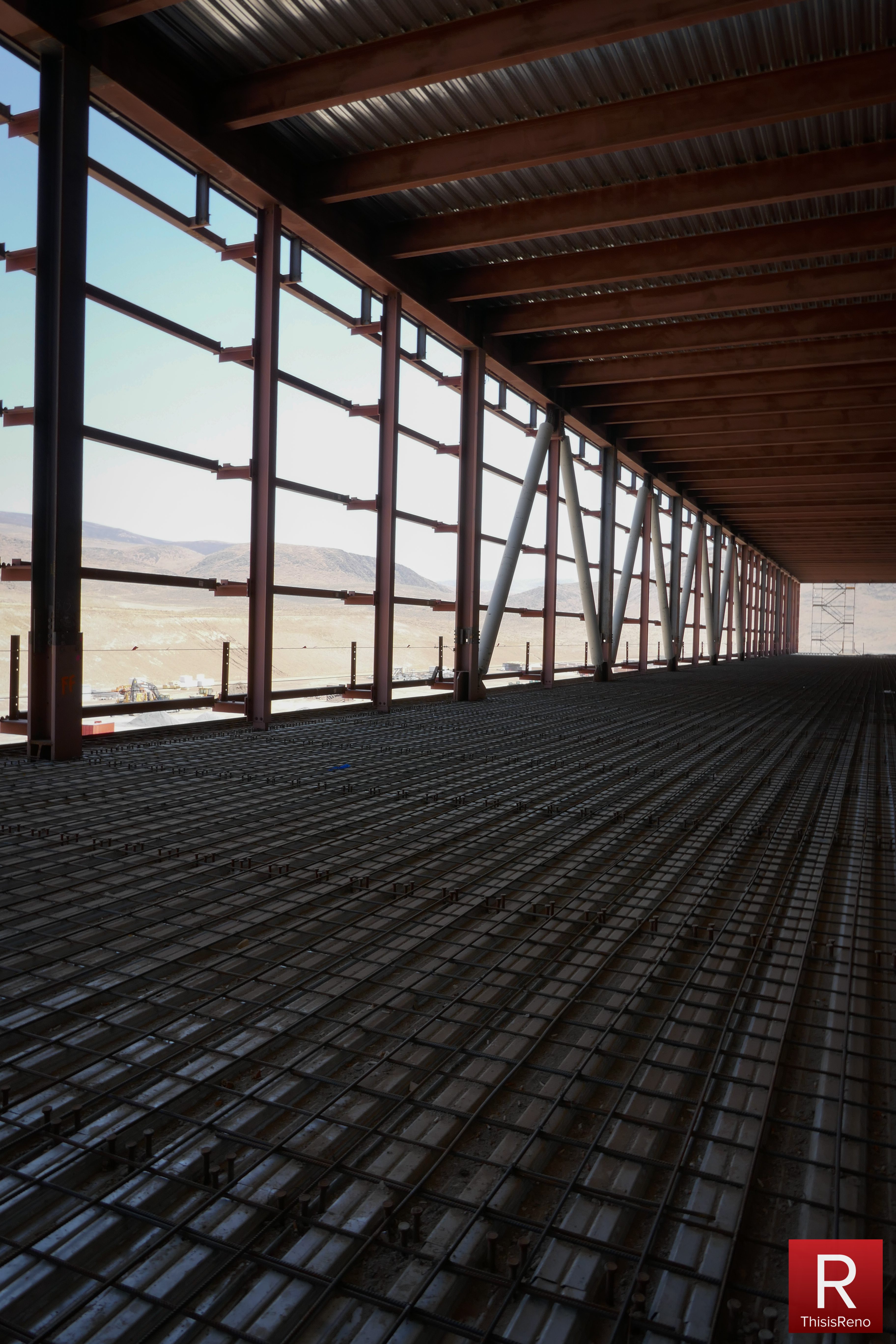 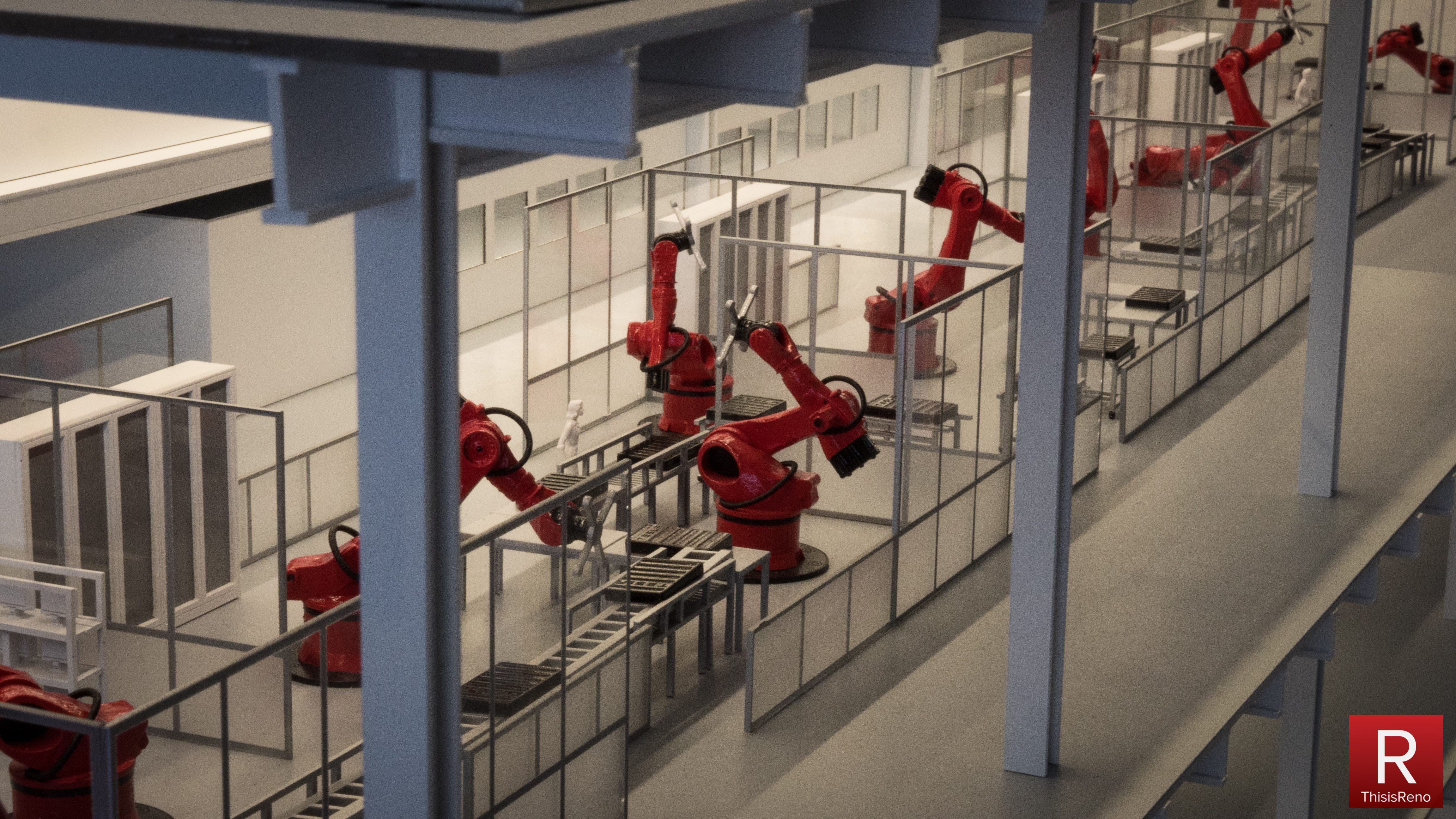 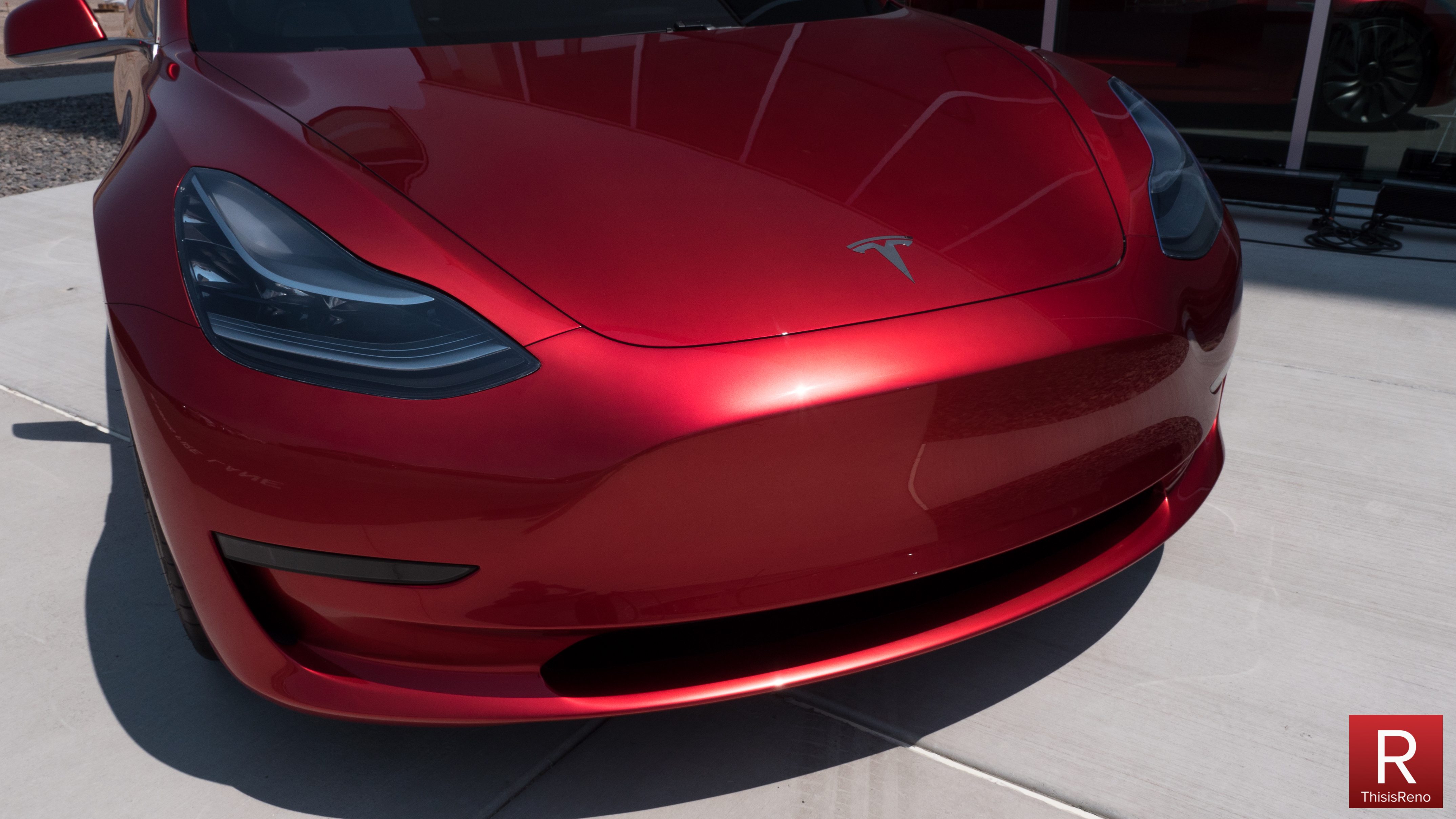 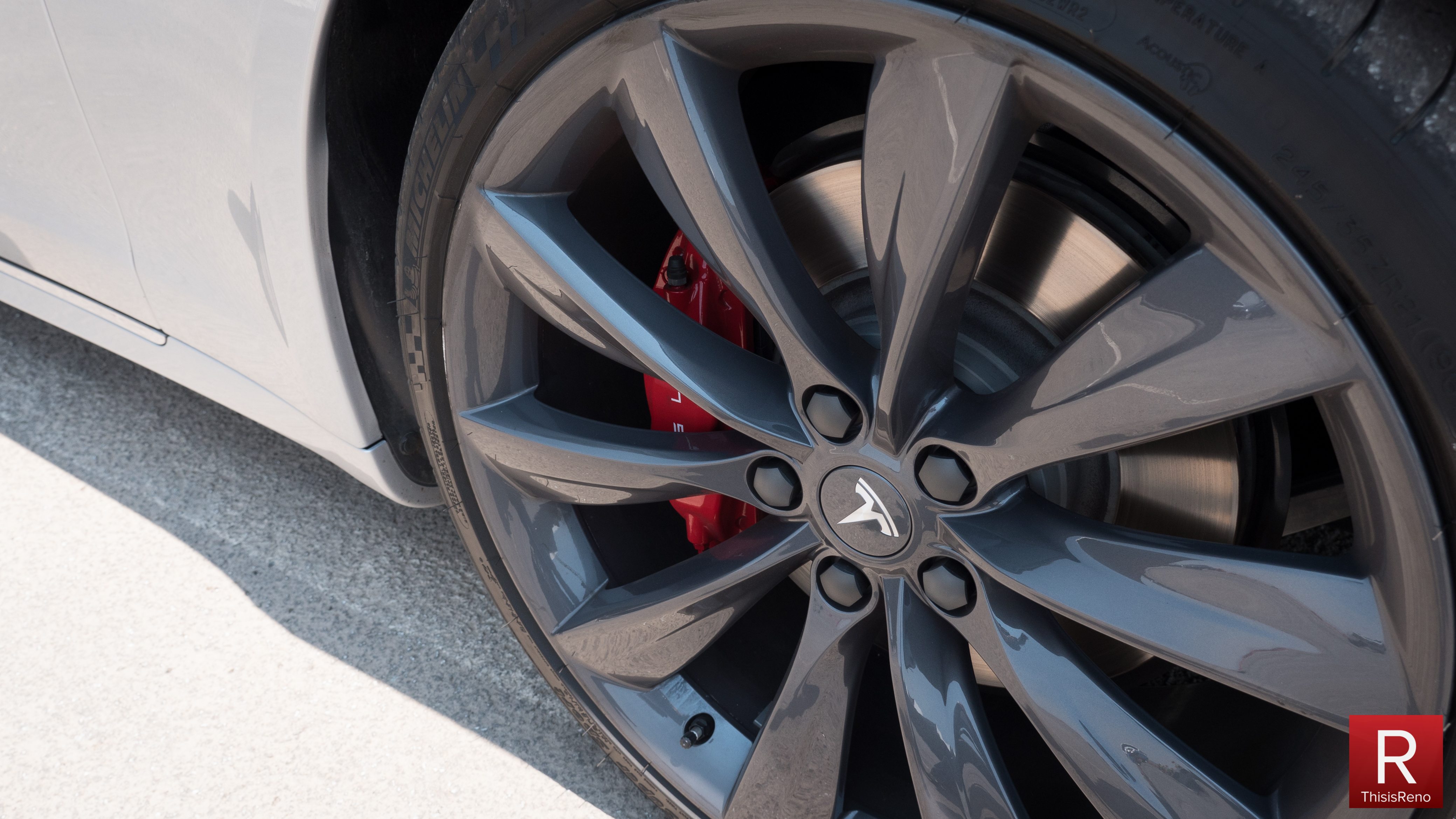 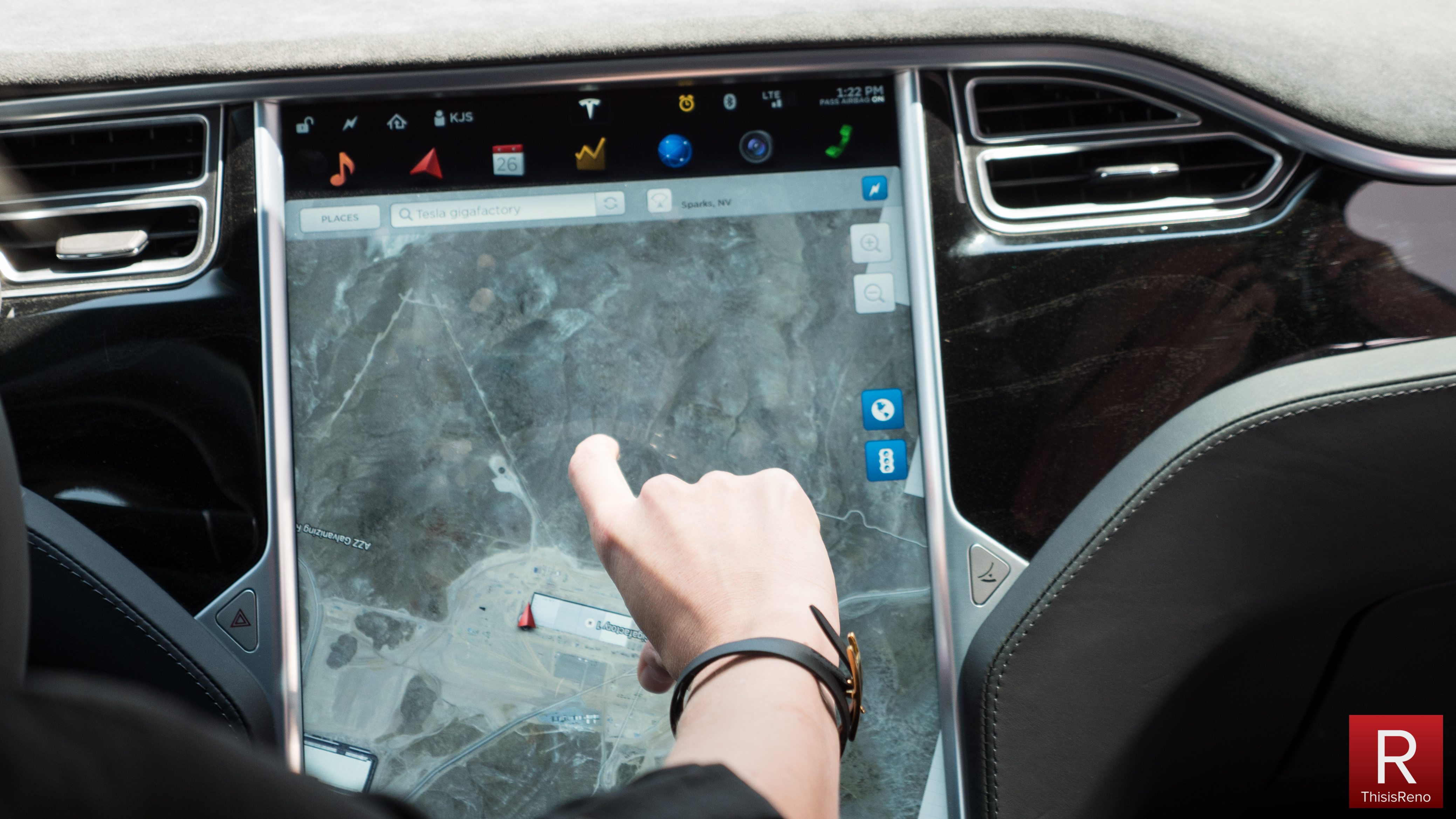 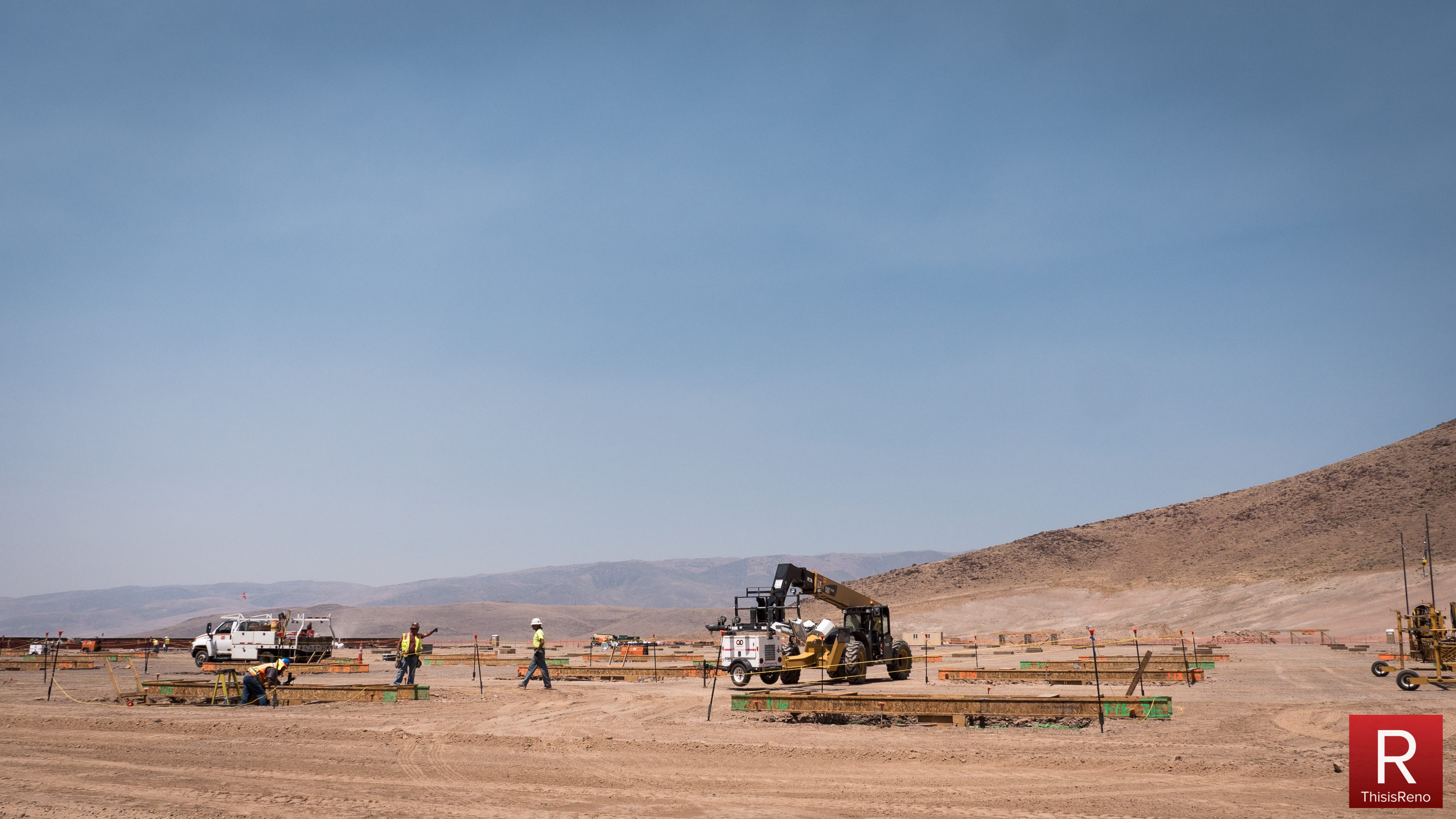 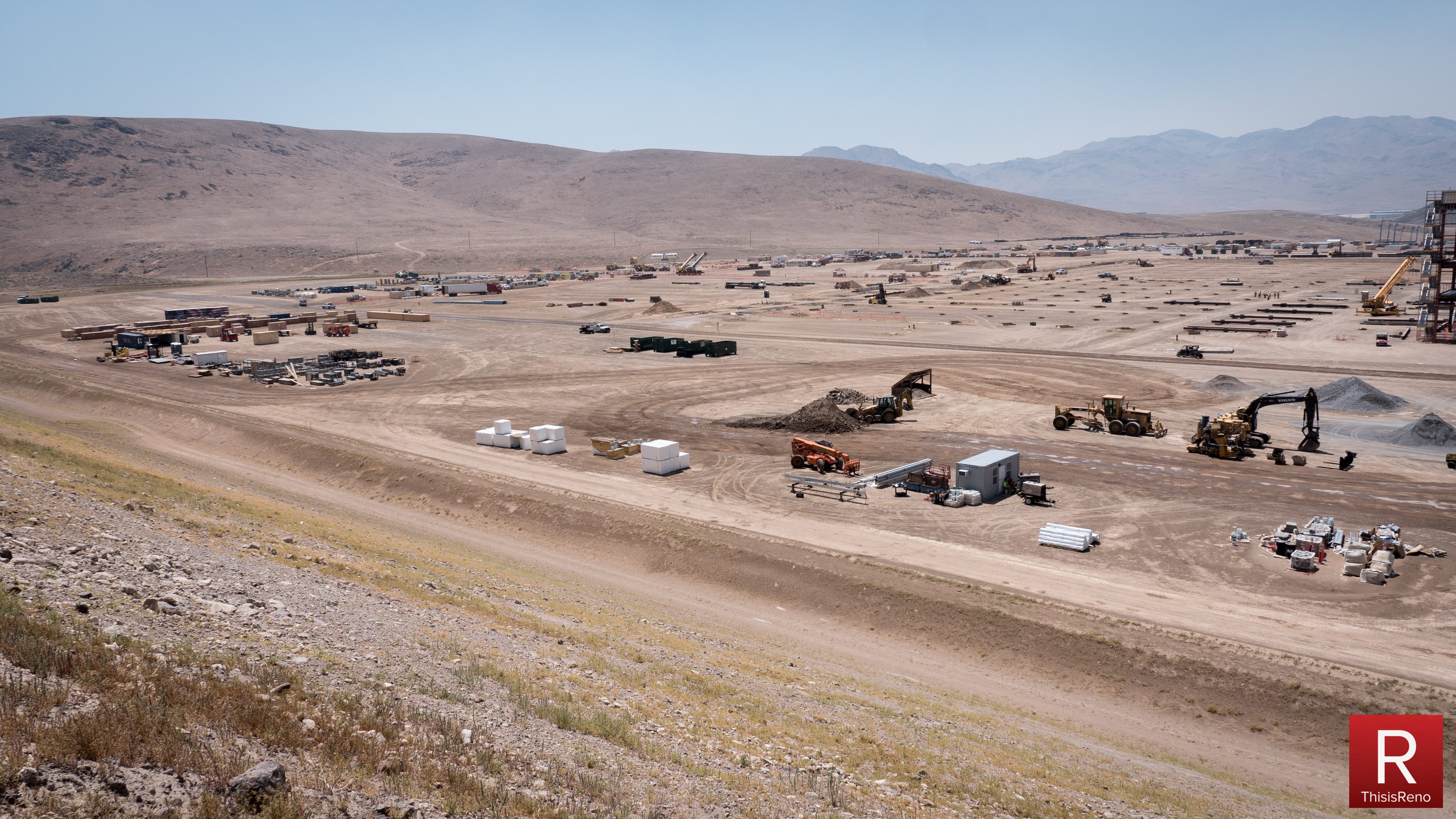 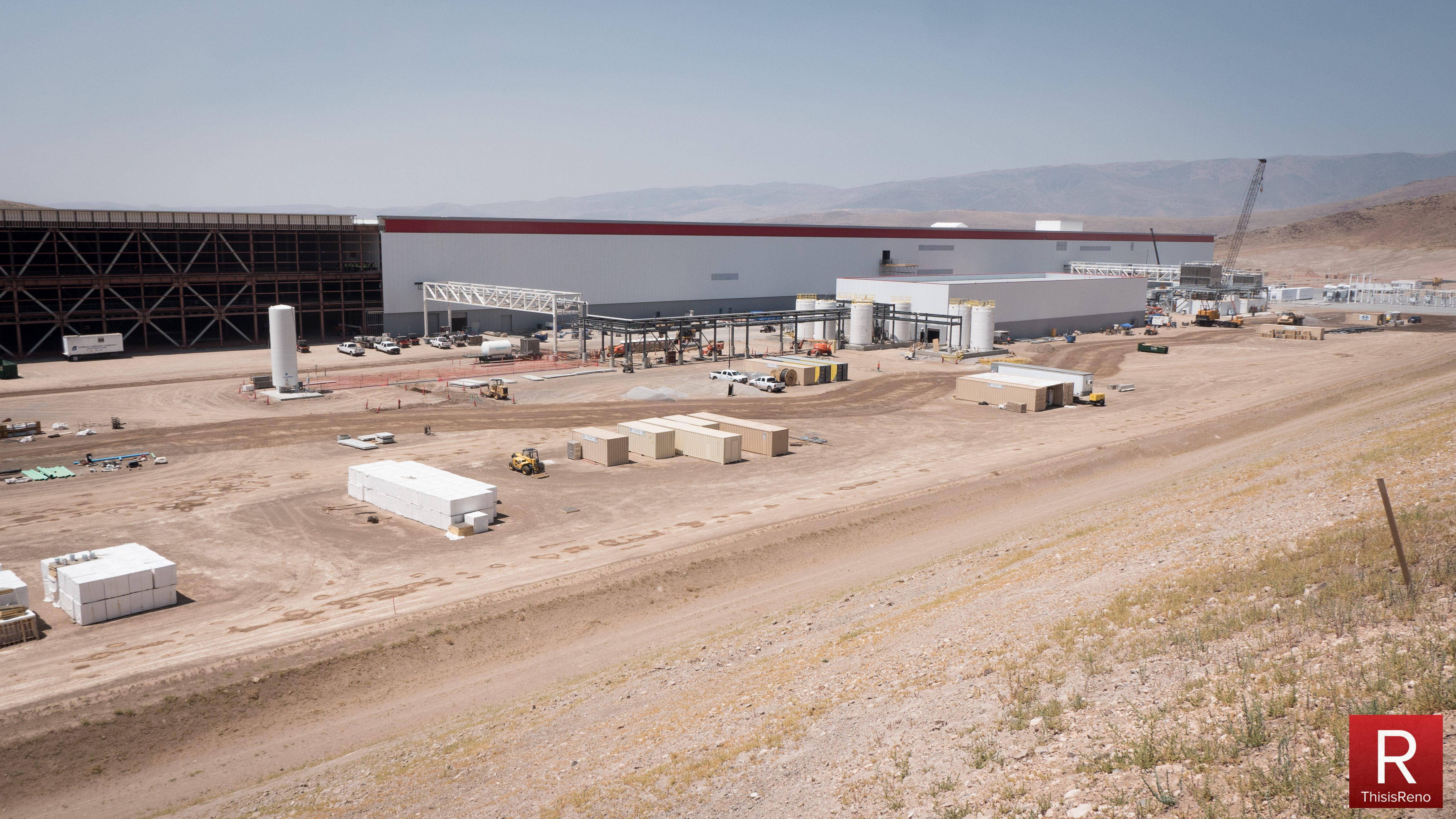 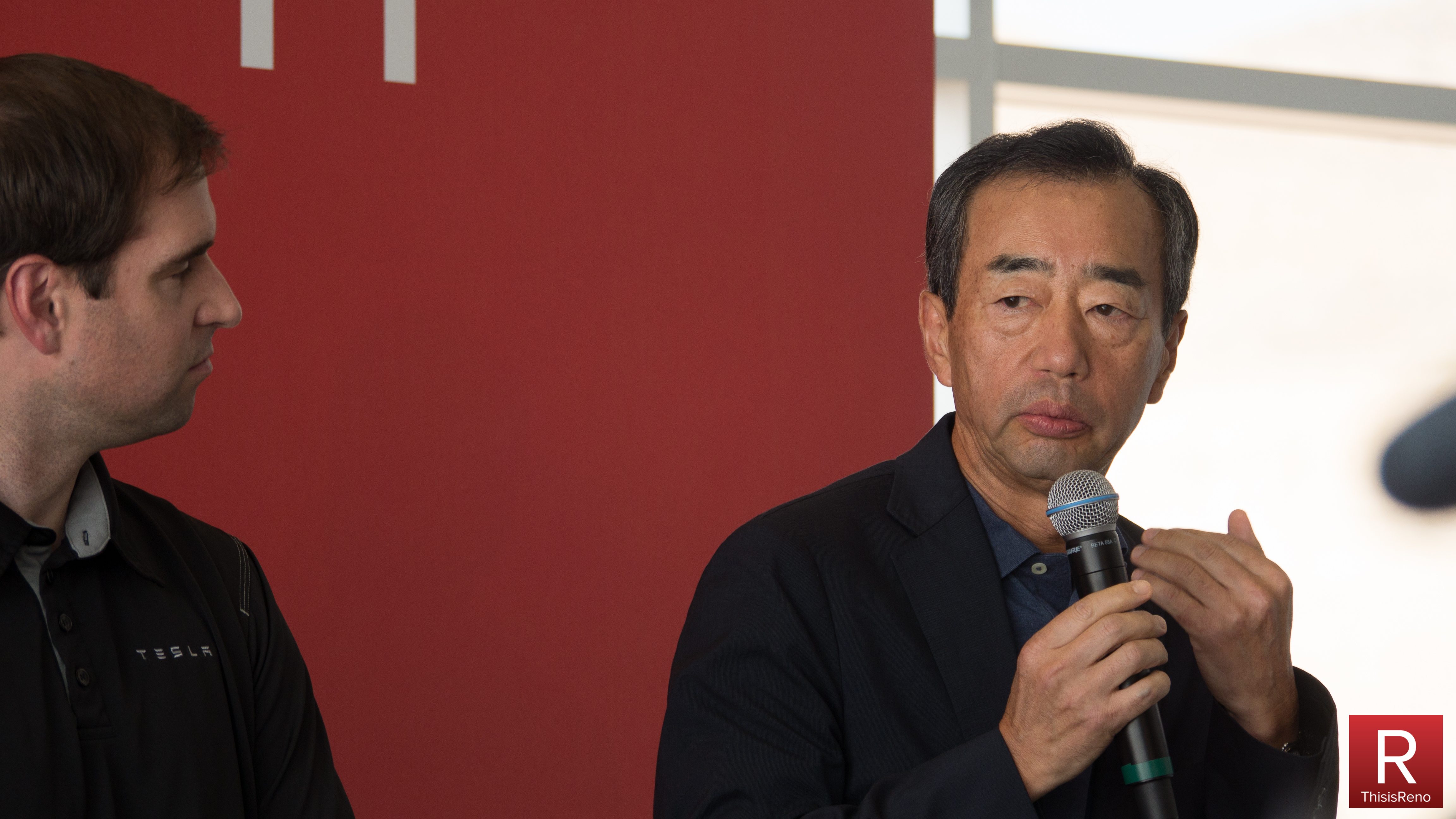 “The overall goal of Tesla is to accelerate the advent of sustainable energy,” Musk conveyed.

At more than $100,000 per vehicle for Tesla’s top-end models, the ground-up approach is far above ground for many consumers until lower-end Tesla models enter the market at more affordable levels.

Making the vehicles more affordable is one of the company’s goals, especially as the factory ramps up production in coming years.

The mission is noble and grand and, as such, fraught with on-the-ground realities that make dubious headlines seeking to put a dent in Musk’s vision. The company has been beset recently by some negative press, including the death of a driver using an auto-assist feature of a Tesla.

Musk said that he was disappointed by press coverage.

“I think we did the right thing,” he said about the fatal accident. “We have the internal data to know that we improved people’s safety not just in fatalities but also injuries because we can see where autopilot reduced the impact velocity.”

Absent, though, was acknowledgement of the factory’s local impact. Musk stuck with Tesla talking points with regard to the transferable tax credits and incentives the Gigafactory received as part of the package approved by the Nevada legislature.

When asked if businesses like Tesla can be sustainable without subsidies, Musk calmly stated: “It’s important to point out that Nevada is not paying for this facility.”

The $1.3 billion in incentives over 20 years, he added, “is a tiny fraction of what this factory’s output would be. It was important for Nevada to offer that package to show that they cared. It doesn’t move the needle on economics. I hope people understand that. Some of the articles that have been written give the impression that Tesla got a $1.3 billion check from Nevada.

“No, all we got was a concession that sales and use tax on equipment in the building — we’re not charged that for some period of time. That package was more showing that Nevada cared about Tesla being here than anything else.”

He said the incentives were immaterial to the economics of the factory.

But that’s not the point for those living with the Tesla Effect, those who are impacted by the factory’s presence and growth. Sales and use tax collections could be a boon to local governments which provide services to those living in and moving to the area.

Instead, millions of those credits are being used for Las Vegas casino gaming fees at lower than face value, as we first reported last month.

Ancillary benefits, such as job creation, are what the state gambled on when recruiting Tesla to Nevada. While the Gigafactory is a positive for job growth, particularly in construction, housing, traffic, overcrowded schools, homelessness and unrestrained growth without associated service increases also come with the Tesla vision.

“State and local governments that depend on those taxes for funding to provide services — when we give those credits, they’re deprived of those funds,” he said. “The argument that is made over and over again … is that if we only get 25 percent of what they should be paying, then that is 25 percent more than we would’ve got if they weren’t here.

The Kenny Guinn Center for Policy Priorities warned that such tax credits may not be sufficient.

“Frequently, jobs created by development incentive packages fail to exceed the value of what states give away in uncollected tax revenue….” wrote the Center’s Nancy Brune in 2014. “Transferable credits usually sell at a discount, meaning that the selling firm receives less than their full value. The state, however, still forgoes the entire original amount.” 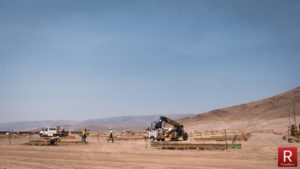 Nevada’s economic drivers, particularly in Northern Nevada, are banked upon, at this point, advancing industrial development.

A common refrain is that area development and growth is not being mitigated with service increases. One example: Law enforcement staffing remains at decades-old levels despite the physical expansion of our urban boundaries and population growth.

One ThisisReno reader commented that the Gigafactory is the reason she couldn’t find affordable housing.

In fairness, Tesla is not to blame; arguably, all of these impacts would be on the rise absent Tesla, and the company, which is contributing significantly to local economies, is a convenient target.

But the Reno area is being hit hard for those on the lower rungs of the socioeconomic ladder with Musk’s vision being at least a component of area issues.

A large banner greets visitors to the Tesla Gigafactory warning of an ongoing labor dispute. The press event gave no indication that such a dispute exists. Tesla was proud to cite the number of Nevadans working at the site and how the company is exceeding state requirements for hiring.

Outside the factory, those hundreds of workers toiled in the 100-degree heat. They will be working there for years to come, building what Musk called something that is “incredibly romantic.”

Close to 10,000 people will ultimately be employed there, he said.