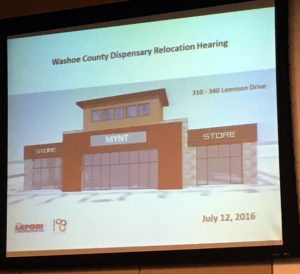 A new medical marijuana dispensary was approved today to set up shop on Lemmon Drive in the North Valleys. Clinic Nevada LLC was originally slated for Mt. Rose Highway, but the Washoe Board of County Commissioners approved the shop’s relocation to Lemmon Drive and Buck Lane.

Traffic issues were cited as a concern for the dispensary’s relocation to the North Valleys, as the Lemmon Valley / U.S. 395 area has been rated as an area of concern by the Regional Transportation Commission (RTC).

“Those … who don’t want (medical marijuana establishments) in their district, they shouldn’t get any of the benefit of (them),” said Commissioner Kitty Jung, in response to those who are opposed to having medical marijuana facilities in their neighborhood.

“We’re very proud to work with the county on this project,” said attorney Joey Gilbert, speaking on behalf of the facility.

A building rendering referred to the dispensary as “Mynt.”