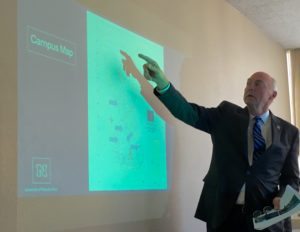 UNR President Marc Johnson said that relocating the homes is the only option to meet growth needs.

“Relocation is our only alternative to create (the) kind of footprint (needed for campus expansion),” Johnson said.

But the presentation to the commission was met with resistance, with some commissioners noting that UNR’s plans have not changed much from an April meeting at which UNR  mentioned relocation as a priority.

Johnson said that since that time the university has been reviewing the HRC’s priorities, and he prefaced his remarks by citing UNR’s growth statistics.

“We have this geographic gap between the university and downtown,” he said. “We’ve done a great deal of infill into the campus, but to grow any further, we need additional space … which is why we’ve been focusing on the Gateway area.”

Under proposed plans, the six houses on the west side of Center Street would need to be moved. One of those homes is on the city’s and state’s historic registers. Those structures, Johnson said, could only house 29 offices for faculty while a new business building would contain 180 needed offices, plus classrooms, lab spaces and study rooms.

Johnson said it would take about 10 years to raise enough funds to build four buildings on both side of Center Street. He ended his presentation with a question: “How can the University and the HRC partner to relocate the homes?”

Commissioner Melinda Gustin said that the proposed, five-story business building does not visually correlate with the idea of bridging UNR with the downtown area.

“I really think there is a gap between … where we are today and how we arrived at this solution,” she said.

HRC Chair Alicia Barber said to Johnson, “Your final slide tries to push us to a question that we’re not (prepared to answer) yet.”

Commissioner Mercedes De La Garza added that “it’s not a very creative solution for that block. I didn’t feel like we were given more options (other) than relocating the homes.”

Barber reminded the group that City Council’s direction had a list of priorities for the homes. Relocation was toward the bottom of the list and should only be consider in lieu of demolition.

Johnson proposed that members of the HRC meet with UNR more regularly to to address some of these issues.

Councilman David Bobzien, the liaison between the HRC and the City Council, complimented Johnson and called it a generous and productive offer. No further action was taken.