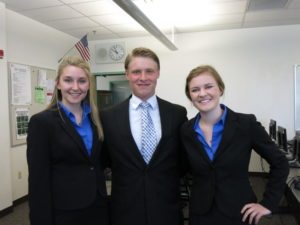 McKayl Turner was a pretty normal high school grad gearing up for college. But last week that all changed.

“So then we’re standing on stage with ten other people and you don’t know what place you got,” she says. “So they start calling people one by one off. And then it got to second place, and then I remember we all just started freaking out, because we knew we were national champions.”

Turner, along with two classmates, won the annual 3-D animation competition hosted by the Future Business Leaders of America.

One of her teammates, Michael Caron, built the video’s mascot, a robot named Cody. Their use of a robot helped set their project apart, but team member Jordan Jacobson says they also added some local flair.

“We based the people off of the teachers from Damonte Ranch to give it a little more personalization,” she says.