VIDEO: Fracking Protest Ends With One Arrest, One Citation 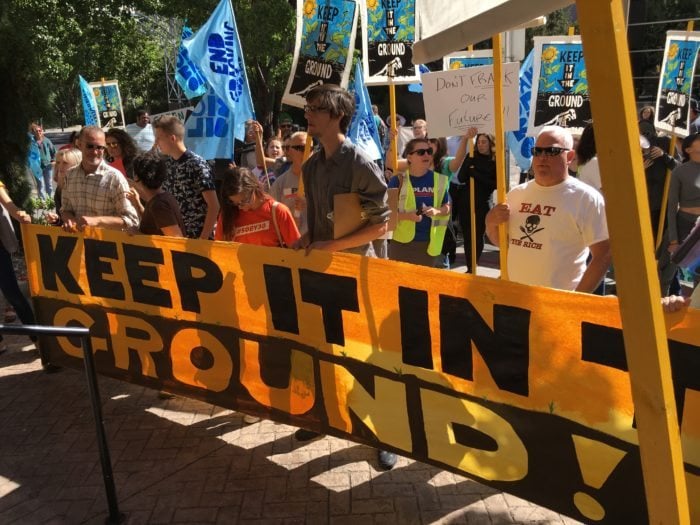 A protest against fracking today ended with an arrest as dozens of protesters — police estimated about 100 — stormed through the Siena Hotel looking to interrupt a Bureau of Land Management’s (BLM) sale of oil and gas.

Protestors held banners and signs that read, “keep it in the ground” and “frack free NV.” There were even performance artists, clad in black bodysuits, who staged a “die-in” in the entryway of the casino.

Bob Fulkerson with the Progressive Leadership Alliance of Nevada was arrested for trespassing during the protest and, according to police, another person was cited for trespass.

Ruth Breech of Rainforest Action Network helped organize the rally against the sale that protesters say would allow fracking on Nevada’s public lands. 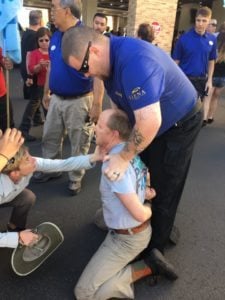 “What we have here is the Bureau of Land Management contracted with the Siena Hotel to hold the auction, to increase capacity, increase security, whatever reason, but they’re here, and the public has access to that auction,” she said. “The hotel security was very adamant that this was private property and immediately violently detained one of our leaders — threw him to the ground (and) cut his chin open, and then as we came in to the second floor to go into the auction, another person was detained quite violently as well.”

She said another issue with the event is that nobody was in the auction room at the advertised time.

“It’s really unclear whether the auction has been canceled, whether it’s moved to another room, and as a federal agency, there’s a huge transparency issue here.”

Chris Rose, BLM spokesperson, said they moved the sale once they heard about the protesters.

“We actually planned for potential disruptions based on past sales and things that have happened in other states, so when the protest occurred we went to our plan B and moved the bidders and BLM staff to an alternative room and conducted the sale there,” he said. “If, like in the past, if the protestors had come in and observed the sale and not been disruptive, we would’ve conducted the sale with public viewing.”

The federal agency is mandated by law to hold these sales quarterly, Rose added. He said that it’s a misconception that oil and gas sales will end up leading to fracking on Nevada public lands. He added that fracking is one of a number of tools used for potential exploration and development of land, but fracking would have to be approved through by the state.

The BLM generated $31,027 during today’s lease sale, selling 3,765 acres located in the Battle Mountain District. The sale high bid was $21 per acre.

The Reno Police Department described the demonstration as peaceful.

“Reno Police worked with the protest organizers and created a safe zone on Lake Street between Mill and 1st for them to continue their protest,” said RPD Office Tim Broadway. “Although there were short delays in traffic and the RTC bus route, officers were able to keep the area safe for everyone in the area.”

Judge says no evidence of massacre at proposed mine site,...

Permit issued for archaeological survey at proposed lithium mine site