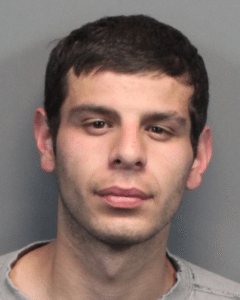 A Washoe County Sheriff’s Office investigation into a stolen vehicle from Hidden Valley has led to the arrest of 22-year-old Robert Lopez.

Lopez was identified through a Secret Witness tip. He was arrested by Sparks Police on May 29, 2016.

The suspect is believed to be responsible for a string of vehicle thefts and vehicle burglaries that occurred throughout the south Reno in the last two weeks of May.

On May 23, Lopez used a credit card related to one of the stolen vehicles at a 7-Eleven store, according to the sheriff’s office. Investigators obtained surveillance photos of the suspect from the store. Those photos were made public, leading to Lopez being identified by a Secret Witness tip.