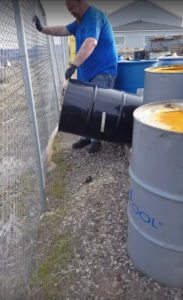 UPDATE: June 24, 2106. The original video has been removed from Youtube, but a handful of reposts of the video are still available. You may watch one version below.

A video has gone viral on Youtube since yesterday with more than 400,000 views (watch it below). It shows an unknown substance being poured onto bare ground, claiming to be in Nevada.*

The Youtube user’s name is Luke Murray and the video is titled “Illegal dumping by nv company.” The voice narrating the video says, “We’ve been ordered to dump these barrels — two or three a night — and then burn ’em out.”

The Nevada Division of Environmental Protection is investigating.

According to Public Information Officer Jennifer Ramella, “The Nevada Division of Environmental Protection has received reports related to the YouTube video and is currently investigating to determine the extent and veracity of the claims.”

“I want to get this on fucking camera, man,” the video’s narrator says. “This is what we have to do or we’ll lose our jobs.”

The person pouring from the barrel in the video appears to say “This is all the sludge from our (unintelligible) wash machine.”*

One barrel in the video is labeled Hocut 795-H. A safety data sheet identifies the substance as hazardous metalworking fluid.

RGJ ran the story as well and reported that the company is Production Pattern & Foundry based in Mound House.

As reported in RGJ: “This has caught everybody by surprise,” spokesman Craig Banko said. “We found out about it this morning. Any product down at the paint shop can be dried out and thrown away. That is the proper disposal method, pitching it over a hill is not.”