RSCVA Outlines Goals For Next 5 Years 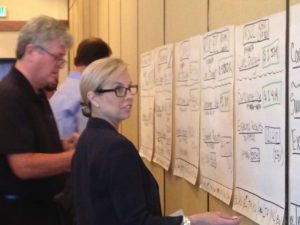 A five-year strategic plan that focuses on destination awareness, room night growth and facility efficiency, along with ways to use funds for capital projects, was approved Thursday by the Reno-Sparks Convention and Visitors Authority.

The RSCVA plan is a living document that can be amended in the future as things change, such as the economy.

Financial policies included establishing a rainy day fund for emergencies and building an ending general fund balance of 10 to 15 percent. Plans call for putting 1 percent of room tax revenues into the fund, eventually building it to $1 million. The board also agreed to contribute $500,000 annually toward marketing efforts to airlines and eventually building up a $1.5 million airline marketing fund.

“What you do with Southwest today speaks volumes tomorrow,” said Murdock, vice president of sales and marketing for Eldorado Resort Casino.

Destination awareness will target direct markets with direct airlift to Reno. Growing convention business, particularly on weekdays, will be key, along with leisure, sports, concerts and livestock/equestrian events.

RSCVA staff requested hiring a corporate sales manager and administrative assistant to attract conventions, which would collectively cost $182,000 in salaries and benefits. It would make the organization more effective, more efficient and less bogged down, said John Leinen, vice president of sales. Coordinating with other events to ensure nothing is double booked is also key.

“We’ve had some great growth. We’re moving the needle, but it’s not where it needs to be,” Leinen said. “We’re seeing progress. Is it fast enough? No. Is it headed in the right direction? Absolutely.”

The funding source to improve facilities is the hotel room surcharge. State lawmakers in 2011 authorized municipalities to set up funds to pay for costs of improving and maintaining facilities with the exception of minor league ball parks.

There was also discussion about partnering with the Las Vegas Convention and Visitors Authority. Rossi Ralenkotter, LVCVA president and chief executive officer, spoke to the RSCVA board Wednesday evening at the Hyatt Regency Lake Tahoe Resort in Incline VIllage.

RSCVA board members reflected the next morning on the meeting with Ralenkotter. Ideas included making research-driven decisions, expanding focus from tourism to building community and even taking up Ralenkotter’s suggestion to open an office in Washington, D.C. in the vacant office next door to LVCVA.

Sparks Councilman Ed Lawson pointed out that Las Vegas spends 35 percent of its marketing budget on social media and has updated its site each of the last 3 years.

“Our web site could be more interactive,” Lawson said.

“We’ve always been a tourist-driven community but need to look outside the box,” said chairman Bob Lucey, also a Washoe County commissioner. “We need to rebuild our brand. We need to change our perception of what we are and who we are.”