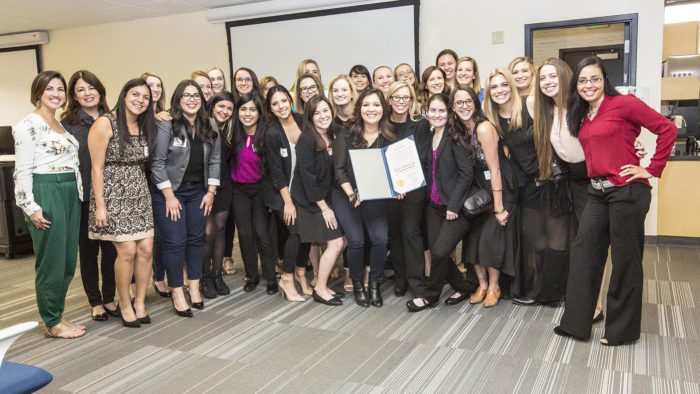 Designed to build a stronger alliance of female entrepreneurs, the new initiative partners female University students with leaders in the community

RENO, Nev. – University of Nevada, Reno student and community leaders gathered to celebrate and promote women in entrepreneurship at the launch of the Ozmen Center for Entrepreneurship Women’s Initiative, Thursday, May 26 at the University of Nevada, Reno’s Innevation Center Powered by Switch. The launch included a mayoral proclamation from Reno Mayor Hillary Schieve, a screening of the first video in a series designed to promote female achievements in local entrepreneurial activity, and a brainstorming exercise to address women’s issues in entrepreneurship.

The Women’s Initiative is aimed toward connecting innovative female entrepreneurs with leaders and established professionals and business owners in the community. It will also highlight female business achievements in and around the community.

“I think a lot of people don’t understand that the key to developing a business is not really capital,” Howard said. “It’s having the right people and the right connections. These kinds of events allow people to connect and share ideas and find out that, ‘wait a second, I can be a resource for that person or they can be a resource for me.’ That’s really what develops business at the entrepreneurial level.”

The idea for the Women’s Initiative began after members of the Ozmen Center noticed that no women entered the 2016 Sontag Entrepreneurship Competition, a program of the University’s College of Business. The Ozmen Center’s Assistant Director Kylie Rowe said her hope with the Initiative is to engage female entrepreneurs and to give women more confidence and connections to make their dreams a reality.

In 2015 the number of female-owned businesses grew 1.5 times the national average, more rapidly than any other segment of the population, according to Fortune. However, there is still a lack of representation and engagement among the growing segment of female entrepreneurs. Community leaders such as Schieve, a business leader in her own right, acknowledged that women face a separate set of challenges than men when it comes to starting a business. She sees the Initiative as an excellent way to bridge the gap and propel the city’s economy forward.

“I think our possibilities are endless,” Schieve said. “I don’t think there has ever been a better time to open a business in Reno. We are thriving, and you could tell today, given the support of women at this event. We’ve never seen this kind of momentum and certainly not in female entrepreneurship.”

Though Howard observed a cultural predisposition toward associating entrepreneurship with men, he feels the introduction of the initiative will dispel those notions and help the community realize the important role women play in the local and national economy.

“This initiative is designed to support female students as they launch into their careers,” Howard said. “We want to address any potential stigma and help them better understand and facilitate many of the opportunities available to them.”