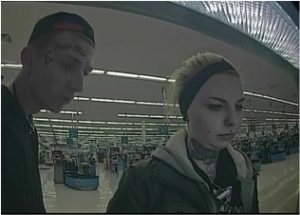 UPDATE: Parrish was located and arrested by Reno PD.   The female in this case is still outstanding.

The Reno Police Department is looking for two suspects in a fraud case. Police said that in May they received a report of a fraud case involving a male and female.

“The suspects in this case were caught on bank surveillance video depositing fraudulent checks in an ATM machine. Through the course of the investigation, Detectives were able to identify the suspects,” RPD said in a statement.

RPD said that they have probable cause to arrest 24-year-old Harvey Parrish (DOB 09/06/91) and 21-year-old Haley Douglas (DOB11/05/94) for forgery, burglary and uttering a forged instrument.