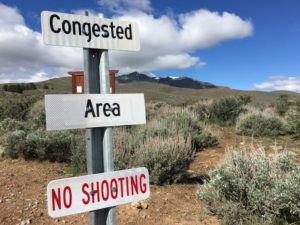 Shooting rules on Peavine Mountain are about to change.

The Washoe Board of County Commissioners is hearing next week the first reading of a new ordinance that will change where shooting is allowed on Peavine.

Concerns have been raised for years about conflicts among hikers, bikers and those shooting firearms on the mountain.

The ordinance as proposed will change the boundaries of congested areas on the mountain. The congested-area map will be expanding to accommodate growth and development, which will reduce areas where shooting is legally allowed.

According to a county staff report, “residential areas within Washoe County, and areas annexed by the cities of Reno and Sparks have grown substantially since the last Firearm Congested Area Boundary adjustment in 2002 and need to be adequately captured.”

“We applaud the efforts of the Board of County Commissioners to make changes to help protect all recreational users on Peavine — responsible hikers, mountain bikers, runners, dirt-bikers, 4x4ers and target shooters need to know where they can practice their sports safely,” he said. “The existing dense, popular network of trails and roads on the southeast flank of Peavine Mountain simply make it unsafe for target shooting with high-powered firearms. We have received a number of stories of hikers, walkers, and runners having close encounters with bullets or shot landing near them or flying overhead. Often the shooters have no line of sight to see the people downrange from them.”

The Nevada Department of Wildlife (NDOW) is proposing exemptions as part of the changes, including allowing hunting with archery equipment more than 1,000 feet of homes and hunting with big game tags more than 5,000 feet from residences. Hunters are required to take hunter safety courses before getting a hunting license or a big-game tag, according to NDOW.

“Aligning the congested area boundary with a recognized geographic feature–the main Peavine service road–will allow everyone to know more easily where the boundaries are,” Ervin said. “The proposal leaves large areas of Peavine Mountain–all of west Peavine and to the north of the service road–open to recreational target shooting.”

Commissioners Jeanne Hermann and Kitty Jung did not respond to requests for comment at the time of publication.

Democrats eye a majority on the Washoe County Commission