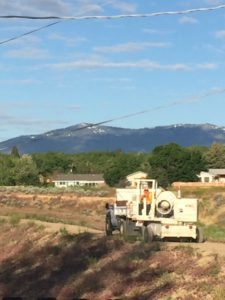 Residents near Keystone Avenue are mad about a recent incident in which the City of Reno was spraying weeds.

Cory Frey says that she was hit in the face with weed killer that the City was spraying near her backyard.

“I was sprayed with a fine mist in the face and on my body,” she said. “The symptoms I experienced after the spraying were, my eyes were stinging–subsequently, I didn’t develop natural tears for about two days in my eyes–a headache came on within about five minutes of exposure, and then (I had) some coughing and respiratory irritation.

“The more I thought about it, the more angry I became because I thought, well how can they be spraying this that back there, because kids are walking to school, people are walking their dogs … this is right behind my house.”

The City said that it was spraying to reduce vegetation and noxious weeds in order to ensure storm water can efficiently drain through its system. Increased moisture this spring has led to more dry weeds, such as cheatgrass, which can clog storm-water grates and drains.

The City’s Director of Public Works, John Flansberg, said that “the place in question is what’s referred to as a high-hazard dam, and the only reason it’s high hazard is because of the amount of water that can fill in there during a storm water event.”

Charles Moses, an environmental scientist with the Nevada Department of Agriculture (NDA), said that the state could end up investigating the city if the citizen files a formal complaint with NDA.

“The products that they’re using are legal products, but we felt like there are some things that they could try to do to avoid these kinds of issues in the future,” Moses said. “This mist blower that they’re using is probably not something that they should be using close to residential areas.”

Flansberg said that the city is taking a look at its practices at the nearly 1,400 locations around the city that it manages.

“It’s not ever our intention to have spray go onto private properties,” he said. “The use of herbicides currently is the most effective method for large-scale weed management, and … I think it’s important for the public to know, we’re using chemicals that you purchase off the shelf at Home Depot or Lowe’s. They’re non-restricted-use chemicals. We’re making sure that nothing that we’re using is overly strong.”

Residents in the meantime would like to see advance notice of weed treatments. They plan to make their concerns known at next week’s Reno City Council Meeting.

Resident Lisa Hill is asking neighbors to show up at the June 8, 2016 meeting.

“At minimum, request public notice as well as the option to post ‘no spray’ signs in front of our houses,” she wrote in an email. “Inquire if the City is using best practices for weed abatement. Request (a) council investigation with a report back to the community.”