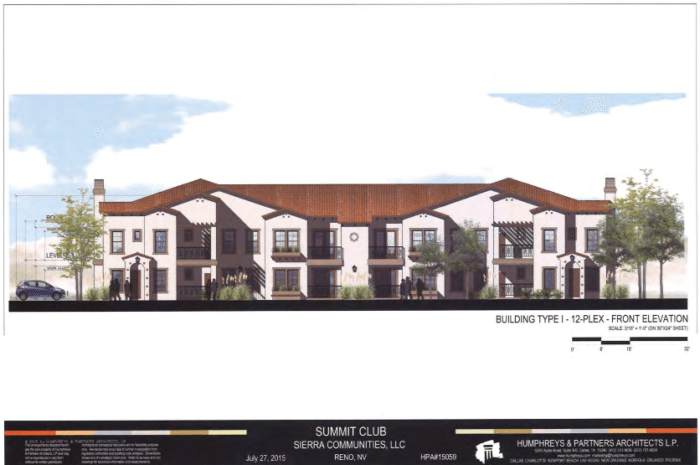 Additional affordable units will be incorporated into the Summit Club apartments and the Reno City Council on Wednesday agreed to allow the Nevada Housing Division to loan the developer $1 million from the state’s low-income housing fund.

The city and Sierra Summit LLC, the apartment’s owner, will negotiate the interest rate and final terms of the loan with approval of the Nevada Housing Division.

When built, the 26-acre site at the northeast corner of U.S. 395 and Mount Rose Highway is expected to house an additional 38 low-income housing units, bring it to a total of 155 out of 584 total units. Needed plan approvals from the city have been granted.

This is an 80/20 project that meets federal guidelines for tax-exempt financing. Eighty percent of units will be rented at market rate and 20 percent will be for tenants earning less than a designated percentage of Washoe County’s adjusted median income, according to Summit Club’s special use permit application.

Councilwoman Naomi Duerr said she thinks the development will be an asset to the area.

“I’m really impressed with the fact that Summit Club is embracing additional affordable units,” Duerr said. “It’s something every developer in town should look at.”

The project is expected to break ground late this year and construction will last about 3 years, Bowlby said.

Plans indicate Summit Club will consist of 2- and 3-story buildings with either 12, 18 or 26 units per building. Units sizes will range from one bedroom and one bathroom to three bedrooms and two bathrooms. A playground and other amenities are also planned.

Summit Club is in the Truckee Meadows Water Authority service area and common area landscape will used reclaimed water, also known as recycled water. Sewer is already on site and fees will be deferred for affordable units.

The Summit Club site was initially planned as the second phase of The Summit shopping center, which isn’t affiliated with the apartments. Sierra Summit LLC bought the vacant property west of the shopping center for $9 million in fall 2015 from Redus Reno LLC, a division of Wells Fargo Bank.