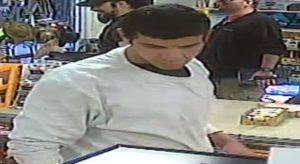 Washoe County Sheriff’s Office Detectives are asking for the public’s help with identifying a possible suspect in the theft of a pick-up truck from the Hidden Valley area on May 22 or 23, 2016.

The suspect is described as a younger Hispanic male with short, thin dark hair. Investigators believe he may be responsible for additional crimes in the area.

The stolen vehicle is described as a gray 2012 Nissan Titan, with Nevada license plate number 066 LGD.

Early in the morning of May 23, the suspect used a credit card related to the stolen vehicle at a 7-Eleven store in Reno. Investigators were able to obtain surveillance photos of the suspect from the store. Those photos are attached to this press release.

Anyone with information about the suspect in this investigation is asked to contact the Washoe County Sheriff’s Office Detective Division at (775) 328-3320 or Secret Witness at (775) 322-4900.