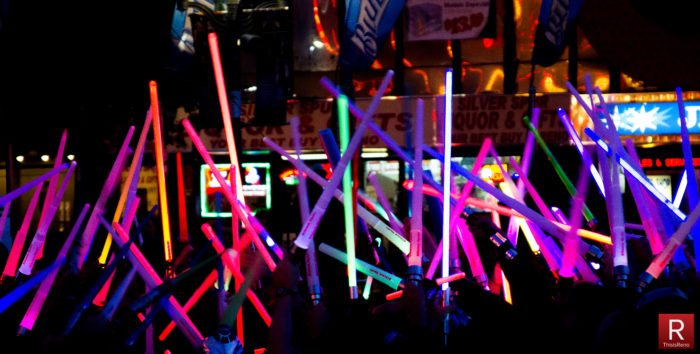 Jedis, Sith Lords and cosplayers from all realms of fandom took part in the first ever Epic Crawl in downtown Reno on Saturday.

An estimated 1,500 crawlers gathered in Harrah’s plaza at approximately 8 p.m. to start the festivities with a lightsaber battle of epic proportions. Attendees were asked to join either the light or the dark side before coming together in the center for a mock battle. After the “fighting” subsided, a custom-made, red carbon fiber lightsaber was raffled off to one lucky crawler.

“I love it,” said Desiree Tillery, winner of the lightsaber give-away. “Oh my goodness, I never won anything like this before. It’s just been great, this whole night was fantastic.”

Tillery ran on stage with tears in her eyes as her name was called as the raffle winner.

“This is my first crawl, and I plan to join as many other crawls as possible,” Tillery said. “The crawls give people an opportunity to cosplay, a chance to show off a little bit of difference in who you are. It gives you a chance to be yourself, especially for people who have full-time jobs who can’t always do things like this whenever they want.”

“I truly feel like the god of war,” said 23-year-old Nathan Koteras, who attends most crawls dressed like the character Kratos from the video game, God of War. “Over the years my identity to everyone has become the god of war and I am of Greek descent, so to become Kratos is like an ultimate feeling of unity with my past and what I am.”

Many in the crowd dispersed to the participating bars in the downtown area after the lightsaber battle seeking shelter from the cold temperatures and winds.

“Despite the cold weather, we appreciate everyone coming out and making it a successful first year event,” said crawl organizer Ed Adkins. “Also, join us for our Superhero 5k Run in three weeks on June 11 in downtown Reno.”