OPINION: It’s great to celebrate the future, just don’t dismiss the past

By ThisIsReno May 31, 2016
Image: Youtube screen grab of The Mapes implosion by MarkOneHD.

By Jen A. Huntley

It may have rained on the City of Reno’s dedication of the art plaza Wednesday, but that didn’t dampen the enthusiasm of everyone who came out to celebrate the reinvention of Mapes plaza into Reno’s Art plaza. It was great to see the gorgeous BELIEVE installation reflected in the saturated concrete, and to appreciate the sense of place articulated by the Tutto Ferro topographic friezes adorning the new access to the Truckee River. I, for one, am a fan of the art, and I appreciate the connections made by David Bobzien and other speakers who articulated the power of art to foster an awareness of, and emotional connection to, place by the people who inhabit it.

But sense of place is not only an expression of space, as the topographies suggest, it is also an expression of time and memory. In the case of the art plaza, the story–more specifically, the history–of that place is just as vital to Reno’s sense of self as the contemporary art that now graces it. It saddens me that in all the public talk of art’s role in moving the city forward, not one of our public leaders chose to reflect on the art of Reno’s past.

Many important events in our history took place in that very spot, as historian Alicia Barber has argued in her book Reno’s Big Gamble. But the famous landmark of the Mapes Hotel, is noteworthy for its very strong connection to Reno’s own art history. It was also a glaring absence, not only in the open space made possible by the building’s destruction only 16 years ago, but in its complete erasure from our public memory, either in the talks that celebrated the plaza last Wednesday, or in the artwork and interpretation around it. That is unfortunate, because the Mapes has much to teach us about ourselves.

The glory of the Mapes in its heyday (1947 through the 1970‘s) reminds us that Reno has actually been on the cutting edge of art worlds before. The Mapes was home to the cast and crew of the strange and wonderful film the Misfits, and the Mapes showcased some of midcentury America’s most popular musical entertainers, including Frank Sinatra and Sammy Davis Jr. 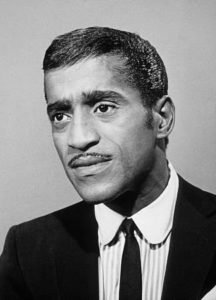 Of course, Sammy Davis, Jr. couldn’t stay in the Mapes, because it, like most of the rest of Reno and the state of Nevada, enforced racial segregation–a piece of our history that we would like to forget as we rush forward into our shiny future–but nevertheless was a powerful reality that echoes into our present. The Mapes hosted President Truman and was also the site where Senator Joseph McCarthy revealed to a reporter that he never had a list of “known communists”–a reminder of Reno’s connection to power brokers and events that defined America’s identity, not just Nevada’s.

The art plaza itself was made possible by a bitterly contested decision to destroy the Mapes Casino-Hotel only sixteen years ago. Reno earned the dubious distinction of being America’s first city in history to raze a building listed on the National Historic Register’s annual Most Endangered list. And while I appreciate the open views now possible from the City of Reno building, and the new access to the river made possible by the reshaping of the plaza, I have to confess that I have been somewhat underwhelmed by the expanse of concrete that replaced the Mapes, a decidedly unimaginative replacement for such a significant architectural testimony to Reno’s (and Nevada’s, and America’s) history.

The Mapes’ demise was not the only time that we Renoites have decided to swap the old and historic for…. nothing, basically. The wide expanse of empty and derelict lots that DJ Clark’s Second Street Project hopes to rehabilitate were once a collection of urban farms and Victorian houses. Many will remember the Parklane Mall where weeds grow through cracks in the cement now, but was also torn down for Max Behr’s would-be Beverly Hillbillies-themed casino, victim (or was it the silver lining?) of the 2008 recession. In my residential neighborhood, a weed-filled pit generates dust for us to inhale where I’m told a park-like home for the elderly once stood, and so it goes. It is nice to see that some of these places are now slated for New Urban mixed-use development, but it seems such a waste that they had to remain empty for so long. As if we Renoans would prefer to stare at an empty lot than be reminded of our checkered, but rich and interesting, past.

The tale of the Mapes, and the wider fraught state of Reno’s historic architecture, is a tougher story to tell than the celebration of a hopeful future, because it necessarily points out the shadows cast by our sunny city in the west. The missteps, the short-sighted decisions, the prejudices, and the high-handed dismissal of citizen concerns can’t be so easily glossed over when we shift our gaze from the tangible present to conjure up the ghosts of our past. Such are the features of ANY genuine history, and yet, a community gains depth and authenticity when it chooses to embrace and come to terms with its origins–however conflicted and messy those may be. To elide the past leads only to superficial and fleeting comfort at the expense of true growth, as any good therapist will tell you–this is every bit as true of the collective psyche as it is of our individual ones.

The recent story of the Mapes’ destruction, and that of the original Virginia Street Bridge adjacent to it, also lacks a clear, universally-accepted moral for our community. Were these merely derelict structures that needed to be sacrificed to make way for the shiny future (which is our present moment)? Or, were they precious and unique testimonials to our complex civic identity, now lost forever despite impassioned citizen protest? Or is it some complex admixture of both? As an historian and preservationist, I occupy the latter camp, but I can still appreciate the aesthetic contribution to walkability of the new bridge and admire the tactile beauty of the Plaza’s installations. Despite the difficulty in summing up a messy past for laudatory soundbites and promotional speeches, I believe that history’s ambivalence is actually its core value–in generating questions, discussion, cautionary tales and reflection, a community’s engagement with its own history provides fertile territory for the seeds of visionary and vibrant urban planning to take root.

Jen A. Huntley is an environmental historian of the Sierra Nevada and Pacific Rim. She taught humanities and history courses for ten years at the University of Nevada, Reno and is on faculty at Truckee Meadows Community College.