The Nevada Sagebrush published yesterday the accounts of Andres Meza and Jacob Finn, the two who were arrested last week after an altercation with the Reno Police Department (RPD).

In it, they said that they did have an altercation with a 58-year-old, who reportedly notified police of the incident, claiming to be assaulted.

According the Sagebrush article by Blake Nelson, Finn and Meza had been drinking at a bar but said it was self defense:

(They) claim that minutes after they left the Foxy Olive, they were crossing through the parking lot of the apartment complex at 264 Mill Street when they were approached by the 58-year-old man in question. 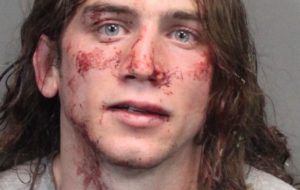 Both Meza and Finn describe the event with the 58-year-old, who was unable to be reached at the time of this story, as being the one who brandished the hammer and intended to fight them. The two then wrestled the hammer away from the man and proceeded to subdue him.

“I choked him out and then put him on the ground and hit him,” said Finn, “I hit him once, but he was fine. He was on his knees and conscious.”

Both claim inconsistencies with the original RPD information published by the Washoe County Sheriff’s Office.

They claim that they then left the parking lot of the apartment complex, where the fight took place, not on the 200 block of Ryland as the police press release states.

After returning to Meza’s home on Ryland Street, the two reportedly only had moments to process the fight that had just occurred when the police arrived.

“We were just like ‘what just happened?’” said Finn. “Then next thing you know we’re surrounded by lights and police cars.”

From there, the accounts seem to support and differ from what the WCSO reported to media.

“[Meza] starts going into his house,” said Finn, “And then the cop grabs me, and I turned around and said ‘I’m not resisting.’”

The police press release states that Finn was uncooperative, and his statements seems to corroborate this. But the report says that Meza charged the police with a hammer.

According to Meza, the police attacked him while he was recording the altercation with his phone between one of the officers and Finn.

Meza said he started recording, trying to tell Finn — calling him Tarzan — to come inside while he’s scuffling with an RPD office.

“I pulled out my phone and started recording,” said Meza, “I was telling [Finn] to come inside, which was a terrible idea, because he was being arrested. Then the second cop pulls up and runs straight for me. I assumed that because I was inside the house that they couldn’t come in because they didn’t have a warrant and I was never told that I was under arrest. He slammed on the door and I pressed on the door to keep him out, but the second time he slammed right through me and hit me with his baton.”

During the altercation, Meza says that he was does not remember having a hammer in his hands and definitely didn’t charge the police.

He also said that he did not recall being Tasered, as reported by police.

“I feel as if I was unconscious and they tased an unconscious body,” Meza told the Sagebrush.

WCSO Lt. Tom Green told ThisisReno this week that the WCSO is dropping its investigation against RPD because Meza’s injuries were not life threatening.

About the inconsistencies in the eye-witness and RPD information, Green said: “In hindsight, we were too premature with the press release. It created more questions than answers.”

He also said that a hammer used in the altercation with police was retrieved from the home and entered into evidence.