Federal grants for housing, that will provide an additional 387 affordable rental units to the area in the next year and help operate the homeless center, were allocated and accepted Wednesday by the Reno City Council.

Community development block grant money from the U.S. Department of Housing and Urban Development totaling almost $2.9 million will be spent improving pedestrian areas along North Center Street, along with fencing for Pat Baker Park in northeast Reno, rehabilitation of nonprofit housing and repairs to the Evelyn Mount Northeast Community Center on Valley Road.

The Community Assistance Center on Record Street will get 26 percent of block grant funds, the same percentage as last year, for operational costs.

Applications from properties were reviewed by a Washoe County HOME Consortium committee earlier this year and were recommended for approval.

ACTIONN, an acronym for Acting in Community Together in Organizing Northern Nevada, and the Reno Initiative for Shelter & Equality (RISE), told council members some of the HUD funds should go toward relocating people being displaced by The Standard at Reno. 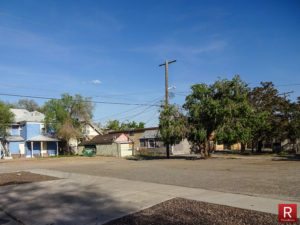 Homes near Lake Street that will be replaced with student housing.

Located in the area off North Center and North Lake streets near their junctions with East Sixth and East Seventh streets, The Standard is a private housing project being geared toward University of Nevada, Reno students.

Councilwoman Neoma Jardon noted the city isn’t subsidizing The Standard and doesn’t have the authority to intervene in private transactions, although it can try and “connect the dots and help out where it can.”

Colling said she understands the city isn’t writing checks to developers but most people don’t understand the bureaucracy that goes on in the public and private sectors.

“Everything we do with money, because it’s federal money, has limitations and rules,” said Bill Thomas, assistant city manger.

The city’s current Annual Action Plan for allocating HUD grants expires June 30 and a new annual plan must be submitted to the U.S. Department of Housing and Urban Development by May 15 to avoid delay in receiving funds.

It was approved with a 5-0 vote. Council members Naomi Duerr and Paul McKenzie were absent.