The Washoe Board of County Commissions will consider Tuesday approval of more than $100,000 worth of military surplus equipment being donated to the Washoe County Sheriff’s Office (WCSO).

Concerns about the federal program, which has given everything from grenade launchers and military vehicles to local law enforcement, were raised nationally in reporting by Radley Balko, whose book “Rise of the Warrior Cop: The Militarization of America’s Police Forces,” helped bring to light questions about the use of military gear supplied to local law enforcement.

Its 2015 list of equipment shows similar rescue and safety gear with the exception of a lone bayonet, which was designated for use by the WCSO Detention Response Team. The team, according to the WCSO, “was formed in 1988 in order to provide a specially trained team capable of quelling disturbances in the jail, extricating combative inmates and providing transportation for high security inmates.”

The equipment will be used “to support (the) DRT, K9 Units, RAVEN, Special Weapons and Tactics (SWAT) unit and Search and Rescue of WCSO,” according to the county. 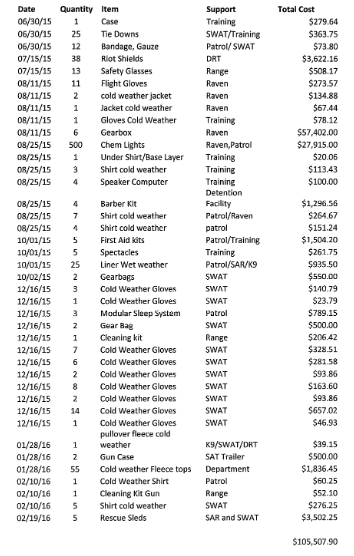