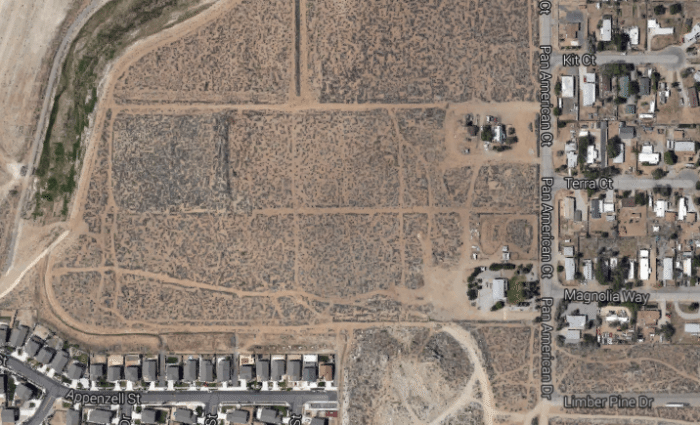 Two parcels totaling 20 acres in the North Valleys were approved Wednesday for annexation into the city, along with a zoning change, by the Reno City Council at the request of the property owners.

The properties at 9325 and 9355 Pan American Way, west of the street’s intersection of Terra Court, currently have one house on each parcel and was zoned for mixed-use residential, but it was switched to single family residential. Both are owned by Cleveland and Doris Pipkin.

City staff told council members the properties met the annexation criteria, including that for planned water and sewer use. Reno’s sanitary sewer interceptor is located south of the site. The city and Washoe County are working on a joint wastewater facilities plan for the North Valleys.

No correspondence was received by the city and nobody showed up to comment. It passed 6-0. Councilwoman Naomi Duerr was absent.

“The Truckee Meadows Water Authority has started construction of the Vidler pipeline extension along Lemmon Drive near the properties proposed for annexation to its current system on North Virginia Street,” a report to the Council said. “This extension will be capable of serving the water needs of future development and the subject site abuts existing TMWA service areas to the south and west.”

The following are from the city of Reno

An agreement was approved with EKAY Economic Consultants for a $11,900 study to determine the feasibility of a ice rink for a minor league hockey team at the Reno Events Center. Funds for the study would come from the Capital Projects Room Tax Surcharge.

An ordinance amending the Reno Municipal Code that deals with public peace, safety and morals in area parks was approved.

An ordinance was passed that amends electrical certificate requirements for people employed in relevant trades.

An interlocal cooperative agreement between the city and Regional Transportation Commission was approved for the upcoming fiscal year, including RTC’s program of projects.