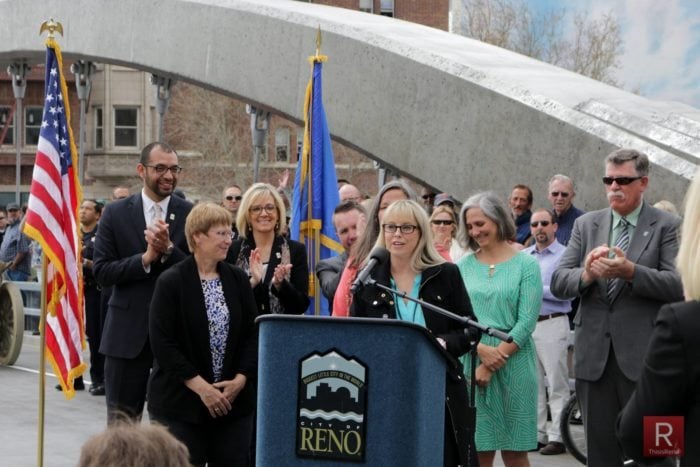 The public gathered Tuesday in downtown Reno to celebrate the completion of the new Virginia Street Bridge, which had been under construction and closed to traffic since last summer.

Festivities at the corner of First and Virginia streets by the Truckee River included a ceremony with local dignitaries, a procession of vehicles from the National Automobile Museum, two Tesla cars, a mule team and the University of Nevada, Reno’s Tuba Ensemble, cheerleaders and mascots Alphie and Wolfie Jr. The Reno Wind Symphony also performed.

Pedestrians walked the bridge and admired the features, including the mega-wide walkways on both sides. The bridge is scheduled to open to motorists late Tuesday or early Wednesday.

City Plaza, located south of City Hall on the northeast side of the bridge, also re-opened. Topographic art depicting the region is now in the river access area, along with access to the Truckee River from City Plaza.

“This project improves flood capacity, as well as walkability for residents and visitors alike,” City Manager Andrew Clinger said. “We have a natural jewel running through downtown Reno and now we can enjoy it more.” 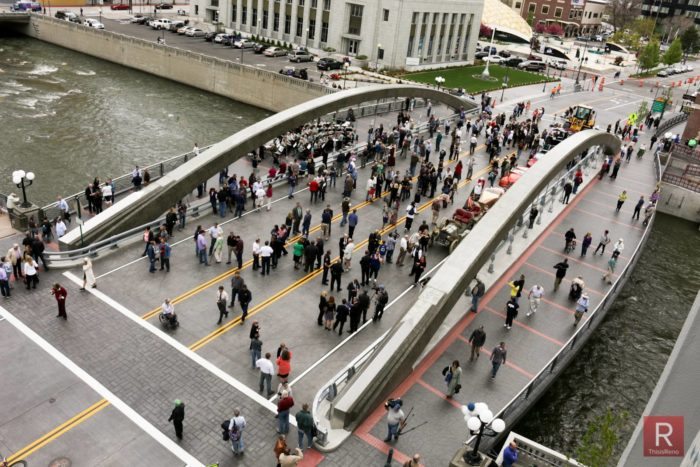 Beverley Van Dusseldorp, owner of the Antique Angel Wedding Chapel, said her business sometimes looked invisible during the bridge construction and it struggled as a result. But the bridge completion is a welcome relief.

“We are delighted and we are over the moon,” Van Dusseldorp said. “We’ve been waiting a long time.”

Built in 1905, the original Virginia Street Bridge rose to stardom as Reno became known as the divorce capital of the world. People reportedly left the Washoe County Courthouse after receiving their divorce decree and cast their wedding rings over the railing of the bridge into the river. This scene was played out in movies filmed locally: “Reno” (1939, RKO Radio Pictures) and “The Misfits” (1961, Seven Arts Productions for United Artists).

Prior to then, there was a wooden bridge built in 1859, said Phil Earl, former curator at the Nevada Historical Society. Shortly thereafter, the wood bridge was rebuilt and eventually replaced in 1877 with an iron bridge until 1905.

“In 1891, Reno’s only lynching took place on the bridge,” said Earl, referring to Luis Ortiz, who was lynched for shooting Reno night constable Richard Nash. “There were stories later on that Ortiz’s ghost haunted that bridge.”

Earl said some real wedding rings had been found in the Truckee River but often people would go to Woolworths to purchase something inexpensive to toss in the river.

In 1980, the bridge got listed on the National Register of Historic Places. However, in recent years it became an impediment to flood conveyance and its poor condition became a safety problem. The new bridge’s replacement structure eliminates the center pier, bettering flood capacity and reducing potential for debris to hang up during high water.

With efforts to preserve as much from the past as possible, the historic lighting structures and rails were refurbished and reinstalled in the area. Old plaques were also reinstalled. Additionally, an interpretive area with panels that point out the former bridges’ structures and the importance of flood walls is located on the bridge’s southeast corner.

The $18.3 million project began in June 2015 and local contractor Q&D Construction finished it about a month ahead of schedule. Jacobs Engineering Group of Las Vegas engineered the project and Frederick Gottemoeller of Bridgescape in Columbia, Md. was the architect.

“Lets look at being prudent in planning what we do with the other bridges,” Dianda said, noting several downtown bridges are aging and that designs and architecture had already been paid for. He suggested they be identical to the new bridge.

Councilwoman Naomi Duerr said there are plans to eventually replace the bridges on Center, Lake and Sierra streets when money allows.

“It’s part of the flood project, for sure,” Duerr said. 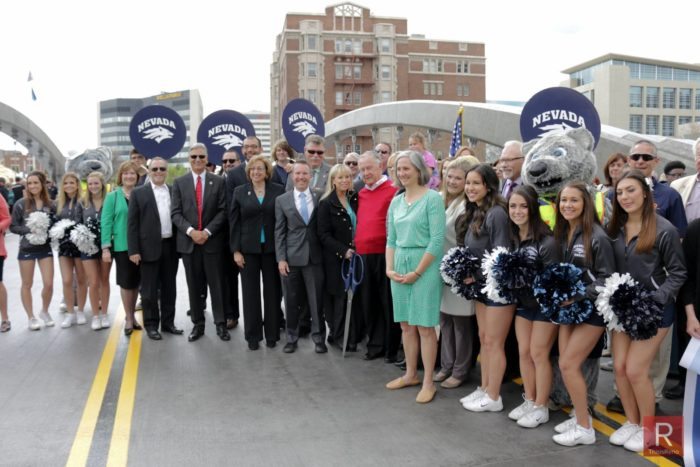