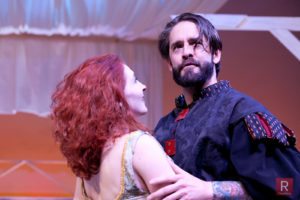 Fortinbras debuted this weekend at Reno Little Theater. Watch the video below for audience reactions.

The show’s synopsis: Young Fortinbras, a modern man of action, enters during the last scene of Hamlet only to order the bodies of the royal family shuffled off while he devises the best possible media blitz to legitimize his ascension to the throne of Denmark.

Horatio, sworn to the dead Hamlet to convey the truth of his actions, is immediately cast by Fortinbras into the role of an unwilling public relations person.

Meanwhile, Fortinbras is forced to balance a disastrous and mistaken invasion of Poland with a seductive and harrowing array of ghosts, ranging from a vampish Ophelia to a repentant Claudius and Gertrude, all of whom cast doubts in his mind as to what really makes up the character of a ruler.

Five events to check out this week: The ‘it’s getting...