Upgrades to Events Center To Be Showcased Tonight 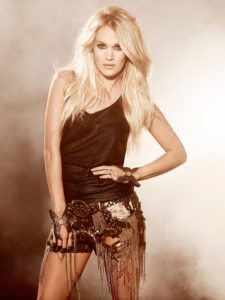 Carrie Underwood fans will be the first to see the recent improvements made to the Reno Events Center, and local officials expect the facility to attract more prominent performers in the future.

The country music singer, songwriter and actress is scheduled to perform at the events center, 400 North Center Street, tonight (April 8) as part of her “The Storyteller Tour.”

The event center’s new steel rigging was finished recently and was funded from the $2 capital projects room tax surcharge. The project provides the venue with additional structural steel to extend the rigging above the floor’s middle. Prior rigging that supported the stage’s audio, visual and lighting extended one-third the distance from the north wall towards the center.

Local tourism officials are hoping this will draw other entertainers that would prefer to set up in the center of the arena, such as boxing and mixed martial arts events.

“Having Carrie Underwood here is huge,” Councilman David Bobzien said. “This makes us more attractive on a national scale. The joke was always, “How good is the entertainment in Reno?’”

“All entertainers take notice when Carrie Underwood sells out in 30 minutes,” Carano said in a statement. “This is great for our destination brand and for residents who appreciate quality entertainment. If not for these enhancements, we would not be able to bring these A-list entertainers to the Biggest Little City.”

Reno Ironworks did the $298,000 project. The city established a fund in fiscal year 2012 that collects an additional $2 per night on properties with non-restricted gaming licenses in downtown and within a mile of downtown. In 2011, state lawmakers authorized municipalities to set up such a fund.

The fund is also responsible for upgrades at the Reno-Sparks Livestock Events Center and National Bowling Stadium.

A subcommittee recommends expenditures of the capital projects surcharge to the City Council, which must be approved by a two-thirds vote. Three Reno council members and three members of the public make up the committee, which meets every other month. Bobzien and Carano are on that committee.