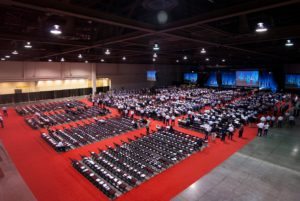 A New York-based search firm will be tasked with helping the Reno-Sparks Convention and Visitors Authority find its next chief executive officer.

The board voted 6-0 Thursday to hire the Lapham Group Inc. over Washington, D.C.-based Boyden. Latham’s presentation was April 22 and Boyden’s was Thursday.

Board member Bill Wood, general manager at Crystal Bay Casino, abstained from voting because he didn’t hear the Lapham presentation. Reno Mayor and RSCVA board member Hillary Schieve was absent.

Lapham indicated in a letter to the RSCVA board that its fee is one-third of the successful candidate’s first year cash compensation and that the minimum fee for search engagement is $100,000.

Citing vague reasons, the board terminated former CEO Chris Baum’s contract in October 2015. Baum had been with the RSCVA almost 4 years and had received a 3-year contract extension just 8 months prior.

John Kaatz, a partner at the Conventions, Sports & Leisure International firm, told the board it ought to consider looking outside the box. He cited two examples: New Orleans Convention & Visitors Bureau CEO J. Stephen Perry was the prior chief of staff to the Louisiana governor and Greater Miami CVB’s CEO Bill Talbert came out of municipal government.

“You’ve burned through six CEOs, so it will be hard to get someone from the CVB industry,” Kaatz said.

Board member Tony Mavrides, a Circus Circus Reno executive, said it’s important to “preserve the confidentially of potential candidates who might be currently employed.”

RSCVA attorney Ben Kennedy cautioned the board about the open meeting law and making names known too early.

“When names are disclosed to this board, they are public record,” Kennedy said.

Before departing, Boyden managing partner Tim McNamara gave the board some advice.

“The last few times I was in Reno, I’ve taken five or six cabs from the airport to somewhere else and I’ve asked the cab drivers about the convention business,” McNamara said. The drivers mentioned crumbling buildings and the Reno-Sparks Convention Center being too small. McNamara noted taxicab drivers are often the first people visitors meet and the drivers should be educated about what’s going on in the community.

“If your plans are to grow the convention center, they need to know,” McNamara said.

Board Chairman Bob Lucy, a Washoe County commissioner, said Lapham plans to bring a list of candidates to the board is the next 2 to 3 months.