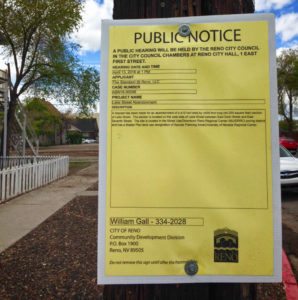 The Reno City Council today approved the abandonment of a portion of Lake Street, which will be part of a project expected to provide a connection between the the University of Nevada, Reno and downtown.

Approved by a 5-1 vote, the road abandonment is compromised of a 10-foot wide by 400-foot long section on Lake Street between East Sixth and East Seventh streets.

Councilwoman Jenny Brekhus dissented, saying it would be an “urban design error to disrupt Lake Street because it still has value.” Councilman Paul McKenzie was absent but posted a message Wednesday on a Facebook page, indicating there’s more to the project that what the Council is being advised.

The Standard at Reno plans to use Lake Street as part of land assembly for its project, which will be private, off-campus housing for UNR students. An attached parking structure is also planned.

Opposition at the Council meeting was more about the proposed project than it was about the vote on the 4,000 square foot strip of land.

Members of ACTIONN, an acronym for Acting in Community Together in Organizing Northern Nevada, expressed their concerns about project logistics to council members.

ACTIONN executive director Mike Thornton said the city should make sure the developer purchases building materials for the project locally and that the developer hire local workers and pay them a fair wage.

Another ACTIONN leader, Betty Bishop, said many people living in the area are disabled, elderly or don’t have reliable transportation and would struggle to move on their own by the end of June.

“Look very closely at this redevelopment project and make sure we’re not indifferent to these people,” Bishop said. “They need to be taken care of.”

Land owner Marty Guidici acknowledged some of his tenants need help moving, and he’s been willing to use trucks and laborers to help. He’s been researching other available units in the area and sharing them with his tenants. Many have already moved.

“Most of them, because of our approach, have been very understanding about it because we started early,” Guidici said.

Assistant City Manager Bill Thomas fielded questions from council members about the Lake Street strip. He said abandoning the strip would not cause public harm and that it would be un-developable if it were its own parcel.

Other parcels related to this project have been before the City Council recently. Council members in March approved a 20-foot by 400-foot long alleyway abandonment between East Sixth and Seventh streets is 180 feet east of the North Center Street-East Sixth Street interchange.