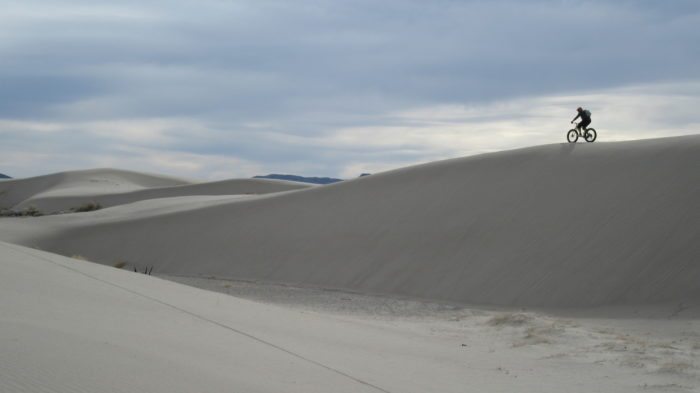 Leaving Fernley, we entered a stretch known in the pioneer days as the 40 Mile Desert. It was the most dreaded section of the California Emigrant Trail, often having to be crossed in the heat of summer to leave enough time for a snow-free Sierra Nevada crossing. Dehydration and starvation stalked every mile for both man and beast, as they tried to make it from the Humboldt River to either the Truckee or Carson Rivers. A survey made in 1850 tallied these grim totals: 1,061 dead mules, almost 5,000 horses, 3,750 cattle, and 953 pioneer graves. 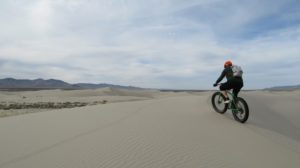 Today, though, with its 75 MPH speed limit, Interstate 80 gets travelers through this area with far fewer hardships. The most severe suffering we encountered, slight boredom, was alleviated with an upbeat country road song.

I was totin’ my pack along the dusty Winnemucca road
When along came a semi with a high and canvas covered load
“If you’re going to Winnemucca, Mack, with me you can ride”
So I climbed into the cab and then I settled down inside
He asked me if I’d seen a road with so much dust and sand
And I said, “Listen, bud, I’ve traveled every road in this here land”

Once a small station on the Humboldt River along the Transcontinental Railroad, Winnemucca has grown to a population of around 8,000 people. It’s a nice looking historical town with several amenities including a full service Bike Shop. We stopped at Bikes and More (www.winnemuccabikeshop.com) to chat with owner Chuck Austin and check out the shop. Chuck has a wealth of information on the local trails and dunes, and has all the items you need that you may have forgotten or need replacing after a day out on the trails.

After getting the info on where to ride and camp, we headed north on HWY 95 to Sand Pass Road, a little over 10 miles north of Winnemucca. Along the way, we got our first glimpse of the dunes where they come right down to the highway. There is RV camping here (no services) for people with OHVs, but those looking for more solitude need to drive just a bit further. Now off the Highway, we followed the well graded Sand Pass Road west over the Bloody Run Hills to Silver State Valley. 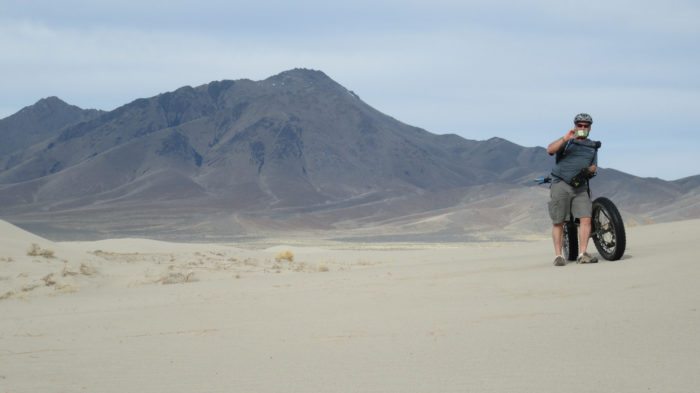 The bulk of the Winnemucca Sand Dunes are in the Silver State Valley, and while less than 100 feet (30 m) tall, the dunes span an area of approximately 40 miles (64 km) from east to west. The dunes themselves are divided into smaller ranges, separated by short sections of desert brush and grasses.

We turned off onto a dune access road southwest of Bloody Run Peak, selecting a well used campsite far enough away from the dunes so we wouldn’t get our vehicles stuck. Visitors to the dunes should be careful not to drive over any blackened areas from previous campfires, as there are numerous nails buried in the sand. Thankfully, we figured this out in time!

Eager to get on the bikes after several hours of driving, we quickly got ready and headed over to the closest set of dunes to the southeast. As Chuck at the bike shop had told us, these particular dunes are steep and soft, and proved to be fairly difficult to ride. Heeding his advice, we made our way west to the next set of dunes.

Once at our new destination, we found what we were looking for. Although the dunes were pretty dry from a few weeks without substantial rain, our fat bike tires were staying up on top of the sand. We adjusted the tire pressure as low as we could go for maximum flotation, with pressures as low as 5 PSI. 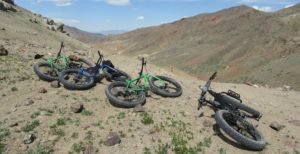 Once out on the dunes, there are endless route possibilities. We often went off in our own directions to investigate terrain features that caught our eyes. I was surprised at the climbs we could do down in the granny gear. Crawling up the tallest dunes, breaking over the top for fun descents down the other side, and then doing it all over again. Other times we’d stick to the ridges for as long as we could. All of it was pretty exhausting, though, so there were frequent breaks to sit on the dunes and enjoy the scenery. OHVs share the area, but there is so much open space out there, that we rarely crossed paths.

Although it had felt like we’d ridden a great distance with our random wandering, we were never too far from camp. It was a fact that we could verify by gauging the distance of a big white RV parked near our camp. It never seemed to get much further away no matter where we were. As much fun as were were having, though, our interests eventually turned to camp, thinking of the awaiting food and cold beverages.

We ended up getting back to camp at a good time. We setup the tents, cooked dinner, then settled in by the campfire to enjoy a beautiful Winnemucca sunset. We stayed up late until we ran out of firewood, and then we retreated quickly to the tents. As warm as the day was, it was still the last night of winter, and the night cooled off rapidly. Although we stayed warm, it was the type of night where you wanted the sleeping bag to cover every part of your body except your nose. 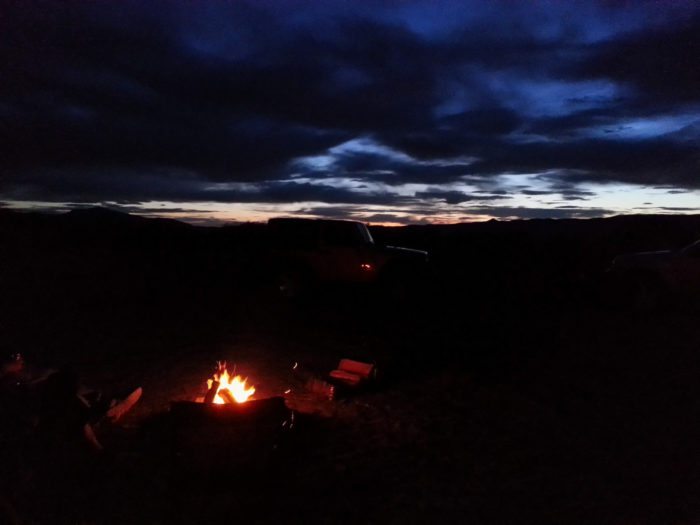 I awoke blurry eyed the next morning to one of my camp mates seated by the now dormant campfire. Unable to distinguish which one, I knew it was time to get the coffee started. After a good breakfast, we headed out for some more riding.

More familiar with the layout of the land now, we were able to quickly get to the best riding. We wanted to get further back into the dunes this time. Once we thought we were into some new territory, we’d come across our tracks from the previous day. We continued to push west until nothing look familiar. 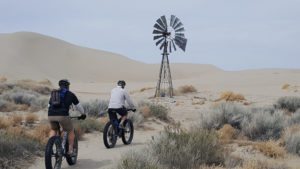 Eventually we stumbled upon a windmill, a landmark that I had seen in other people’s photos but had no idea where it was. I had assumed it was on the outskirts of the valley, but here it was, right in the middle of the dunes. Apparently there are a few windmills in the area, some still in use, that bring water to the surface for cattle operations. This particular windmill creaked and spun in the wind a couple times, but the rest of the parts to collect the water are now gone.

After a good rest at the windmill, we agreed that we were wiped out and it was time to start heading home to Carson City. We followed the windmill road to the east, thinking it would be the easiest way back. What we found, though, is that anything an OHV had previously been on was a lot harder to pedal due to the sand being churned up. The easiest way to travel in the valley is by undisturbed dune, and preferably the dunes with the ripples in the sand. The ripples indicate the firmest surface to ride on. Not knowing how the road would be, though, we pressed on through it and pedaled into camp on empty. Talk now turned to heading back to Winneumucca for the biggest burgers we could find!

The Winnemucca Dunes are a great fat bike destination, but that window may be closing going into summer. Not only will it be really hot out there, the dunes will become much harder to ride as they continue to dry out and soften. The best time to ride the dunes is after a healthy dose of precipitation. If you can time it right, and factor in the 3 hour one way drive to Winneumucca, you just might get a good ride! There’s more to ride in Winnemucca than just dunes, though. There’s the Bloody Shins Trail, for example. With a little research and some help from Bikes and More, you can put together a fun mountain bike weekend! 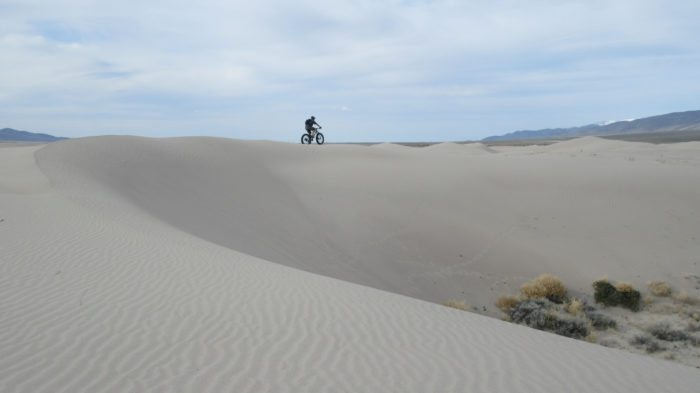 Jeff Moser is proprietor of BikeCarson.com, which covers bicycle news, culture, and lifestyle in Carson City, Nevada. Carson City is at the base of the Eastern Sierras, creating a wide variety of cycling opportunities.