By Bob Conrad April 22, 2016
Evans Park, across from UNR, is known for its horsehoe pits. It encompasses the Sigma Alpha Epsilon fraternity house. 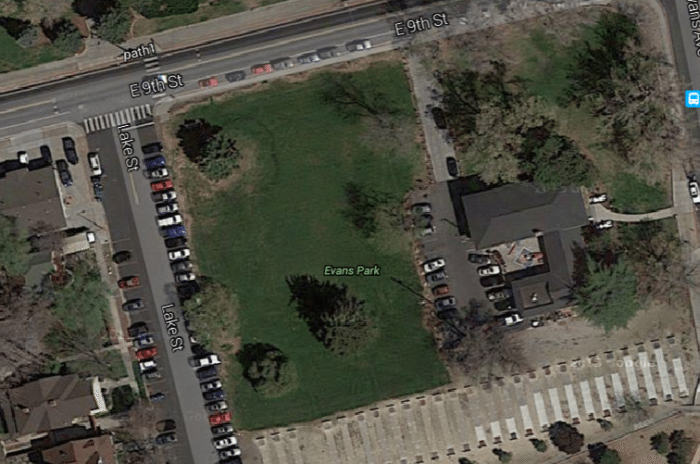 Evans Park, across from UNR, is known for its horsehoe pits that border I-80. It encompasses the Sigma Alpha Epsilon fraternity house. Image: Google Maps.

The City of Reno’s Recreation and Parks Commission voted on April 5, 2016 to recommend that the city maintain ownership of Evans Park across from the University of Nevada, Reno.

This despite a draft policy from the City that said, “The City should consider transferring Evans Park to the University of Nevada, Reno within the context of promoting the Gateway Precinct concept.”

According to the City, “this nonbinding policy was suggested to promote incorporation of the park into the overall University Campus Gateway design and the institutional uses anticipated to be built around it. Adoption of the policy language would not commit the City to any particular action, and transfer of ownership would require a separate Council action with additional stipulations possible.”

The parks commission, however, voted for a statement “…that the City of Reno maintain ownership of Evans Park and continue its good working relationship with the University.”

The two-plus-acre park was donated to the City in 1929. The original intent was to assign the property “forever for park purposes.”

UNR wants to develop areas south of campus for new buildings. It’s not clear from UNR’s master plan what the university intends for the Evans Park area.

The City Council may consider siding with its parks commission by keeping it a city park, or it can take further action by considering to transfer ownership to UNR.

The city is also going to consider new language to its master plan that will increase consideration for the preservation of historic resources in the UNR gateway area, an issue that has drawn community concern about UNR potentially removing the homes from Center Street for campus development.

What do you think?

Comment below or contact your councilmember to express your opinion. Comments may be sent to the City Clerk: http://www.reno.gov/government/departments/city-clerk