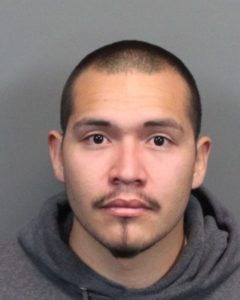 Reno Police (RPD) said today that they became aware on April 3, 2016 of an alleged kidnapping and sexual assault.

According to RPD, a female was picked-up downtown by a male suspect. He allegedly drove her to a secluded area.

“The victim became scared and attempted to flee, but was choked from behind and awoke to the male pointing a handgun and telling her to undress,” police said. “They continued to drive, until the suspect stopped the vehicle at a convenience store located in the Sun Valley area. The suspect entered the store and the victim was able to escape and asked for help at a nearby casino.”

“Officers became aware of a similar case where the suspect had the same description. In the most recent case, the victim was picked up in the area of Fourth and Ralston streets and driven to a remote location north of Golden Valley,” police said. “Once at this location the suspect sexually assaulted the victim and dropped her off on a nearby road where she was located by a passerby and who took her for help.”

Upon continued investigation it was determined that the Suspect is identified as: Calderon-Morales, David 08/09/1996 of Sun Valley.  Calderon was transported to the Washoe County Jail where he was booked for 1st Degree kidnapping,(X2) Battery by Strangulation, Battery with attempt to commit a sexual assault, Assault with a Deadly Weapon (X2), False Imprisonment (X2) and sexual assault. He is currently being held with no bail.

Anyone having any information about this case or similar cases are asked to please contact the Reno Police Department at 334-2188, Secret Witness at 322-4900, www.secretwitness.com, or text the tip to 847411 (TIP 411) keyword – SW