The groups are concerned with horse overpopulation on Nevada’s public lands.

“Wild horse populations in Nevada have skyrocketed to levels unsustainable for the ecology of Nevada’s rangelands and are also impacting sage grouse habitat, horse health and the livelihood of Nevada’s ranching operations, many of which have been in operation for generations,” the groups said in a statement. “The horse populations continue to increase exponentially each year.”

Sandoval said earlier this week that the Bureau of Land Management has not maintained horse populations at sustainable levels because of a lack of funding.

“The BLM has underfunded the wild horse program for years and as a result, the livelihood of our local economies is now being threatened. For too long, Nevada has been forced to compensate for the federal government’s inability to manage these growing populations without the appropriate resources,” he said. “If the Department of the Interior refuses to adequately fund this program, the state will pursue all legal options to protect our local producers and communities.”

A BLM representative did not return a request for comment by time of publication.

An Elko County ranched said that his cattle have no forage because of horses.

“His story is reflective of the larger issue,” said David Stix Jr., Nevada Cattlemen’s president. “Producers across Nevada have faced and will continue to face grazing reductions unless the Department of Interior prioritizes this issue.” 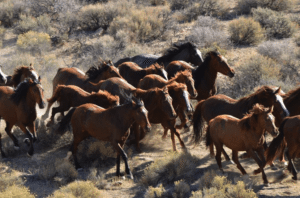 Horse populations graze year-round, and domestic livestock graze five to seven months out of the year, according to Sandoval.

“These horse numbers should not exceed the appropriate management levels set by the BLM,” said Hank Combs, Nevada Farm Bureau president. “According to the Wild Free-Roaming Horses and Burros Act of 1971 the federal government has a legal responsibility to manage these horse populations but even more importantly there is an environmental responsibility here as well.”

According to Nevada Association of Counties Executive Director Jeff Fontaine, “Overpopulation of horses not only affects livestock producers and wildlife habitat, but it also has a direct impact on local communities as well as county services.”