City Gets Candid Advice on Improving Its Corridor 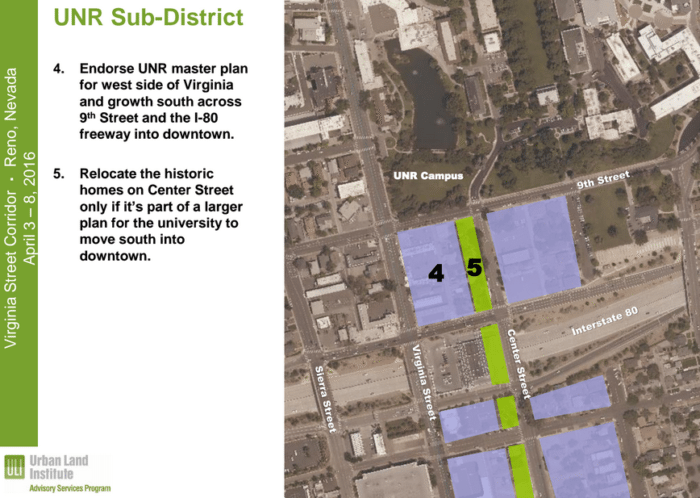 Giving their frank advice on the Reno corridor’s future, members of the Urban Land Institute held nothing back Friday, saying the city can “reach for the future or drift along without a paddle.”

“Success depends on your ability to grow and attract talent and you’re not aligned to succeed right now,” said Tom Murphy, Institute senior fellow and former mayor of Pittsburgh. “Your tax structure doesn’t work anymore. Your tax structure is based a city that used to be, not on a city you want to become. You’re set up now to survive, not to thrive.”

The city was seeking ideas from the Institute on how to increase the vitality of Virginia Street between South McCarran Boulevard and 17th Street, as well as two blocks east and west of the corridor. The presentation was held at Atlantis Casino Resort Spa. 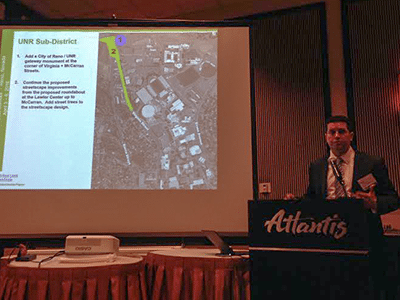 Staff from the Urban Land Institute, which provides technical assistance on urban issues to lawmakers, spent the week speaking with the public, touring and studying the corridor and determining how to strengthen it. The study cost $125,000.

Institute staff pointed out that the hospitality industry workforce is down 37 percent from 25 years earlier, while office related jobs are up 48 percent, education and health service careers have increased 46 percent and industrial employment has risen 15 percent.

“There is a huge secular change going on in your community,” said Walt Bialas, Institute vice president and market research director. “You need to work on retaining your job base and keeping your university students home.”

Making Virginia Street more distinct than other roads in Reno and increasing its intensity as people go from south to north would be ideal, Institute staff said. Virginia Street should be Reno’s “Main Street.”

Efforts should also be made to draw people and businesses to the riverwalk area, Murphy said.

The discussion about the future of the former Park Lane Mall site at South Virginia Street and Plumb Lane drew some enthusiasm.

“We hope this isn’t another strip mall with parking lots,” Todd Meyer, Institute director of planning and urban design, said to applause, noting that the area south of Midtown is “old and tired with urban sprawl.”

Instead, Meyer suggested buildings should be fronting South Virginia Street with interior parking, which will create a more urban edge.

Additionally, he said nobody should look at Interstate 80 as a metal barrier, but work to better integrate UNR and the city.

Meyer pointed out the “lid” over I-80 downtown where Walgreens sits and said a welcome center in that spot would be ideal.

“That’s one of the more interesting Walgreens locations in the country,” Meyer said, as the audience laughed.

Meyer also suggested providing the framework for development of more venues around UNR that will attract people before and after special events, such as ball games.

Councilman Oscar Delgado said he thinks the ideas presented will align with the updating of the city’s master plan, which helps elected officials and planners make decisions on things such as land use and economic strategy.

“I thought it was candid, clear and it gave us ingredients we need to ingest as a Council,” Delgado said. “As a Council, we need to take in the information and take in in phases. Not necessarily as a whole, but bites at a time.”

Being innovative might generate pushback and Murphy warned the public to “not get lost in getting potholes fixed and to give the city room to lead.”

“Some of you will say, ‘I like what Reno is,’” Murphy said. “The world’s going to run over you. You need to embrace change.”